Tourism was an early money-spinner in Tasmania, with Port Arthur featuring on travel circuits by the late 1800s.

In the years following the penal station’s closure in 1877, an influx of local and interstate tourists encouraged guides (including some ex-convicts) to set up shop at the settlement, walking visitors through the ruins and recounting horrors of the bad old days – for a fee.

One guide was known for presenting his own body as a ghoulish attraction, dramatically removing his shirt to display lash marks, or “stripes”, on his back to astonished onlookers.

Cinema played an important role in this early popularity of Port Arthur: the rise of the motion picture occurred in tandem with the site’s evolution from ruined penal settlement to premier tourist attraction.

Viewed today, these films raise important questions about the layers of historical meaning film can bring to a site like Port Arthur. They also highlight how long we have been fascinated by dark tourism.

Forgetting and remembering past horrors

These films played in cinemas to large audiences around the country. They highlighted Port Arthur’s convict heritage as a key part of the site’s allure.

This was in contrast to early attempts by the Tasmanian government to downplay or gloss over the state’s history in tourist campaigns. These focused on natural attractions instead.

Many who were crafting the state’s tourism image considered cashing in on convict horror to be harmful to its reputation. Guidebooks were at pains to reinvent Port Arthur as a pleasant seaside retreat, avoiding Tasmania’s convict history and preferring to highlight its “respectable” pioneers.

But travellers kept coming for the convicts.

Alongside Port Arthur, other local convict tourist attractions, including the Port Arthur Museum in Hobart and The Old Curiosity Shop at Brown’s River, also proved popular. 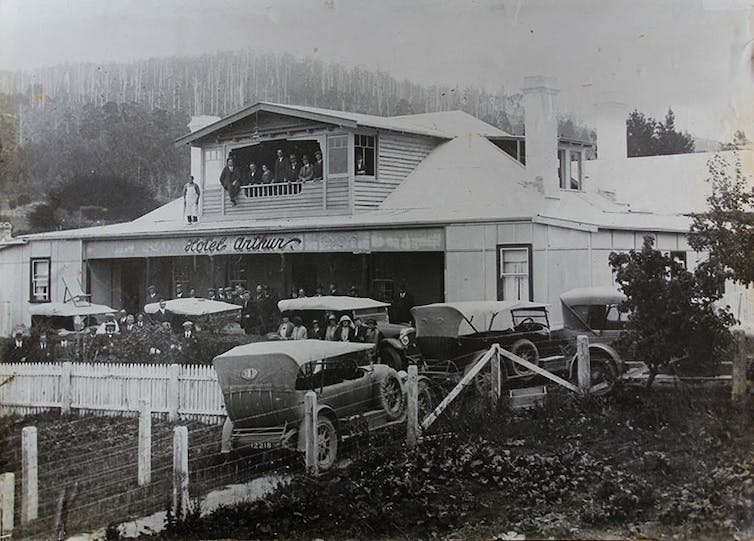 By 1918, there were two guest houses and a hotel at the former penal colony, catering to visitors wanting to stay overnight on the peninsula. The original jetty was extended to accommodate the increased water traffic.

As a site of punishment, Port Arthur remained the ultimate convict experience, and one of Australia’s earliest examples of dark tourism.

Scholars coined the term dark tourism to encompass the complex relationships between travel destinations and an interest in human trauma.

Alongside battlefields, Holocaust memorials and natural disaster remnants, prisons feature prominently as places of dark tourism globally. As historical sites of suffering, they elicit sympathy for their former inmates.

Read more: From trauma to tourism and back again: Port Arthur's history of 'dark tourism'

Port Arthur evoked this sympathy alongside the thrill of experiencing the horrors of convict punishment.

Meanwhile, the ruins and their surrounds offered the traditional pleasure of visiting a beautiful and wild landscape: representations in alignment with Tasmania’s evolving tourist image.

The coming together of these seemingly paradoxical experiences produced a unique site of convict memory.

Filmmakers were initially drawn to this unbeatable scenery.

Port Arthur’s buckling walls, roofless prison towers and rows of elm trees, oaks and briar roses were splashed across cinema screens around the country to the delight of moviegoers. 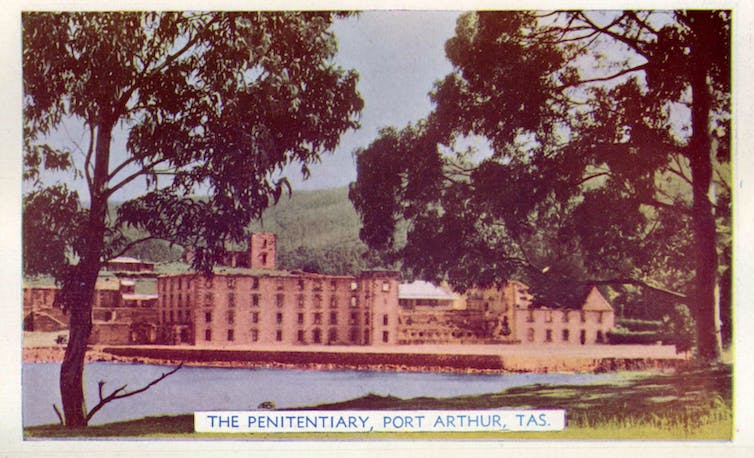 Postcards from 1950 capture how the site was advertised to tourists. State Library Victoria

Tasmania promoted itself as having a history of industrious state-building. In keeping with this theme, travelogues recast convicts as skilled craftsmen.

In films like See Tasmania First (1935) and Hobart Town (1952), convict-constructed buildings and bridges and the ruins at Port Arthur are presented as pre-industrial marvels and seeds of the state’s enduring progress.

These films describe the “honest” colonial structures “whose simple dignity and beauty redeems the characters that built them”.

Travelogues, including the Frank Hurley-directed Isle of Many Waters (1939), Tasmania: Gem of the South Seas (1951) and the Cinesound-produced Tasmania: A Southern English Garden (1946), feature Port Arthur as a star attraction in a gallery of scenic delights.

Accompanied by swelling orchestral soundtracks and jaunty narration, the audience is carried along from one attraction to the next, including apple orchards, mountain climbs and copper mines.

When it comes to Port Arthur, panoramic shots usually introduce the ruins, followed by close-ups detailing the site’s Gothic architecture. Sometimes, travellers or tour guides are featured, wandering through the grounds to provide scale.

But, overwhelmingly, it is Port Arthur’s scenery in the spotlight.

It was imagery evoking the medieval castles of Great Britain. This recognisably nostalgic aesthetic must have satisfied a yearning in many Australians for a romanticised historical connection to England that transcended tales of convict transportation.

Tasmania’s famed natural beauty was also enlisted to deal with the legacy of Port Arthur’s convict history. Since its closure, the prison had been overrun by nature, ravaged by bushfires and invaded by vegetation.

The remaining timeworn aesthetic allowed filmmakers to locate Port Arthur in a past disconnected from the modern day, with narration claiming the ruins were “ancient” and “relics of a bygone era”.

Characterising Port Arthur in this way gave audiences permission to reflect on the majesty of the ruins – and the convict histories they evidenced – from the safety of a distant present.

Travelogues like Ken G. Hall’s Ghosts of Port Arthur (1932) walked a finer line between sensationalising the convict experience and presenting Port Arthur as a benign scenic location. Screening widely, it was one of the most popular and longest-running Tasmanian travelogues of the 1930s.

Advertised as a “travel-fantasy”, Hall’s film is a meditation on the grim history of the penal settlement. Its narrative intercuts melodramatic vignettes of convict punishment taken from an earlier popular silent cinema adaptation of Marcus Clarke’s For the Term of His Natural Life (1927) with contemporary scenes of sightseers at Port Arthur.

The brazenly recycled footage suggests Hall recognised the centrality of Clarke’s convict mythology and its recent revival on screen to the cultural currency of the site.

At the time of its production, For the Term of His Natural Life was the most expensive Australian feature film ever made and the key visual text informing a popular understanding of the convict experience during the 1930s.

Many of the film’s scenes had been produced on location at the ruins. This includes the famous “glass shot”, where the roofs of the penitentiary and other buildings were “restored” by placing a pane of glass between the scenery and the camera, with the roofs and other features painted onto the glass.

By using sequences from For the Term of His Natural Life in his travelogue, Hall was likely acknowledging the lure of Port Arthur was not only of a former convict prison, but also the chance to visit the location of a blockbuster film.

On the ground at Port Arthur, For the Term of His Natural Life’s impact is further reflected in tourist accounts written during the 1930s. Visitors reported being haunted by convict ghosts re-enacting scenes from the film before their very eyes as they strolled through the ruins.

Ghosts of Port Arthur both recognised and reinforced the important role cinema played in shaping visitors’ expectations at the ruins and the historical memories they evoked.

Visitors searching for the convict experience confronted both real and imagined landscapes, constructed from memories of a penal settlement already experienced through film.

Though many Australians avoided, and even fostered, an ignorance of the nation’s convict story until the 1960s, the Port Arthur travelogues acknowledged the ruins as lying at the heart of Tasmania’s historical imagination.

As the closing narration in the Cinesound-produced travelogue Historic Port Arthur asserted, by 1946 tourists at the ruins required little prompting to:

make contact for a little while with one of the most poignant chapters of Australian history … To breathe life into the old shades that time could only partly hide. Beneath the crust of the years there are some things we cannot forget.

Travelogue films framed Port Arthur as a place to remember Australia’s convict past, both on and off screen, helping to reconfigure the ruins as a site of convict memory.

In doing so, cinema imbued a nation’s monument to its convict origins with new ghosts.