James Murdoch is not the most obvious candidate for editorial heroism. His route to resigning from the News Corp board because of “disagreements over certain editorial content” has been circuitous and colourful.

James’s first major managerial role in his father’s media empire was to run the Star satellite services and News Corp’s Asian operations in Hong Kong from 2000 to 2003. He had mixed commercial success in this period, which is best remembered for his determination to gain access to the Chinese market by currying favour with the government.

He accused Western media of painting a falsely negative portrayal of China through their focus on controversial issues such as human rights and Taiwan. In 2001, he advised Hong Kong’s democracy movement to “accept the reality of life under a strong-willed absolutist government”. In one of his dealings with China, he agreed that Murdoch’s cable channels around the world would take China’s propaganda channel CCTV9.

In 2003, he was promoted to run BSkyB in London, where he lived for the best part of the next decade, and where he successfully expanded Murdoch’s satellite services.

He gained early notoriety with a confrontational speech at the Edinburgh International Television Festival. Here he celebrated the digital age and the dynamism of the market, and equated people who still believed in regulation with “creationists”. There was no doubt about his primary target:

To let the state enjoy a near monopoly of information is to guarantee manipulation and distortion.

Yet we have a system in which state-sponsored media – the BBC in particular – grow ever more dominant. That process has to be reversed.

It takes a particularly agile propagandist to find the Beijing regime so benign and the BBC so sinister.

James’s main aim at the time was to effect a total takeover of BSkyB, raising News Corp’s current share of 40% to 100%. The importance of BSkyB to the Murdoch empire was demonstrated by James’s boldest and most ruthless action. In 2006, the newly formed Virgin Media group was negotiating a merger with ITV. The new group’s cable operations would have the potential to provide tougher competition for BSkyB’s satellite service.

Overnight, James swooped, buying 17.9% of ITV for a cost of GBP 940 million. This made News Corp ITV’s biggest shareholder and messed up the intended deal.

News’s move was always likely to be deemed illegal, but by the time this was finally decided nearly four years later, the challenge was dead. News lost GBP 340 million pounds on its forced sale of ITV shares, but no doubt Rupert and James thought this had been a good investment to protect BSkyB’s market share.

After the 2010 election of the Cameron government in the UK, BSkyB looked to be within reach, but James was increasingly impatient with any procedural obstacle or criticism of the attempt. His mentality at the time was on show in an incident in the lead up to the election. The Independent newspaper ran a series of advertisements proclaiming its independence and urging its readers to consider their vote. One such ad ran “Rupert Murdoch won’t decide this election, you will”.

James’s response was bizarre. He and Rebekah Brooks arrived unannounced at the paper, and James yelled at the editor, Simon Kelner, in front of bemused journalists that he was a “fucking fuckwit”, among other things. 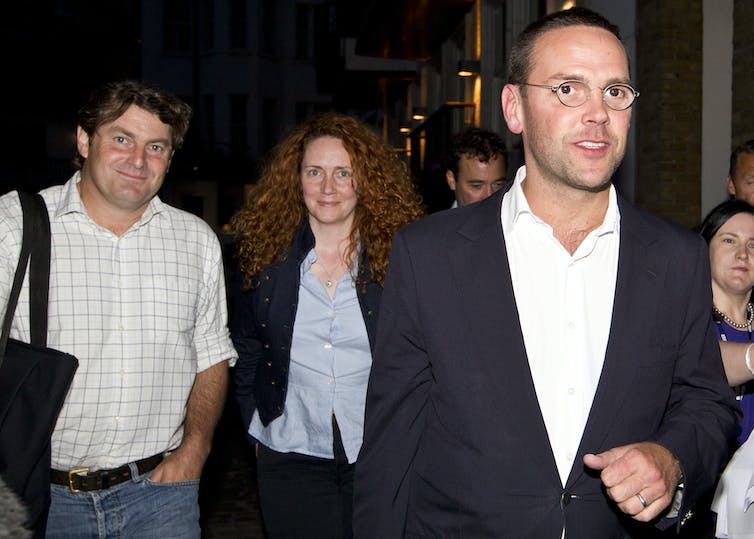 James Murdoch with Rebekah Brooks in 2011.

James’s hopes for BSkyB were about to be washed away by a scandal, which did him and the company enormous damage. After the outstanding investigative efforts of Nick Davies, the Guardian published that Murdoch’s News of the World had hacked the phone of a kidnap victim Milly Dowler. This not only created immediate outrage but opened the door for many further revelations about the illegal methods and invasions of privacy by the tabloids to follow. Parliamentary hearings, court cases, and eventually the Leveson inquiry all put the company’s illegal and unethical practices into public view.

At first the arrogance of the Murdoch camp was undented. In private, chief editorial executive Rebekah Brooks said the story was going to end with Guardian editor Alan Rusbridger on his knees begging for mercy.

James, as News Corp’s senior executive in Britain when the scandal broke, found his own actions under scrutiny. His denials, prevarications and lack of remorse did not help the company’s cause. His appearances before the parliamentary committees were disastrous. At the end of his testimony, Labour member Tom Watson said

Mr Murdoch, you must be the first mafia boss in history who didn’t know he was running a criminal enterprise.

James left London for New York and his promised promotion in the company. But his reputation was in tatters, even with other members of the family. His public persona at this time consisted of neo-liberal politics and corporate ruthlessness, with his actions untroubled by ethical considerations.

Yet, now, this corporate and family loyalist has resigned from his last official position with the company. James has long seen the urgency of combating global warming. As early as 2006, largely at his urging, Rupert also embraced the issue. Rupert soon retreated from the cause, but James’s commitment continued.

Rupert’s conversion had surprisingly little impact on the company’s journalism. Its upper editorial echelons contained a large number of climate denialists, and Rupert seems to have never made any effort to change their views.

Read more: Naming and shaming two young women shows the only 'enemies of the state' are the media

In addition, James’s wife, Kathryn, is by the rather special standards of the Murdoch family, a liberal and a progressive. She has been involved in several environmental organisations, and James and Kathryn have donated to several Democratic candidates, including most recently the presidential campaign of Joe Biden.

James made a rare public criticism of the company last Australian summer. He accused News Corp of promoting climate denialism during its coverage of the Australian bushfires.

However the key events are probably in America. At the same time that James and Kathryn have been edging left, the Murdoch organisation has been moving ever further to the right. The commercial success and political impact of Fox News have doubtless shaped Rupert’s thinking and the whole company’s journalism has become more Foxified.

There has rarely if ever been an alliance of president and media company like that of Trump with Fox News. He is their chief publicist and they an uncritical avenue for his views, especially to his base. So far, it has probably worked out well for both.

Read more: From irreverence to irrelevance: the rise and fall of the bad-tempered tabloids

However, the dangers are acute, especially as Trump’s popularity wanes. Moreover, an erratic president such as Trump poses problems for the credibility of those who seek to embrace his every twist and turn.

This year’s pandemic, economic and racial problems have given a new urgency to these issues. Over the past six months, there have been more than double the fatalities Americans suffered in over 12 years in the Vietnam War. It is hard to remember any leadership failure approaching Trump’s catastrophe on COVID-19. Some early studies suggested Trump’s denialism, echoed by Fox, meant their viewers had more false beliefs about the pandemic than Americans who consumed mainstream media.

After Trump’s comments after a white-supremacist rally in Charlottesville, James donated $1 million to the Anti-Defamation League.

James has taken a principled stance, but it is also pragmatic. Since the sale of the bulk of Murdoch’s 21st Century Fox assets to Disney (of which James was chief executive), there is no future role for him in the corporation.

By also resigning from the News Corp Board, he will be freer to express his own views, and perhaps have the chance to watch from a distance as Trump is defeated and Fox heads into decline together in the coming months.