Most of us are living through a year that is unprecedented in our lifetimes. Too young to remember the Spanish flu, we’ve grown up in a world where we take Western wonder drugs and life-saving vaccines for granted. We have no memory of a time when disease brought the world to a standstill or shut down entire economies. We could not have predicted life in Melbourne in 2020 would include a 5-kilometre travel limit or a curfew.

A longer view of history reminds us we are not the first community to experience and reflect on life during a time of plague or pandemic. So what might we learn from history as we continue to navigate life during a pandemic?

Read more: Pray, but stay away: holding on to faith in the time of coronavirus

We want to blame someone

Given the ubiquity of religion in most human communities throughout history, it is not surprising reflections on pandemics often begin with God. Plagues and diseases on such a scale feel “biblical” in the sense they are beyond the norm and therefore supernatural in some way. While modern science gives us insight into COVID-19, we still look for someone, anyone, to blame for its presence.

In antiquity, that someone was often God.

One of the earliest records of plagues comes from the Hebrew Bible. Anyone who has celebrated Passover, read the biblical book of Exodus, or seen the animated Dreamworks movie Prince of Egypt will be familiar with the plagues that Moses (or God) unleashed on Egypt when Pharaoh would not free the enslaved Hebrews.

Not all of the plagues were disease, but they all brought destruction and potential death. In that ancient narrative, a plague served two functions: it is divine punishment for injustice, and an assertion of religious power in the battle between Egypt’s gods and the god of the Hebrews. In the Hebrew Bible texts, Pharaoh’s refusal to release the slaves is to blame. It is his fault.

Throughout history, humans have sought explanations for things that are beyond our normal control or understanding. While God is often credited as the sender of plagues or pestilence – usually to teach some moral lesson – we tend to focus our wrath on human scapegoats. In the 1980s, the HIV-AIDS viral pandemic was blamed on the gay community or Haitians, revealing the racism and homophobia behind such views.

US President Donald Trump’s constant reference to COVID-19 as the “China virus” reflects a similar desire for a scapegoat. In its worst form, the blame game leads to widespread retribution against anyone identified with that group.

Role of government is key to protecting the community

Another link with the past is the role of government in containing disease. Governments have for centuries used quarantine as a way to preserve public health, often with great success.

Yet resistance to forced quarantine has an equally long history, with reports of those in isolation being “unruly” and needing to be contained during the Great Plague in 17th-century England. During this period, quarantine procedures made a marked difference to the mortality rate when comparing cities. 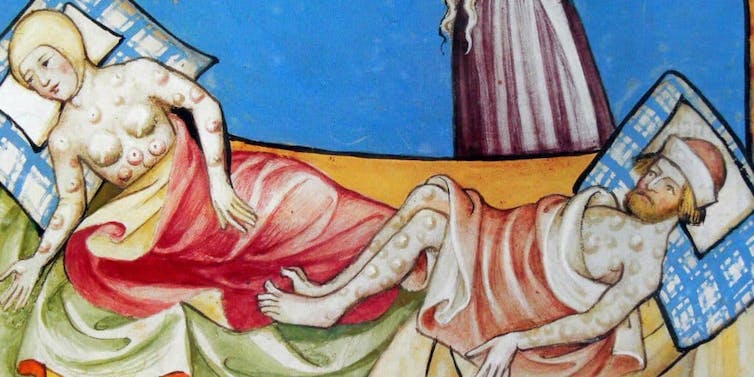 The Black Plague in England of the 1660s was widely believed to be an act of God. historic-uk.com

Balancing individual freedom with the health of whole communities is a tricky business. Karen Jillings’s work on the social history of the plague in 17th-century Scotland shows that, while physicians, magistrates and preachers all regarded the plague as supernatural (either directly from God or by God working through nature), the responses of those of faith differed.

Jillings describes the arrest of a Scottish preacher in 1603 for refusing to comply with the government’s health measures because he thought they were of no use as it was all up to God. The preacher was imprisoned because he was viewed as dangerous: his individual freedoms and beliefs were deemed less important than the safety of the community as a whole.

Being religious does not mean being anti-science

Being a person of faith, however, does not necessarily make one anti-science.

COVID sceptics take a wide variety of forms in contemporary culture, including anti-religious conspiracy theorists. Yet anti-science views are often associated with people of faith thanks, in part, to some now tragic examples from North America. 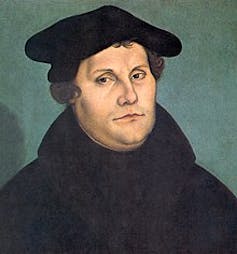 Martin Luther cared for the dying during the plague. Wikicommons

One example of a cleric who did not pit faith against reason was Martin Luther, the 16th-century theologian and reformer. Luther wrote about living through the plague in a pamphlet titled Whether One May Flee from a Deadly Plague.

Oxford University professor Lyndal Roper writes that while many fled Wittenberg in 1527 when the plague struck, Luther stayed out of a sense of duty to help nurse and care for the dying. This is what he thought all leaders should do.

His staying was not the decision of a martyr, nor was it born of a naïve idea that God would necessarily save or protect him. Luther, writes Roper, “advocates social distancing”, the use of hospitals, and necessary precautions according to the science of his time. While he believed that God was ultimately in control, he also affirmed human responsibility. Luther harshly condemned those who went about knowing they were sick and spreading the disease.

A historical perspective does not make living through a pandemic easy. But perhaps there is a small comfort in realising we are not the first community to live through such times, and neither will we be the last.

The things we find hard to balance – individual freedoms versus the group, accountability versus blame, science versus personal beliefs – are centuries old and deeply human.

And, like others in centuries past, we too are capable of incredible acts of care and sacrifice for the sake of the sick and vulnerable.