Imagine constantly living with mice. Every time you open a cupboard to get linen, clothes or food, mice have been or are still there. When you go to sleep they run across your bed and, in the morning, your first job is to empty traps filled with dead mice. And the stench of dead mice fill the streets.

Even the cats and dogs get sick of mice and stop chasing them.

This is the dystopian reality for many towns as, over recent months, mouse numbers in northern NSW and southern Queensland have risen to plague proportions, devastating summer crops and fodder storages. One farmer told me he’s removing 100 dead mice from his swimming pool each night.

This week, for example, truckloads of sorghum from Southern Queensland farms have been rejected from sale after mouse droppings were discovered. This means loads of grain need to be cleaned before they’re suitable for sale.

No one ever forgets living through a mouse plague.

One of the largely unquantified repercussions of mice is the social and mental health impact on farmers, their families and rural communities — places only just starting to recover from the recent, devastating drought.

I work with scientists and rural communities to reduce the impact of mice. So, with no end to the plague in sight, let’s look at the issue in more detail.

The earliest accounts of mouse outbreaks in Australia are from the late 1800s, after the house mouse, Mus musculus, was likely introduced in the late 1700s as stowaways with the First Fleet. Similar plagues are uncommon in other countries — even though mice are found worldwide — as favourable climates lead to lots of food and shelter, which sustain high mouse populations in Australia.

Outbreaks like we’re seeing now tend to follow a run of dry years. The house mouse is very well adapted to live in Australian conditions, and they can survive through protracted dry periods and thrive when there’s lots of food and moisture. While often not conspicuous, they’re present in most environments — all the time.

They start breeding at six-weeks old and give birth to a litter of six to ten pups every 19 to 21 days after that. After giving birth to one litter, females can immediately fall pregnant with the next litter, meaning there’s no break in the production of offspring.

In good seasons, when the rate of survival is high, the rate of population increase is dramatic. A single pair of mice can give rise to 500 mice in a breeding season. This year, the breeding season has lasted through summer and into autumn, as the weather has been milder with lots of rain.

Mouse outbreaks or plagues occur across the cropping zone — the extensive area where crops are grown in Australia — approximately every five years. However major outbreaks like the one we’re experiencing today are less frequent.

In some towns across the cropping zone, the smell of dead and decomposing mice is becoming a significant problem in shops, rubbish bins and under buildings and homes, where mice that have been baited have gone to die.

And the outbreak is growing. I’m getting reports from farmers of high mouse numbers from other parts of the cropping zone, through southern NSW, Victoria and South Australia. 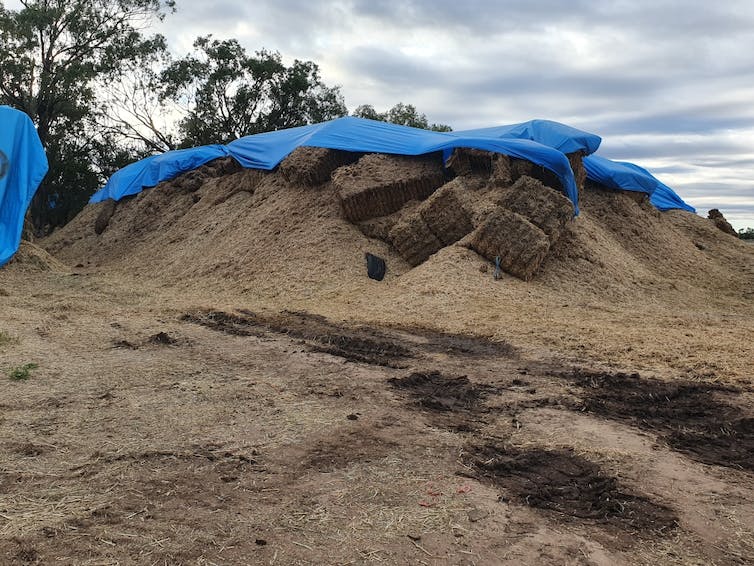 Mice can cause damage during all stages of crop growth, and they don’t limit themselves to cereals. Farmers have reported significant damage in canola, lentils and other pulse crops. Likewise, mice removing freshly sown seed, browsing shoots and feeding on developing heads and seed pods all reduce crop yield.

Mice also cause significant damage to on-farm storages of grain and fodder. Contamination of grain with mouse faeces can lead to grain distributors and export markets rejecting produce (such as with sorghum in Southern Queensland).

Read more: How to know if we’re winning the war on Australia’s fire ant invasion, and what to do if we aren't

This year has been so bad, farmers say they’re giving up on efforts to control mice with bait, and instead ploughing their summer crops back into the ground. Other desperate measures include burying entire haystacks to protect them from total decimation by mice.

The cotton industry, rarely impacted by mice, has even sought an emergency permit to allow control of mice in cotton crops using zinc phosphide baits, the only approved chemical control measure for mice in broad-scale agriculture in Australia.

So how does this horror end?

The drivers for the end of a mouse outbreak are not well understood. It’s thought a combination of high numbers, food running short and disease leads to mice turning on each other, eating sick and weak animals and offspring, resulting in a dramatic crash in the population. Farmers, in previous outbreaks, have reported mice disappearing almost overnight. 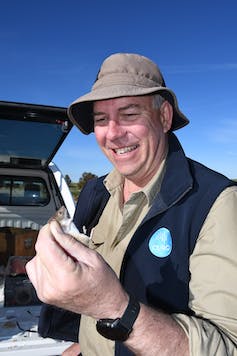 CSIRO is developing strategies to reduce the impact of mice in agriculture. Sharon Watt, Author provided

CSIRO, with the support of the Grains Research and Development Corporation, is working on developing a range of new ways to reduce the impact of mice in crop production systems. Key focuses include monitoring populations to make predictions about future outbreaks and developing of better predictive models.

Still, the introduced house mouse will be an ongoing problem in Australian farms and rural communities for years to come. We must urgently find ways to reduce the economic and social impact of mice, not only for the sustainable production of crops, but also for the mental well-being of rural communities.

Read more: Shy rodents may be better at surviving eradications, but do they pass those traits to their offspring?