In a small, isolated village in southern Sydney, the local sulphur-crested cockatoos are particularly clever. Once a week, when the neighbours roll their wheelie bins to the curb, cockies fly over and, with skillful dexterity, open the lids in search of food.

It may seem as though cockatoos opening a curb-side bin lid is a simple action. But our research, published today in Science, discovered this behaviour is far more significant than you may have first thought.

Sulphur-crested cockatoos are copycats. After one solves the lid-flip puzzle, other birds nearby imitate the new foraging behaviour in a stunning display of “social learning”.

For decades, scientists believed humans were the only animals capable of culture. Now, thanks to the community’s observations, we can add parrots to this small (but growing) list, which also includes chimpanzees, humpback whales and New Caledonian crows.

In Australia, sulphur-crested cockatoos (Cacatua galerita) are often thought of as being in your face, full of attitude and mischief. But if we take the time to observe them, we can see they’re also intelligent, curious and adaptable.

You might have seen a variety of their social interactions, such as play. Have you watched cockies hanging on powerlines like a trapeze artist?

Cockatoos are also highly dexterous, holding food with their foot and manipulating it with their beak and tongue. This includes skillfully eating the seeds from a gardener’s mortal enemy — the bindii weed — and lessor foes, such as onion grass. 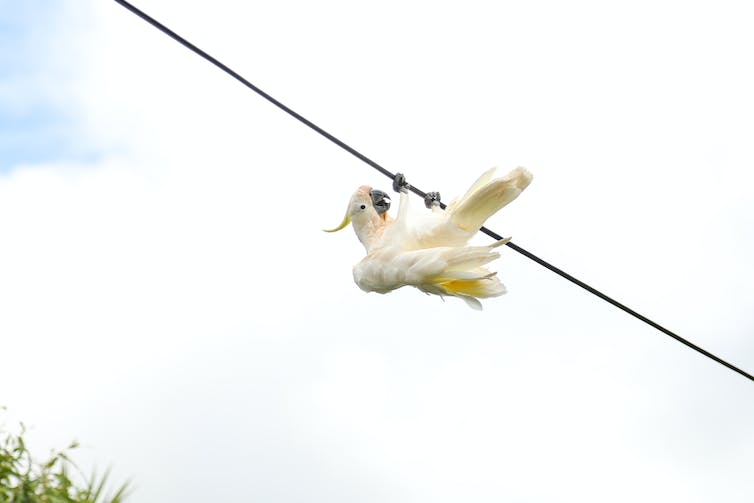 Cockatoos love to play, and swing on powerlines like trapeze artists. Shutterstock

But bin opening is a new foraging behaviour that hadn’t been observed until recently. Thankfully, one member of our research team lives in the local area, and saw cockatoos opening bins firsthand in 2014.

This kicked off our bin-opening survey in 2018, where we asked community members to report if they “have” and, importantly, “have not” observed bin opening across the greater Sydney region and beyond.

Thanks to these reports and our own observations, we soon discovered this behaviour spread to neighbouring suburbs over the following years.

Read more: Don't disturb the cockatoos on your lawn, they're probably doing all your weeding for free

We also found that between suburbs, where the birds’ social networks were separated, there were subtle differences in bin-opening styles, and these became increasingly different between suburbs further apart.

Only around 10% of birds in each flock learned how to open bins. The rest benefit from the behaviours of these pioneers. Interestingly, we found adult males were most likely to know how to open bins. Adult females and juveniles also displayed this behaviour, but to a lesser extent. 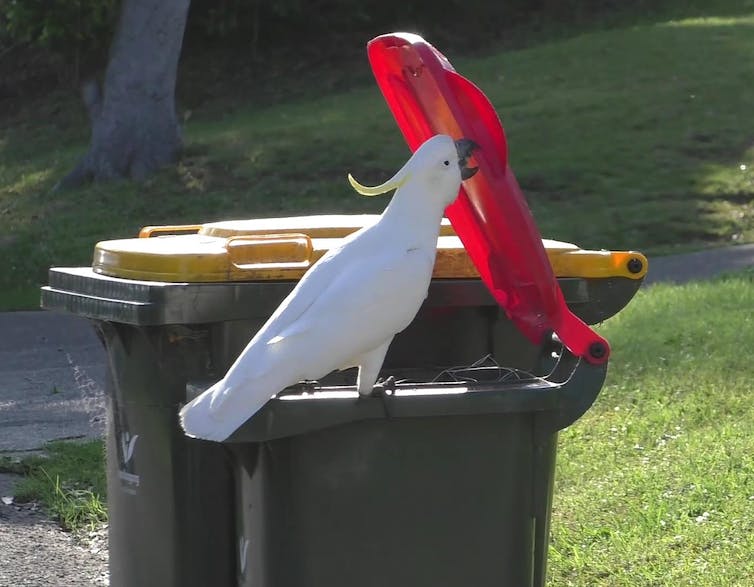 Cockatoos use their feet and beak to lift open the the wheelie bin lid. Barbara Klump, Author provided

What’s all the fuss about, anyway?

To many of us familiar with the cleverness of cockatoos, it might come as no surprise they can learn by watching each other. So in case you aren’t as fascinated as we are by this discovery, here are a couple of reasons to get excited.

First, it shows we can all make interesting scientific observations in our everyday lives — even in the suburbs where we live.

Second, only 70 odd years ago, humans started questioning the idea only human society was culturally complex. Humans are masters of social learning. From an early age, we copy skills from other children and adults.

But this study helps reaffirm that a range of other animals are also culturally complex.

Read more: Birds that play with others have the biggest brains - and the same may go for humans

There are three main traits associated with so-called “cultural animals”: larger brain size, living in social groups, and being long lived. This is known to scientists as the “cultural intelligence hypothesis”.

And when lands change, for example, for urban growth or agriculture, it stimulates the emergence and spread of adaptive behaviours. This creates new opportunities for cultures to develop. 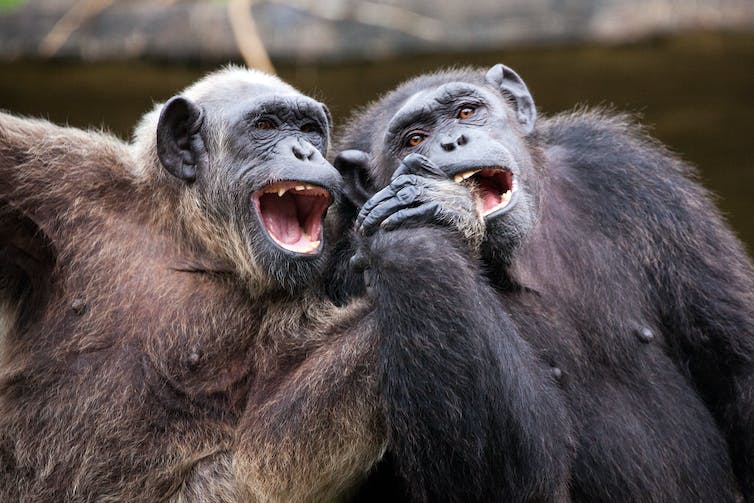 Chimpanzees and other primates are among the few animal groups known to be capable of social learning. Now, we can add parrots to this list. Shutterstock

Cities and urban areas provide fertile grounds for this, as animals that live there often have to change their behaviours to exploit different foods and shelter options, and to survive new threats — think cats, rats, and cars.

It’s likely most of us have observed animals adapting to new environments. A classic example from Sydney is the bin-chicken — aka Australian white ibis. These birds also forage in bins (but not opening the lids) and now nest in urban palm trees rather than their traditional flooded wetland reed beds.

Another fascinating example is grey-headed flying-foxes. Despite being vulnerable to extinction due to population decline and habitat loss, these bats have become more common in urban areas over recent decades. This has required adaptation to lights, noise, humans, and the different flowers and fruits we grow in our gardens, parks and streets.

Adaptive behaviours like these are assumed to be the result of genetic change, or innovations. The challenge is to confirm if these innovations spread via social learning through the population, resulting in new, adaptive cultures emerging. 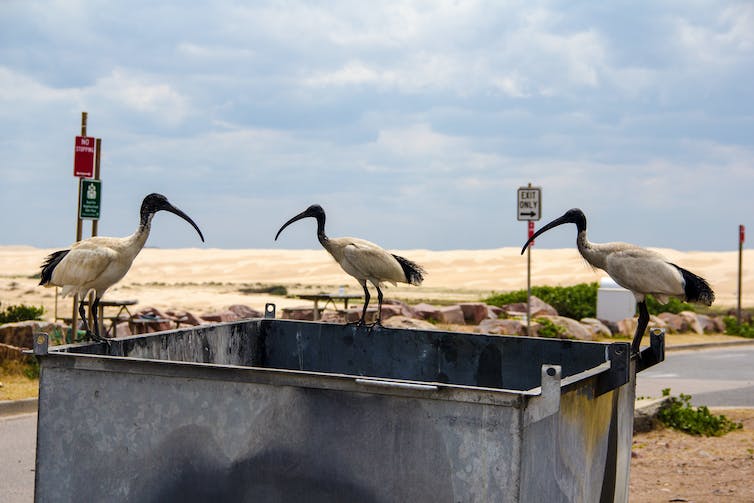 You may find bin chickens annoying, but they are incredibly resilient, adaptive birds. Shutterstock

How you can make a difference

Cities are also full of people who can share observations of innovative behaviours, and we encourage you to get involved in citizen science.

A major benefit of community participation in science is increased geographic coverage in a short amount of time. Individual scientists can only survey a small number of sites, but by involving the community, we can cover large parts of a suburb, city, or a country at the same time.

There are dedicated citizen science projects you can participate in, such as our Big City Birds research. We use this app to learn about nesting, foraging, nocturnal roosts, and adaptive behaviours of birds across Australia (and not just in the big cities).

Other recommended projects include eBird, iNaturalist, DigiVol, FrogID, and Urban Field Naturalist. It even helps to share any interesting observations through social media, an indirect way to inform scientific research. To help us, you can tag @Big_City_Birds or use this hashtag: #BigCityBirds.

With a range of similar studies underway, it’s likely scientists will discover more evidence of culturally complex behaviours in other species, continuing to challenge our idea of what it means to be human.