In July, a new date was published that pushed the opening chapters of Australian history back to 65,000 years ago. It is the latest development in a time revolution that has gripped the nation over the past half century.

In the 1950s, it was widely believed that the first Australians had arrived on this continent only a few thousand years earlier. They were regarded as “primitive” – a fossilised stage in human evolution – but not necessarily ancient.

In the decades since, Indigenous history has been pushed back into the dizzying expanse of deep time. While people have lived in Australia, volcanoes have erupted, dunefields have formed, glaciers have melted and sea levels have risen about 125 metres, transforming Lake Carpentaria into a Gulf and the Bassian Plain into a Strait. 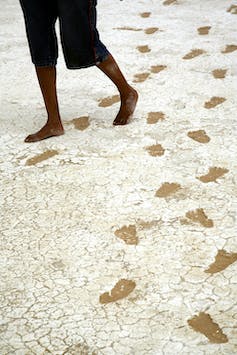 Australia’s Indigenous history has been pushed back into deep time. Michael Amendolia/AAP

How are we to engage with a history that spans 65,000 years? There is a “gee whiz” factor to any dates that transcend our ordinary understanding of time as lived experience. Human experiences are reduced to numbers. And aside from being “a long time ago”, they are hard to grasp imaginatively.

It is all too easy to approach this history as one might read the Guinness Book of Records, to search the vast expanse of time for easily identifiable “firsts”: the earliest site, the oldest tool, the most extreme conditions. The rich contours of Australia’s natural and cultural history are trumped by the mentality that older is better.

To political leaders, old dates bestow a veneer of antiquity to a young settler nation. To scientists, they propel Australian history into a global human story and allow us to see ourselves as a species. To Indigenous Australians, they may be valued as an important point of cultural pride or perceived as utterly irrelevant. Their responses are diverse.

Further reading: Buried tools and pigments tell a new history of humans in Australia for 65,000 years

Recently, one of us, Lynette Russell, asked 35 Aboriginal friends and colleagues of varying ages, genders and backgrounds for their thoughts about Australia’s deep history.

Many of the responses were statements of cultural affirmation (“We have always been here” or “We became Aboriginal here”), while others viewed the long Indigenous history on this continent through the lens of continuity, taking pride in being members of “the oldest living population in the world” and “the world’s oldest continuing culture”.

As expressions of identity, these are powerful statements. But when others uncritically repeat such notions as historical fact, they risk suggesting that Aboriginal culture has been frozen in time. We need to be careful not to echo the language of past cultural evolutionists, who believed, in Robert Pulleine’s infamous words, that Aboriginal people were “an unchanging people, living in an unchanging environment”. 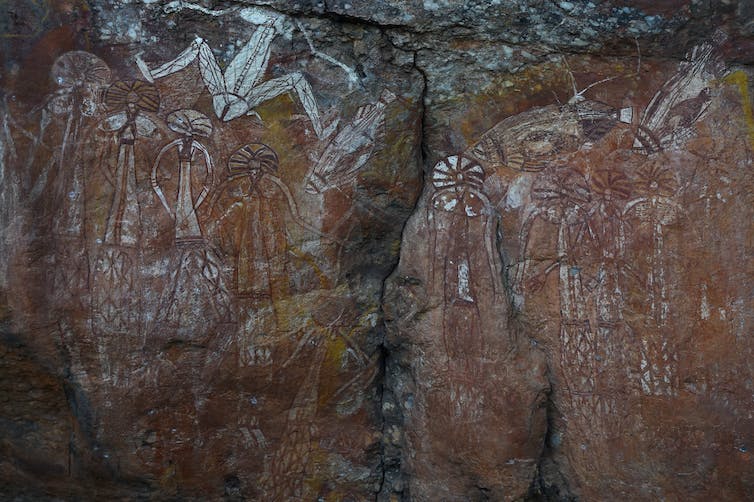 This article seeks to move beyond the view of ancient Australia as a timeless and traditional foundation story to explore the ways in which scientists and humanists are engaging with the deep past as a transformative human history.

The revolution in Australia’s timescale was driven by the advent of radiocarbon dating in the mid-20th century. The nuclear chemist Willard Libby first realised the dating potential of carbon-14 isotopes while working on the Manhattan Project (which also produced the atom bomb). In 1949, he and James Arnold outlined a way to date organic materials from a couple of hundred years old to tens of thousands of years old. The key was to measure the memories of time preserved in carbon atoms.

By comparing the decaying isotope, carbon-14, with the stable isotope, carbon-12, they were able to measure the age of a sample with relative precision. The rate of decay and amount of carbon-14 provided the date.

“A new time machine has been invented”, Australian archaeologist John Mulvaney declared when he realised the implications of the method. In 1962, he used the new technique at Kenniff Cave in the central Queensland highlands and was stunned to discover that Australia had been occupied during the last Ice Age. The dates of 19,000 years overturned the long-standing idea that Australia was the last continent to be inhabited by modern humans and the artefacts he uncovered in his excavations revealed a rich history of cultural adaptation. 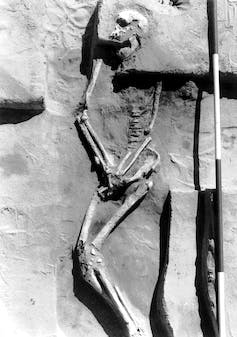 The remains of Mungo Man. AAP

The following decade, at Lake Mungo, Australia’s human history was pushed back to the limits of the radiocarbon technique. A sample from spit 17 of Mulvaney and Wilfred Shawcross’ excavations at Lake Mungo revealed that the ancestors of the Mutthi Mutthi, Ngyiampaa and Paakantji peoples had thrived on these lakeshores over 40,000 years ago. Geomorphologist Jim Bowler also revealed the dramatic environmental fluctuations these people endured: what is now a dusty and desiccated landscape was then a fertile lake system with over 1000 km2 of open water.

The date of 40,000 years had a profound public impact and announced the coming of age of Australian archaeology. The phrase “40,000 years” quickly appeared on banners outside the Tent Embassy in Canberra, in songs by Aboriginal musicians and in land rights campaigns. When the bicentenary of European settlement was marked on 26 January 1988, thousands of Australians protested the celebrations with posters reading “White Australia has a Black History” and “You have been here for 200 years, we for 40,000”. The comparison magnified the act of dispossession. 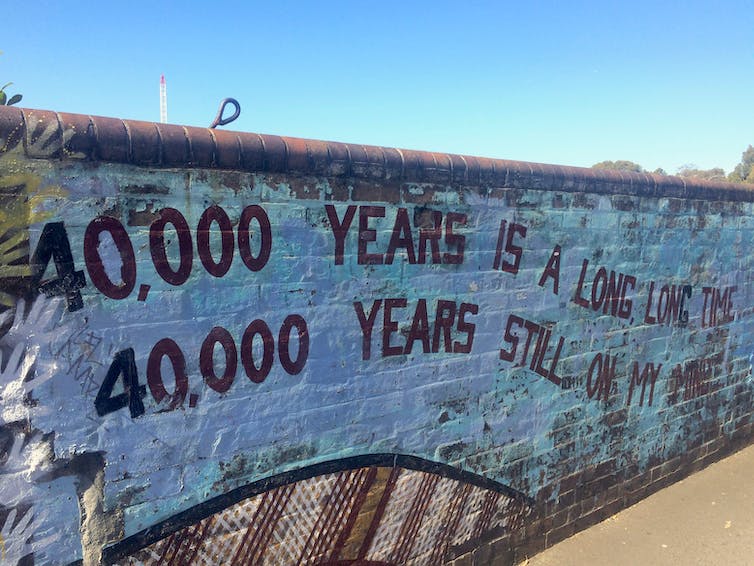 A mural in Redfern, Sydney, based on the lyrics of the Joe Geia song ‘40,000 Years’. Billy Griffiths

The discovery of 65,000 years of human occupation at Madjedbebe rock shelter on Mirrar land, at the edge of the Arnhem Land escarpment, draws on a different dating method: optically stimulated luminescence. This technique analyses individual grains of sand and the charge that builds up in their crystal quartz lattice over time. By releasing and measuring this charge, geochronologists are able to reveal the moment a grain of sand was last exposed to sunlight.

The archaeological site at Madjedbebe is far more than an old date; it reveals a long and varied history of human occupation, with evidence of profound cultural and ecological connections across the landscape, cutting edge Ice Age technology (such as the world’s earliest ground-edge axe) and dramatic environmental change.

Perhaps most evocatively, throughout the deposit, even at the lowest layers, archaeologists found ochre crayons: a powerful expression of artistic endeavour and cultural achievement. 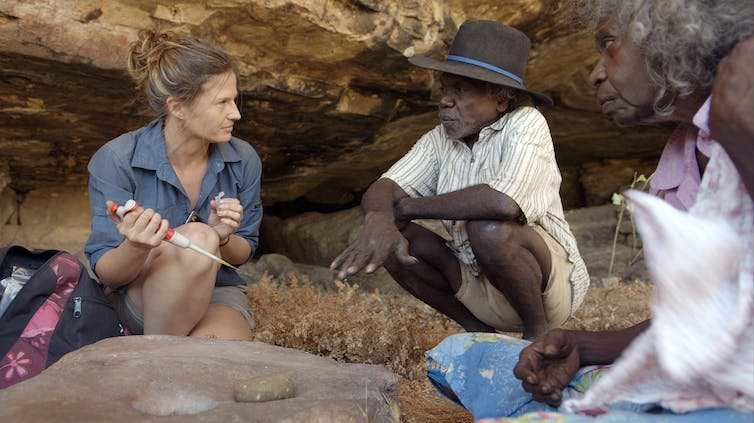 In the wake of the discovery, in August 2017, Prime Minister Malcolm Turnbull seized upon the new date in his speech at Garma, singling out the possibilities of this deep time story for political reconciliation:

I am filled with optimism about our future together as a reconciled Australia. Last month scientists and researchers revealed new evidence that our First Australians have been here in this land for 65,000 years. … This news is a point of great pride for our nation. We rejoice in it, as we celebrate your Indigenous cultures and heritage as our culture and heritage – uniquely Australian.

Although Turnbull revels in the deep time story, his speech avoids reflecting on the more recent past. Here is a statement of reconciliation that does not address the estrangement that it is seeking to overcome. As such it opens itself up to being dismissed as simply a prolonged platitude.

We cannot engage with the past 65,000 years without acknowledging the turbulent road of the past two centuries.

A story of rupture and resilience

When Europeans arrived in Australia in the 17th and 18th centuries they were setting foot onto a land that had been home to thousands of generations of Indigenous men and women. These groups lived along the coasts and hinterlands and travelled into the mountains and across stone plateaus; they thrived in the harsh deserts and gathered in great numbers along waterways and rivers.

Although Australia is a continent, it is home to hundreds of different nations, over 200 language groups and an immense variety of cultural, geographic and ecological regions. To the newcomers these people were simply perceived as “the natives”, and despite the immense cultural diversity across vastly different environmental zones, the disparate groups became labelled with the umbrella term: “the Aborigines”.

There is a similar tendency today to homogenise the deep history of the first Australians. The dynamic natural and cultural history of Australia is too often obscured by tropes of timelessness. Tourism campaigns continue to tell us that this is the land of the “never never”, the home of “ancient traditions” and “one of the world’s oldest living groups”.

Such slogans imply a lack of change and hide the remarkable variety of human experiences on this continent over tens of thousands of years. While there is great continuity in the cultural history of Indigenous peoples, theirs is also a story of rupture and resilience. 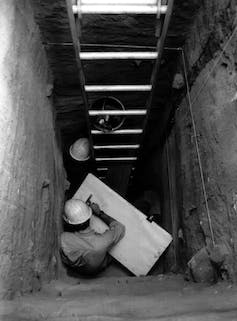 The discovery of old dates at Madjedbebe does not make the history of the site any more or less significant. It simply reminds us that science, like history, is an ongoing inquiry. All it takes is a new piece of evidence to turn on its head what we thought we knew. Science is a journey and knowledge is ever evolving.

The epic story of Australia will continue to shift with the discovery of new sites and new techniques, and by engaging and collaborating with different worldviews. It is a history that can only be told by working across cultures and across disciplines; by bridging the divide between the sciences and the humanities and translating numbers and datasets into narratives that convey the incredible depth and variety of human experience on this continent.

The authors of this article will continue this conversation at a public event in Wollongong on Friday 24 November 2017 at the annual meeting of the Australasian Association for the History, Philosophy and Social Studies of Science. There will be two other sets of speakers, exploring issues surrounding precision medicine and artificial intelligence. Register here.