When you think of devastating deforestation and extinction you usually think of the Amazon, Borneo and the Congo. But eastern Australia ranks alongside these in the top 10 of the world’s major deforestation fronts – the only one in a developed nation. Most of the clearing is happening in Queensland, and it is accelerating.

Only last year a group of leading ecologists voiced their alarm at new data which showed the clearing of 296,000 hectares of forest in 2013-14. This was three times higher than in 2008-09, kicking Australia up the list as one of the world’s forest-clearing pariahs. At the 2016 Society for Conservation Biology Conference, a Scientists’ Declaration was signed by hundreds of scientists, expressing concern at these clearing rates.

But the latest snapshot, Queensland’s Department of Science report on land cover change published last month, showed a staggering 395,000ha of clearing for 2015-16: a 133% increase on 2014-15. As far as we can tell this rate of increased clearing is unmatched anywhere else on the globe.

The current government, elected in 2015, has tried and failed to reinstate the protections. In response, “panic clearing” caused clearing rates to shoot up, in anticipation that the state election will deliver a government that will reintroduce the much-needed protection of forests.

The Queensland Parliament is now in caretaker mode ahead of the November 25 election. The Queensland Labor Party has pledged to reinstate laws to prevent wholesale clearing, while the LNP opposition has vowed to retain current clearing rates. 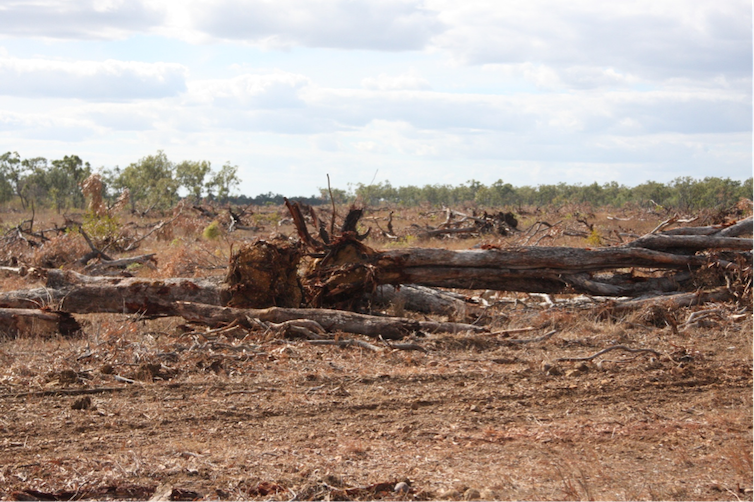 Whichever way you look at it, there is not a lot of sense in continued clearing. Australia already has some of the highest extinction rates on the planet for plants and animals. With 80% of Queensland’s threatened species living in forest and woodland, more clearing will certainly increase that rate.

Clearing also kills tens of millions of animals across Australia each year, a major animal welfare concern that rarely receives attention. This jeopardises both wildlife and the A$140 million invested in threatened species recovery.

This rate of clearing neutralises our major environment programs. Just one year of clearing has removed more trees than the bulk of 20 million trees painstakingly planted, at a cost of A$50 million. Australia’s major environment programs simply can’t keep up, and since 2013 are restoring only one-tenth of the extent of land bulldozed just last year.

Restoration costs to improve the quality of waters running onto the Great Barrier Reef are estimated at around A$5 billion to A$10 billion over 10 years. Nearly 40% of the land cleared in Queensland is in reef catchments, which will reverse any water quality gains as sediment pours onto the reef.

Since 2014, the federal government has invested A$2.55 billion on reducing emissions in the Carbon Farming Initiative through the Emissions Reduction Fund. Currently 189 million tonnes of abatement has been delivered by the Emissions Reduction Fund. This – the central plank of the Australian government’s climate response – will be all but nullified by the end of 2018 with the current clearing rates, and will certainly be wiped out by 2020, when Australia is expected to meet its climate target of 5% below 2000 emissions.

Ironically, this target will be achieved with the help of carried-over results from the first commitment period of the Kyoto Protocol, which Australia was only able to meet because land clearing had decreased between 1990 and 1997.

Most of the clearing in Queensland since 1999 has been for pasture. Most good cropping land was cleared decades ago. Removing trees in more marginal lands can increase the carrying capacity for a short time with an immediate, and usually short-lived, financial reward. These rewards come at the expense of long-term sustainability, which future landholders and government will bear.

Large areas of the cleared lands have been subject to substantial erosion and nutrient loss from the newly cleared lands, and land degradation over time, and some areas have suffered massive woody weed incursions.

This is playing out today across the north where pastoralism is a marginal activity at best, with declining terms of trade of about 2% per year, with no net productivity growth, high average debts and low returns, and many enterprises facing insolvency. Clearing vegetation won’t change that.

A recent preliminary valuation of ecosystem services, on the other hand, estimated that uncleared lands are worth A$3,300-$6,100 per hectare per year to the Australian community, compared with productivity of grazing lands of A$18 per hectare.

With a clear divide between the policies Labor and the LNP are taking to the election, now is a good time to give land clearing’s social, economic and environmental impact the scrutiny it deserves.