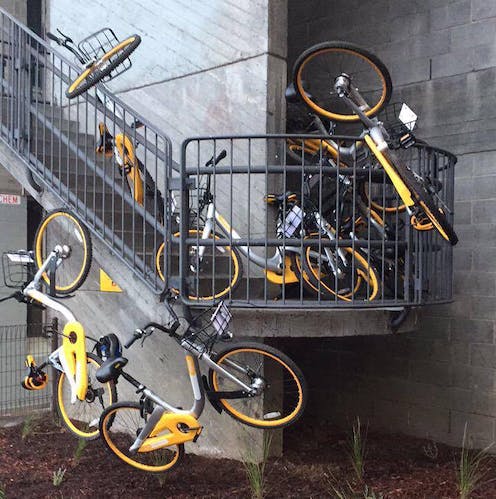 Many cities are keen on dockless share-bike schemes such as oBikes or Reddy Go, and for good reason. They promote greater physical movement, help solve transport problems in congested cities, and can be fun.

But there’s a downside. Share-bikes can litter our cities and be found in rivers, up trees, in gutters, and strewn around public places. One of the reasons for this is culture.

There are three factors influencing the use of share-bikes:

Further reading: To end share-bike dumping, focus on how to change people’s behaviour

To understand Australian culture and see why it’s problematic for share-bikes, let’s compare it to one of our neighbours – Singapore.

While there has been poor behaviour with share-bikes in Singapore, there are three key cultural reasons why a business model that could be successful in Singapore is much less likely to be so in Australia: power distance, individualism, and uncertainty avoidance.

Power distance could be thought of as respect for authority, or as the likelihood to be influenced by an injunctive norm.

Australians and Singaporeans both know share-bikes should be returned to a designated parking space, but Singaporeans are more likely to be open to messages telling them to park appropriately than Australians.

Put together with injunctive norms in Australia having been quite faint and you can see why Australians are not as likely to do the right thing at the end of a trip.

The second major difference is individualism. Australians are reported to be much more individual than Singaporeans; Singapore is a more collectivist society than Australia. If you add in the other differences in indulgence and long-term orientation, you can see why Australians are more likely to do what feels good for the individual in the short term rather than what’s best for society in the long term.

So, at the end of a share-bike trip, an Australian is more likely to leave the bike in a non-designated area if it suits them than a Singaporean is.

Uncertainty avoidance, or worrying about the unknown, is the third major way the two countries differ.

This openness helps the adoption of new business models such as share-bikes. And if the right social norms around behaviour can be engineered, Singaporeans are much more likely to behave in pro-social ways, such as leaving the share-bike in the right place.

What Australia can do about share-bike littering

Changing national culture to make Australians better users of share-bikes would be extremely difficult, if not downright impossible in the short term. It’s questionable whether that would be a good thing to do, anyway.

So, if we can’t or shouldn’t change our culture, then we should try to modify the share-bike business model to better fit Australian ways.

It’s highly unlikely that the dramatic examples of share-bike littering we see, such as bikes in rivers or up trees, are caused by share-bike users themselves, as they would pay a penalty under most business models. What’s much more likely is that share-bikes are left in awkward or undesignated places for the “free spirits” in society to take advantage of.

By their carelessness, known users are contributing to the problem. As such they are a priority target for behavioural change.

Loss-aversion theory says we are much more likely to be motivated by the prospect of a loss than a gain. And the sense of being observed – for example, a visible police presence – can change our behaviour.

So, if it was made clear to a user that they were being watched when they were about to return a bike to a non-designated place – and that there would be immediate and certain consequences – they would be much more likely to do the right thing.

While most share-bike business models have deposits, incentives and penalties, they are too vague and uncertain when it matters.

The sense of being under scrutiny needs to be front of mind at the time of the behaviour. For some share-bike operators, such a solution is either in development or close at hand. And much more precise geolocation capability could give users a sense of being watched.

If the share-bike business model is tweaked, Australians could embrace a clever and fun form of transportation.