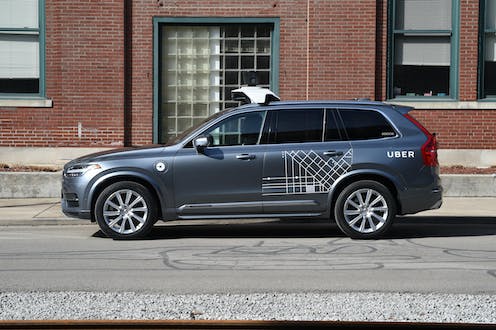 Consider this thought experiment: a woman pushes a bicycle across a busy road at 10 pm. She is struck by a car and dies. Would this event usually generate headlines or cause all driving to be halted? No, because there were more than 5,984 pedestrians killed by cars in 2017 and such an accident would be sad but not unusual.

Now, modify the facts so that the car is self-driving, and is owned by Uber. Today’s tragic accident in Tempe, Arizona, killing 49-year-old Elaine Herzberg, has resulted in headlines and the suspension of Uber’s self-driving cars in Arizona, Washington, and Pennsylvania.

Arizona is a leader in autonomous vehicle (AV) testing, and the state has taken a light-touch approach to regulation of self-driving vehicles. This incident points to the need for further scrutiny of those laws – and Australia should take note.

Read more: Who’s to blame when driverless cars have an accident?

Reports from the recent accident show that the Uber car was traveling at 40mph (about 64kph) in full autonomous mode and that there was a “safety driver”.

Unsurprisingly, Uber is under attack and there are calls for strong action, including criminal prosecution. But it would be a mistake to overreact, and action against Uber must wait until we have facts. The National Highway Traffic Safety Administration has dispatched a team to investigate the accident.

In March, Arizona Governor Doug Ducey issued an executive order recognising that the state had become a hub for driverless car research and development, with more than 600 vehicles undergoing testing on public roads.

Prior to testing AVs without a human present in Arizona, operators are required to submit a statement to the Arizona Department of Transport certifying:

The second requirement is inapplicable if a human is present. Both the “automated driving system” (robot) and the person (or company) who submitted the statement are subject to all applicable laws, and regarded as licensed to operate the vehicle. The state can issue citations and penalties for violations.

Perhaps the most important part of the governor’s executive order is a to-do item to create a “law enforcement interaction protocol”, which would have provided the meat of the legal regime in cases such as today’s accident.

Regulation in other US states

The legislation in Georgia imposes a “super-insurance” requirement until December 31, 2019. An AV has to be covered by “liability coverage equivalent to 250%” of what is normally required.

Meanwhile, Nevada has adopted perhaps the most detailed law on self-driving cars. In essence, their laws describe the owner of a vehicle as the driver of the vehicle, and therefore legally responsible for the automated driving system.

It’s clear there is a lot of variation in legislation relating to AVs across the US – 33 states introduced laws in 2017 alone. All of this reflects the legal complexities of advancing driverless car technology without sacrificing safety. Critics argue that there is a “race for the bottom”, and states with strong tech-industry lobbies are at the forefront of light-touch regulation.

In Australia, the governments of New South Wales, Victoria, and South Australia have passed laws on the subject. NSW adopted legislation in 2017 – the Transport Legislation Amendment (Automated Vehicle Trials and Innovation) Act 2017.

The NSW legislation’s purpose is to:

The minister, Melinda Pavey, may approve applications for testing AV, for specified periods, and subject to any conditions.

Crucially, the law requires a public liability insurance policy of at least A$20 million to cover damage caused by, or arising from, the use of the trial vehicle.

Unlike some recent US laws, NSW requires human presence in the vehicle. This “vehicle supervisor” must be approved, and have a valid licence. The human must be “in a position to take control of the trial vehicle at any time or to stop [it] in an emergency or if required” by law enforcement. Approvals for trials are conditioned on the operator reporting accident and collision data. Importantly, the human is legally deemed to be the “driver” of the vehicle.

Read more: Driverless cars might follow the rules of the road, but what about the language of driving?

Clearly, the NSW law is a tentative first step – cautious, not fully embracing self-driving technology, and more human-centric. That may not be a bad thing. As the Uber accident today shows, much is unknown in the realm of automated vehicles.

Elaine Herzberg’s death will provide the impetus for clearer liability rules for self-driving cars. In the absence of such clarity, the aggressive tactics of operators such as Uber have the potential to kill AV development. Australia is wise to adopt a wait-and-watch approach and maintain its human-first orientation.