Last week, the Democratic Party in the United States brought an unprecedented lawsuit against a foreign country, Russia, and persons connected to the Kremlin. Predictably, this has received condemnation from Republicans and the Trump campaign. The Russian government – the primary target of the case – has not responded publicly.

Democratic party faithful have been supportive, invoking memories of their successful legal action against the Nixon campaign. That action yielded a settlement worth US$750,000 in 1974.

The case will be heard in the US District Court for the Southern District of NY. The legal action is brought under provisions of the Computer Fraud and Abuse Act, Racketeer Influenced and Corrupt Organizations Act (RICO), the Stored Communications Act, and the Digital Millennium Copyright Act.

Read more: How to manage Russia becomes one of the most pressing questions in US, and world, affairs

Essentially, Russia is alleged to have hacked into the Democratic National Committee’s (DNC) computers. The government and related entities are accused of accessing the party’s telecommunications and obtaining tens of thousands of documents and emails.

This “stolen information” was allegedly used to advance Russia’s own interests, destabilise the US political environment and denigrate Hillary Clinton. Russia is also accused of supporting Trump’s campaign because his “policies would benefit the Kremlin”.

The Trump campaign is also alleged to have engaged in a conspiracy with the Russians to ensure the election of Trump.

Shortly after Trump announced his candidacy for president in June 2015, European intelligence agencies intercepted communications between his campaign and Russian operatives.

By July 27 2015, Russia had conducted cyber attacks on Democratic National Convention (DNC) systems, which contained “some of the DNC’s most sensitive strategic and operational data”.

In October of that same year, Trump signed a letter of intent to develop real estate in Russia financed by a Russian bank (Vneshtorgbank) that was under under US Treasury sanctions.

This deal was brokered by real estate developer Felix Sater, who claimed in a November 3 email:

I will get Putin on this program and we will get Donald elected.

The DNC complaint alleges that in 2016, Kremlin operatives:

notified the Trump campaign that Russia intended to interfere and expressed their government’s backing of Trump via meetings, emails, and other communications.

This included a willingness on Russia’s part “to use stolen emails and other information to damage” Hillary Clinton.

The Russians hacked into the DNC’s servers for the second time in April 2016. GRU agents hacked the DNC’s research, IT, and other departments, and document repositories. 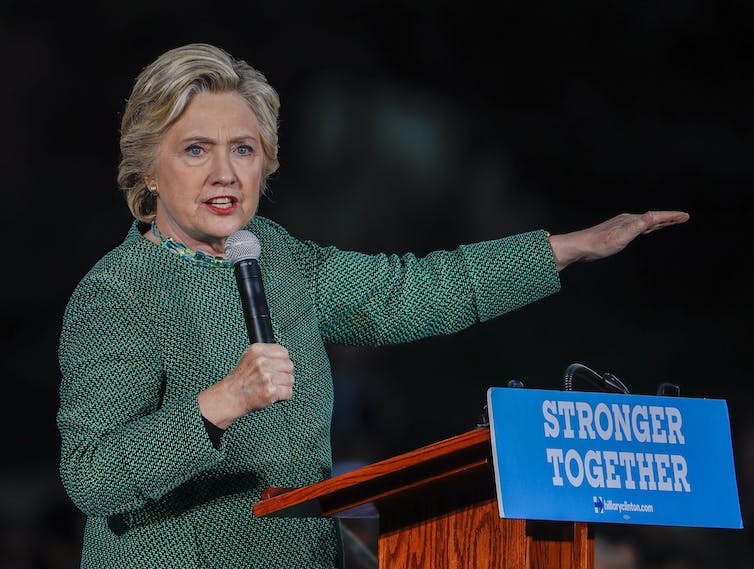 The DNC complaint alleges that Kremlin operatives advised the Trump campaign Russia was willing ‘to use stolen emails and other information to damage’ Hillary Clinton. Erik S. Lesser/AAP

On April 26, then foreign policy adviser to Trump’s campaign, George Papadopoulos, met with a Russian agent who told him that the Russians had dirt on Clinton in “thousands of emails”. Papadopoulos only reported this to his employers and not law enforcement.

He also confided in an Australian diplomat, who reported this to US officials, prompting an FBI inquiry into connections between Russia and the Trump campaign.

But for this crucial error by Papadopoulos, Trump may not have been in his current predicament.

Read more: US approach to security is deeply troubling – and it's not just about Trump

Russia continued its presence on DNC servers. By May, it had hacked data including donor information, opposition research and plans for political activities, as well as thousands of confidential emails.

Donald Trump Jr. was contacted on June 3 with an offer of damaging information about Clinton as “part of Russia and its government’s support for Mr. Trump”. Soon after, Trump Jr., Manafort, and Kushner had the now infamous meeting with Russians in Trump Tower.

On July 22, prior to the DNC Convention, Wikileaks publicly disseminated DNC emails and other documents.

What the DNC claims

After learning of the hacking, the DNC commissioned a forensic analysis by IT firm Crowdstrike, which confirmed hacking by two Russian state-sponsored entities.

The entities were codenamed “Cozy Bear” and “Fancy Bear”. The latter was an agent of GRU.

The analysis found that user credentials were used to access information that was then posted online by the GRU operative. Hackers also accessed phone calls and voicemail.

The DNC claims the motivations for the conspiracy were twofold. First, Putin’s intense dislike of Clinton, stemming from his belief that she was behind massive protests in Russia in December 2011. Putin is quoted in the complaint, accusing Clinton of setting “the tone for some of our actors in the country”.

Second, Trump’s admiration of Putin made him valuable to Russia.

The DNC claims these two motivations provided the “common purpose” for the conspiracy. They argue Assange was part of the conspiracy because of his long history of conflict with Clinton.

This case provides the most detailed view of Russia’s tactics in election manipulation – providing a roadmap for other countries where it might try similar methods.

Australia may be vulnerable because of tensions with Russia and North Korea in recent times. With a federal election on the horizon, it would be sensible for Australian political parties to upgrade their cyber security and protect IT equipment in close consultation with intelligence agencies.

Parties should be wary of approaches by unknown entities with promises of assistance and carefully vet any foreign commercial contacts or deals. They should also assume that sensitive information is likely to be leaked and dirty tricks against the opposition could backfire. Individual politicians should be careful not to become pawns of foreign governments.