Stinging trees grow in rainforests throughout Queensland and northern NSW. The most commonly known (and most painful) species is Dendrocnide moroides (Family Urticaceae), first named “gympie bush” by gold miners near the town of Gympie in the 1860s. 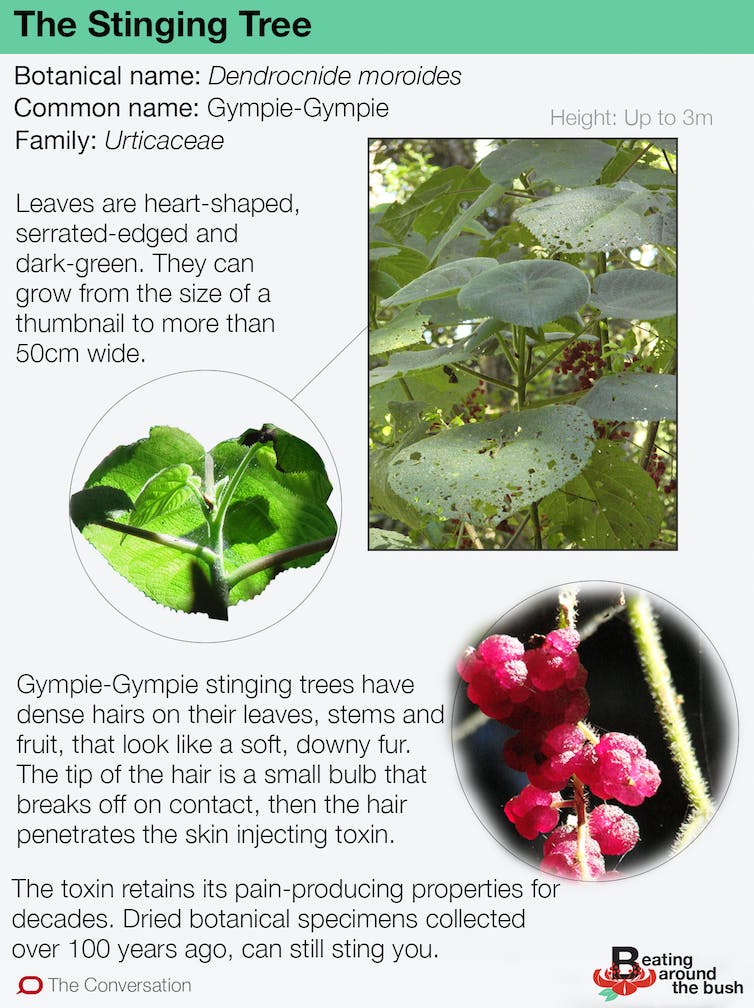 My first sting was from a different species Dendrocnide photinophylla (the shiny-leaf stinging tree). It was like being stung by 30 wasps at once but not as painful as being stung by D. moroides, which I once described as the worst kind of pain you can imagine – like being burnt with hot acid and electrocuted at the same time. An excerpt from a French documentary ‘Plant Secrets’ by director François-Xavier Vives.I agreed to study stinging trees even after being badly stung. The puzzle was – what was eating the stinging tree? Stinging trees often have huge holes but no-one knew what was eating them. What could possibly eat the leaves that were so painful to touch? (Read to the end to discover the answer). 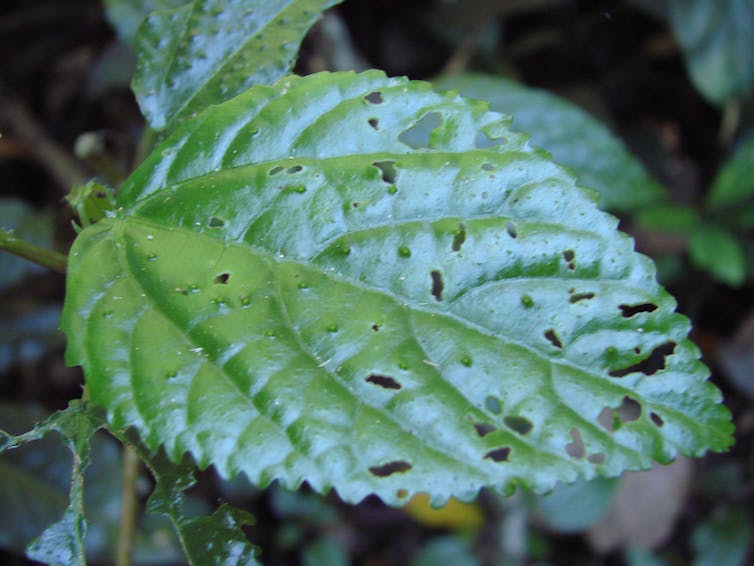 My first sting was from a different species Dendrocnide photinophylla (the shiny-leaf stinging tree) Marina Hurley, Author provided Read more: Grass trees aren't a grass (and they're not trees) Stinging trees grow in light-filled gaps in the rainforest understorey and come in many different shapes, sizes and species (seven in Australia). 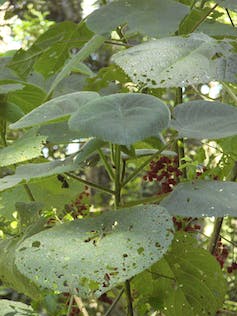 Dendrocnide moroides Marina Hurley, Author provided I studied two species for my PhD, Dendrocnide moroides and Dendrocnide cordifolia which is often mistaken for Dendrocnide moroides. Both species are shrubs that grow to three metres with heart-shaped, serrated-edged, dark-green leaves that can grow from the size of a thumbnail to over 50 cm wide. The sting is caused by stinging hairs that contain toxin and densely cover the leaves, stems and fruit. The thick covering of the hairs makes the leaves look as though they are covered with soft, downy, fur and may give the impression they are inviting to touch. The fruit of D. moroides is similar to a bright red-dark purple raspberry with long stems, while the fruit of D. cordifolia is always green with short stems that give the fruit a clumped appearance. 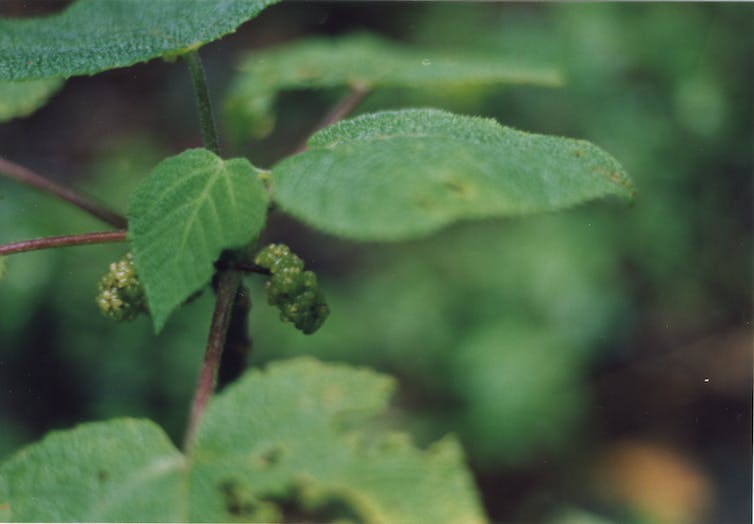 The fruit and leaves of Dendrocnide cordifolia. © Marina Hurley What it’s like to be stung Even the slightest touch of a D. moroides leaf can cause excruciating pain. An intense stinging, burning pain is felt immediately, then intensifies, reaching a peak after 20 – 30 minutes. The hairs can remain in the skin for up to six months, with stings recurring if the skin is pressed hard or washed with hot or cold water. Not only do you feel pain from where you are stung, if it is a really bad sting, within about 20 minutes your lymph nodes under your arms swell and throb painfully and feel like they are being slammed between two blocks of wood. The intense throbbing pain from both the sting and from your lymph nodes can last anywhere from 1-4 hours, depending upon what species you touched, the amount of skin that was stung, and how hard you came into contact with the plant. How it works The stinging hair structure is complex and consists of a tip, shaft and bulb composed of silica, calcium carbonate and calcium phosphate. The tip of the hair is a small bulb that breaks off on contact, then the hair penetrates the skin injecting toxin. The structure and function of Dendrocnide stinging hairs is similar across five plant families and is described as similar to a hypodermic needle. The composition of the toxin is also complex and still not well understood, including exactly what components actually cause the stinging sensation. The toxin is stable and heat resistant and retains its pain-producing properties for decades. Dried botanical specimens collected over 100 years ago, can still sting you. 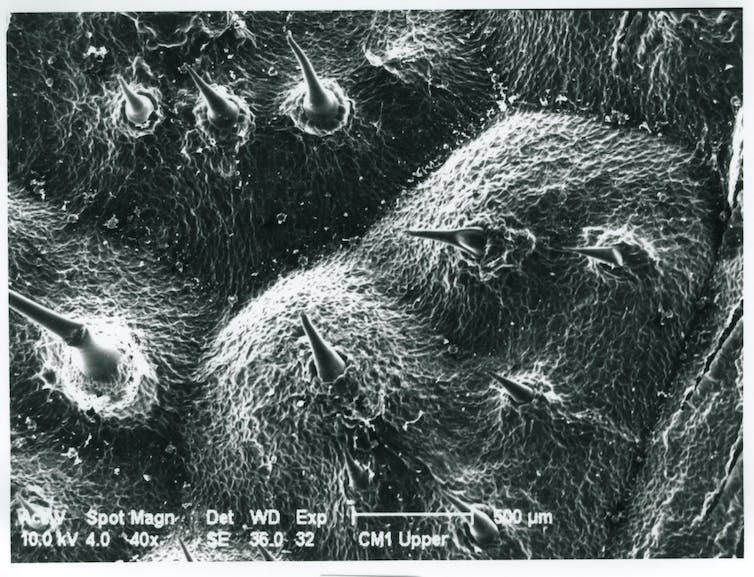 An electron micrograph of stinging hairs. © Marina Hurley Read more: Welcome to Beating Around the Bush, wherein we yell about plants Sting stories My worst sting was from a dead, dried-up leaf on the forest floor. I dropped my glove and then drove my finger through the leaf when I went to pick it up. As I was alone at the time, I had to drive to the hospital with one hand. During my research in the late 80s-early 90s, I heard dozens of stories about people getting badly stung including a letter from an ex-serviceman, Cyril Bromley, who said he was stung after falling into a stinging tree while crossing a creek near the Barron River (North Queensland) in 1941. He said the pain was so bad they had to tie him to his hospital bed for three weeks. He also recounted how an officer had shot himself because he could not stand the pain. The less well-known and very disturbing thing about stinging trees is they cause intense sneezing, nose bleeds, and possibly major respiratory damage, if you stay close to them for more than about 20 minutes without protection. The reaction starts with your nose tingling, then dripping continuously. After a short period, you start to sneeze – not just mild sneezing but intense, harsh and continuous bouts of sneezing. 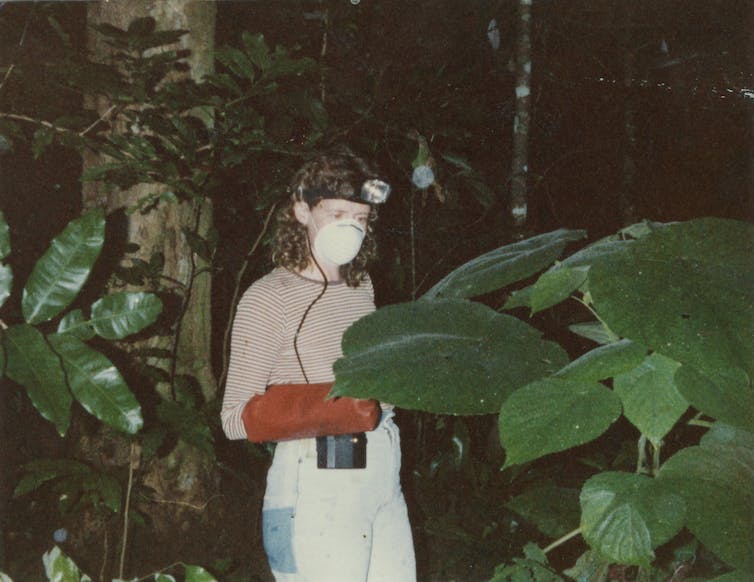 Marina Hurley wore a particle face mask and welding gloves when working with stinging trees. © Marina Hurley This happened to me and my field assistants when in close proximity to the plant, either in the rainforest or in the laboratory. Wearing particle face masks helps but they need to be regularly replaced. I believe that this reaction is caused by breathing in the hairs that become air-borne but I have never been able to substantiate this. Researcher W.V. MacFarlane described his reaction in detail when working with hairs and leaves of D. moroides: Mucous membranes are affected by dust or spray from the leaves… Initially they produced sneezing, but within three hours there was diffuse nasopharyngeal pain, and after 26 hours a sensation of an acute sore throat… aching sensations in the sinuses occurred… and a watery nasal discharge that persists for two days. The nasal mucous membranes then begin to slough together with blood, pus and inspissated (thickened) mucus… and discharge of sloughing tissue for 10 days. 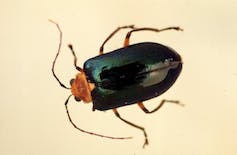 Dozens of these nocturnal beetles (Prasyptera mastersi) were found eating the leaves. © Marina Hurley The mystery solved I found out what was eating them: a nocturnal leaf-eating chrysomelid beetle and many other leaf-chewing insects and sap-suckers. Also, surprisingly, both species of stinging tree were voraciously eaten by the red-legged pademelons that occasionally stripped entire plants of their leaves overnight. 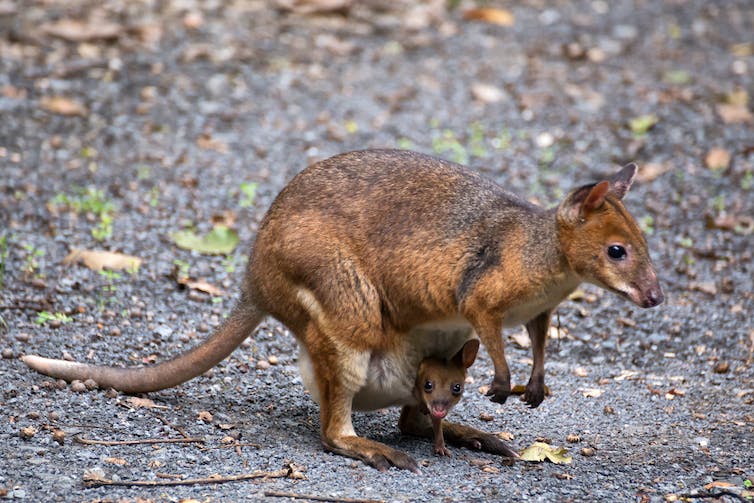 A red-legged pademelon. These tough guys eat stinging leaves. Shutterstock Meanwhile, if you are out and about in the rainforest, stay on the designated paths, and wear closed shoes and long pants.