China policy will not be a vote-shifting issue in the 2019 federal election. As usual, the economy and tax in particular will dominate this election.

But from a foreign policy standpoint there is no more important issue than achieving a reasonable balance between the United States, Australia’s security guardian, and China, its linchpin economic partner.

Getting the balance right and thus avoid being wedged between its security and economic interests represents what is arguably the most significant foreign policy challenge in Australian diplomatic history since Federation in 1901.

Mostly a unity ticket – but with some key differences

In 1972, the Whitlam Labor government ditched an anomalous attachment to Taiwan as China’s legitimate representative. Since then, China policy has, for the most part, been bipartisan.

Little separates Labor and the Coalition in a relationship that increasingly has been driven by economic ties. But there are nuanced differences.

Senior Coalition and Labor spokespeople have recently delivered addresses in Singapore that provide a useful insight into their thinking.

Both Pyne and Wong cautioned against allowing tensions between the US and China to divert Australia from pursuing its own interests, even if those interests do not accord with those of its security guarantor. Pyne said:

Unquestionably, rivalry between the US and China will be a feature of our international outlook in the foreseeable future. However, it is critical that US-China relations do not come to be defined in wholly adversarial terms.

In Wong’s case, she says simply that it remains “in the interests of all South East Asian nations that the US remains strategically engaged in the region”.

Where the two sides differ by degree lies in Wong’s assessment of risks to a “rules-based” international order posed by competition between an established and rising power.

She is gloomier than Pyne about the international outlook. She told her Singapore audience:

Pyne was more sanguine. He said:

Cold War commentary fails to see a fundamental but defining difference, namely the world’s economies are far more closely integrated and mutually dependent than they were when the West contested the Soviet bloc.

How would a Labor government change the relationship?

Where this is leading is that a Labor government would probably make a more conspicuous effort to bolster regional partnerships with the ASEAN bloc and India as a hedge against tensions between the US and China.

Labor might also seek to give itself more flexibility in positioning Australia between its strategic ally, the US, and its dominant economic partner, China. This fine-tuning would need to be carried out subtly to avoid upsetting cornerstone security arrangements that have served the country well. 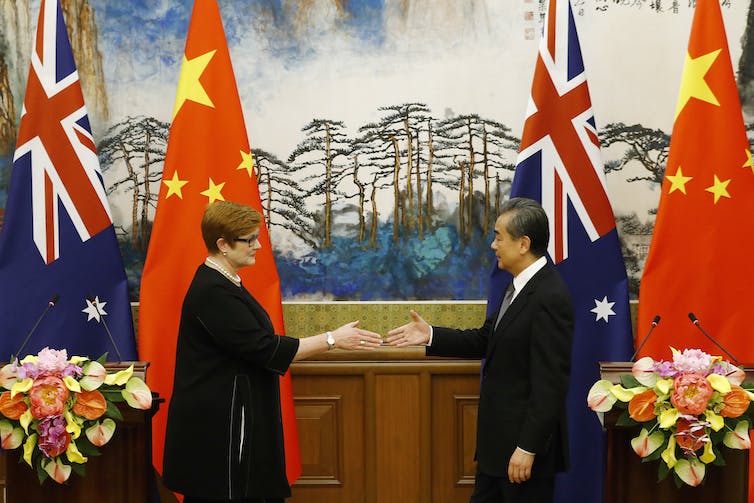 Where both sides of Australian politics converge is on the need to engage China, but not at the expense of disregarding Beijing’s flagrant attempts to assert its sovereignty in disputed waters of the South China Sea. Pyne put it like this:

There is no gain in stifling China’s growth and prosperity … We are not interested in containing China, but we are interested in engaging and encouraging China to exercise its power in ways that increase regional trust and confidence.

The building and militarisation of artificial features in the South China Sea, for instance, has not increased regional confidence in China’s strategic intentions.

Labor’s position on China’s overreach in the South China Sea mirrors that of the Coalition. Wong said:

Should the Australian Labor Party form government, we will certainly be advocating resolution of territorial claims and the exploitation of fishing stocks and seabed resources through negotiations between claimants rather than through unilateral action such as the militarisation of artificial islands.

In his Fullerton lecture, Pyne raised the possibility of Australia joining “multilateral activities in the South China Sea to demonstrate they are international waters”.

In his reference to so-called FONOPs (freedom of navigating exercises), he stopped short of indicating whether Australia planned to join allies in sailing within 12 nautical miles of China’s militarised features in South China Sea waters. The Coalition has not ruled out this possibility.

What is unarguable is that, after a long period of US strategic dominance, Australia’s security environment is shifting dramatically. Neither major party can escape this reality.

Pyne made some telling points that reflect the extraordinary complexity and dimensions of a region in flux – one that fleetingly, we should remind ourselves, anticipated an American century.

That prospect disappeared in the blink of an eye as China’s spectacular economic rise, linked with an expansion of its military capabilities, shifted the regional power balance.

Pyne’s scorecard brings home the scope of the challenge facing the next government, Coalition or Labor, in getting middle-power settings right. Or, put another way, to avoid being crushed by bigger players.

The Indo-Pacific is home to eight of the ten most populous nations on earth. Half of the world’s population calls it home.

In the latest Stockholm International Peace and Research Institute (SIPRI) survey of global military spending, Australia ranks 13th. This is ahead of Canada and behind Italy. Five Indo-Pacific nations spend more on defence – the US, China, India, Japan and South Korea.

Where the Pyne and Wong speeches overlap is in their warnings of the risks of isolationism. This can be read as a rebuttal of Donald Trump’s “America First” policies. Pyne said:

We fall short of our economic potential when parties choose to withdraw behind walls and withdraw from mechanisms designed to make us stronger.

Australia envisages a region that is more closely integrated and where we all collectively reject isolationism. We must work together not apart.

Labor would endorse those sentiments. Wong makes it clear that, for the time being, she would regard the prospect of the US reverting to a more collaborative posture as remote.

No matter who forms the next government, Australian policymakers are dealing with an end of certainty in a region remaking itself. They will need to be flexible – and resourceful.