With several hundred cases diagnosed each year, Australia has one of the highest rates of Q fever worldwide.

Q fever is a bacterial infection which spreads from animals; mainly cattle, sheep and goats. It can present in different ways, but often causes severe flu-like symptoms.

Importantly, the bacteria that cause Q fever favour dry, dusty conditions, and inhalation of contaminated dust is a common route of infection.

There are now fears the ongoing droughts in Queensland and New South Wales may be increasing risk of the disease spreading.

But there are measures those at risk can take to protect themselves, including vaccination.

Read more: Q fever: a former soldier is suing the government over it, but what is this mysterious disease?

What is Q fever and who is at risk?

Q fever is an infectious illness caused by the bacterium Coxiella burnetii, one of the most infectious organisms around.

Q fever is zoonotic, meaning it can transmit to people from infected animals. It’s usually acquired through either direct animal contact or contact with contaminated areas where animals have been.

Goats, sheep and cattle are the most commonly reported Q fever hosts, although a range of other animals may be carriers.

Because of this association with livestock, farmers, abattoir workers, shearers, and veterinarians are thought to be at the highest risk of Q fever.

People who also may be at risk include family members of livestock workers, people living or working near livestock transport routes, tannery workers, animal hunters, and even processors in cosmetics factories that use animal products.

Q fever can be difficult to diagnose (it has sometimes been called “the quiet curse”). Infected people usually develop flu-like fevers, severe headaches and muscle or joint pain. These symptoms typically appear around two to three weeks after infection, and can last up to six weeks.

A small proportion of people will develop persistent infections that begin showing up later (up to six years post-infection). These can include local infections in the heart or blood vessels, which may require lifelong treatment.

Are Q fever rates on the rise?

A national Q fever management program was designed in 2001 to combat this burden. This program provided subsidised vaccination to at-risk people including abattoir workers, beef cattle farmers and families of those working on farms. 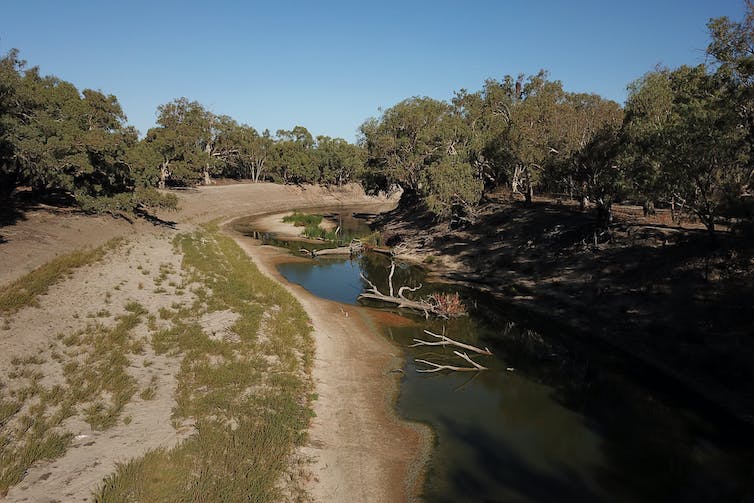 Every year, the highest numbers of people diagnosed are from Queensland and NSW.

And the true number of affected people is likely to be under-reported. Many infected people do not experience severe symptoms, and those who do may not seek health care or may be misdiagnosed.

The reason people are more susceptible to Q fever in droughts lies in the bacteria’s capacity to survive in the environment. Coxiella burnetii spores are very resilient and able to survive in soil or dust for many years. This also helps the bacteria spread: it can attach to dust and travel 10km or more on winds.

The ongoing drought could allow Q fever to spread and reach people who were previously not exposed.

One study suggested drought conditions were probably the main reason for the increase in Q fever notifications in 2002 (there were 792 cases that year). This was the fourth driest year on record in Australia since 1900.

We still need more evidence to conclusively link the two, but we think it’s likely that drought in Queensland and NSW has contributed to the increased prevalence of Q fever in recent years.

How can people protect themselves?

However, people who have already been exposed to the bacteria are discouraged from having the vaccination, as they can develop a hypersensitive reaction to the vaccine. People aged under 15 years are also advised against the vaccine.

Because the vaccine cannot be administered to everyone, people can take other steps to reduce risk. NSW Health recommends a series of precautions. 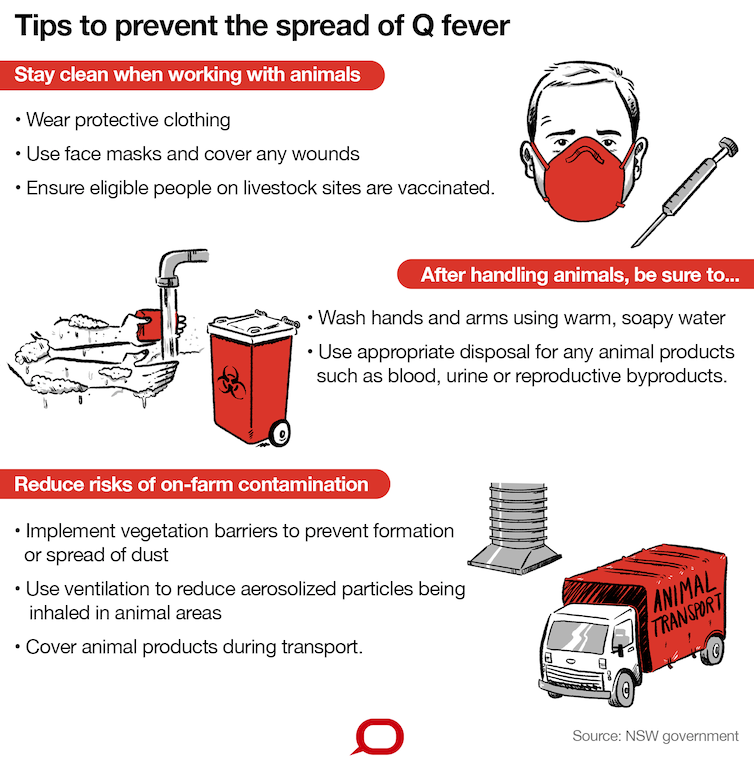 Author provided/The Conversation, CC BY-ND What else can be done? Vaccination for people in high-risk industries is effective to prevent Q fever infection, but must be administered well before people are actually at risk. Pre-testing requires both a skin test and blood test to ensure people who have already been exposed to the bacteria are not given the vaccine. This process takes one to two weeks before the vaccine can be administered, and it takes a further two weeks after vaccination to develop protection. This delay, along with the cost of vaccination, is sometimes seen as a barrier to its widespread use. Read more: Millions of Australian adults are unvaccinated and it's increasing disease risk for all of us Awareness of the vaccine may also be an issue. A recent study of Australians in metropolitan and regional centres found only 40% of people in groups for whom vaccination is recommended knew about the vaccine, and only 10% were vaccinated. We also need to better understand how transmission occurs in people who do not work with livestock (“non-traditional” exposure pathways) if we want to reduce Q fever rates.