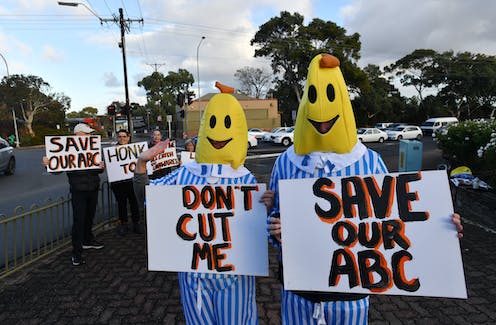 It can be hard for a political cause to get noticed in a jaded world awash with information, but conspiracy theories can go a long way.

This could help explain the motivations of the lobbying group Advance Australia (AA) in this election campaign. Advance Australia was founded late last year as a conservative antidote to the left-leaning GetUp! and has attracted prominent business leaders as financial backers.

Liberal luminaries like Eric Abetz have long been wary of GetUp!, viewing it as an arm of Labor and the Greens (despite the fact the Australian Electoral Commission has ruled the group is independent of any political party).

Following GetUp!‘s success in unseating Liberal Bass MP Andrew Nikolic in the 2016 election, these conservative factions are now annoyed by the group’s aggressive campaigning against Tony Abbott in Warringah in this campaign.

This is where the conspiracy theories come in.

According to a video released by Advance Australia in April, GetUp! is “imposing its secret agenda on Australia and seeking to control the Australian way of life”. It “flies under the radar” and is “hoodwinking well-meaning Australians into implementing their radical agenda”.

The video also warns that GetUp! is linked to “a foreign network of left-wing activist groups” known as OPEN, which is authoritarian (“reminiscent of the old-style Soviet Union”) but somehow also “globalist”.

This hissy-fit of hyperbole prevents Advance Australia from seeing what stares the group in the face. GetUp! is none of those things. Rather, the organisation gives ordinary people a way to get involved in political life at the grassroots level – a commonplace phenomenon in American politics that is only possible in Australia outside our more dominant party structures.

GetUp! has emerged as a target in this campaign because of its increasing influence as a mobiliser of this sort of grassroots political participation.

GetUp!’s mission is to “bring participation back into our democracy” through various online and offline activities such as protests, vigils, door-knocking campaigns and donation drives – a strategy modelled on the American grassroots political group MoveOn. Its signature campaign was its push for marriage equality in Australia, with this powerful video garnering more than 16 million views on YouTube.

GetUp! now boasts more than 1 million members and aims to make 1 million phone calls in target electorates during this campaign – often organised through hundreds of “calling parties” in homes across Australia – and to knock on countless doors in key marginal seats.

It is not formally aligned with Labor or the Greens, but it certainly leans left: on its website, it vows to kick out the “hard right MPs” who it says have:

However, the group’s awkward campaign tactics, which include a widely mocked anti-GetUp! superhero figure and reliance on wealthy backers instead of small donations, show it still has a long way to go in adopting a participatory model.

The origins of grassroots campaigning

The rise of GetUp! and other similar grassroots campaigns being run by independents – such as Zali Steggall’s “Voices For Warringah” campaign and the “Voices For Indi” campaigns of first Cathy McGowan and now Helen Haines – is linked in part with early American ideals of participatory democracy, anti-politics, and the power of the internet.

Beginning in the 1980s, American writers such as Steven Levy, Howard Rheingold, Bruce Sterling and a bevy of followers championed the internet as a way of helping empower those at the bottom against political elites. They linked the digital era to the sentimentalised American ideal of populist anti-politics and romanticised the digital-savvy outsiders who harnessed the power of grassroots democracy to ride into office and clean up Washington DC.

Read more: More than 'slacktivism': we dismiss the power of politics online at our peril

One of the first notable internet campaigns was Howard Dean’s presidential run in 2004, which adopted the digital innovations and political advice of MoveOn.

Barack Obama’s presidential campaign of 2008 then further adapted the Dean model by creating a movement hinting at direct democracy and melding an online and offline grassroots organisational strategy through MyBarackObama, the campaign’s social network. This included more than 200,000 events, such as barbecues and parties, for the volunteers who were door-knocking and telephone canvassing for votes and donations.

The ALP hoped for similar success by importing senior American personnel from the 2012 Obama campaign to help run grassroots strategy for its 2014 Victorian state election campaign. It also imported Blue State Digital, a strategy and technology firm that has been important to Democrats since 2005 and managed Obama’s digital campaign in 2008, to aid its less-successful 2013 federal campaign.

These efforts, however, were confined to party and union members, not the broader grassroots base now being reached by GetUp!.

Similarly in 2013, the Republican-aligned digital strategy firms IMGE and Engage were brought in to help the Liberal Party with digital fundraising and data-mining techniques. These innovations, though, also did not embrace participatory campaigning outside party members.

In this year’s campaign, independents like Steggall and Haines are also enthusiastically embracing community-based campaigning.

Both candidates, for instance, rely on NationBuilder, a Los Angeles-based software company, to create platforms for their online donations and communications efforts and offline activities for their volunteers. Since 2013, NationBuilder has also been the online platform of choice for ALP, Greens and the Australian Council of Trade Union campaigns.

Read more: Not so grassroots: how the snowflake model is transforming political campaigns

Like McGowan and Haines, Steggall campaigns as a cleanskin unsoiled by party politics, with a “non-partisan community group” aiming to “bridge the gap between people and politics”. This anti-politics mantra contrasts with Abbott, who is viewed by many as one of the people responsible for Australians’ widespread distrust and disillusionment with government.

This distrust is a problem for the major parties, but a boon to GetUp! and the independents, who are projected to do well in this election. If the next government cannot counter such feelings among voters, these influential outsiders will continue to flourish in the foreseeable future with the help of digital outreach and the flush of excitement in ordinary citizens who want change, whatever that means to them.

Maybe even Advance Australia will start to harness this grassroots power on the conservative side, minus the conspiracy theories.