Tehan said he commissioned the review due to concerns certain views were being shut down on campus. This followed protests at Sydney University during a talk by sex-therapist and commentator Bettina Arndt. The talk challenged notions of a rape culture on campus.

French’s report concluded there was no systemic free speech crisis in Australian universities. But he noted many universities’ policies use broad terms that create the potential to limit free speech on campus.

He therefore suggested universities voluntarily strengthen their protections for free speech by adopting general principles, which he set out in a model code. So, what does that code look like? And should universities be adopting it?

What is the model code?

French’s proposed model code has, at its core, the need to ensure both the freedom of lawful speech and academic freedom. French differentiates between the two, which he says are often conflated. He writes: 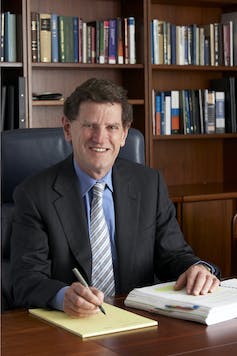 Former High Court chief justice Robert French put together a draft model code of conduct in his review of freedom of speech at Australian universities. Federal Court of Australia

The code also makes clear a university can restrict free speech and academic freedom if this is necessary to achieve the university’s core research and teaching mission, to comply with legal duties and to “foster the well-being of students and staff”.

This last element includes that universities have a duty to protect staff and students from discrimination. This acknowledges that a person’s freedom of speech stops when it starts to infringe on another’s rights.

The model code recognises that universities’ duties include preventing staff and students using lawful speech in a way that would be regarded as “likely to humiliate or intimidate” others. This provides quite a generous scope for universities to prevent discriminatory and vilifying speech, even if it would not meet the legal threshold for vilification under federal law or state law such as in NSW.

The code recognises that academic freedom can be limited by reasonable requirements about course content and pedagogy (although offensive or shocking material that is otherwise compliant is protected by academic freedom).

Finally, the model code turns to concerns that have dominated media headlines and motivated the inquiry – hosting controversial speakers.

In this respect, the code:

the advancement of theories or propositions which do not meet scholarly standards […] and would be […] “detrimental to the university’s character as an institution of higher learning”.

It could be said, then, that these protections reflect the existing state of affairs on Australian campuses. Although universities, their staff and students all stand to benefit from clarifying obscure policy language, the pressure for universities to take action may be more about politics than anything else.

Read more: We need to talk about the actual threats to academic freedom on Australian campuses

What are universities doing?

[…] sector-wide legislative or regulatory requirements would be aimed at solving a problem that has not been demonstrated to exist and any changes could conflict with fundamental principles of university autonomy.

The University of Melbourne has, in recent days, released a new policy on free speech, which is substantially similar to the model code. It begins from the presumption free speech, academic freedom and university autonomy are all “core values”. It limits free speech that “unreasonably disrupts activities or operations of the university […] or jeopardises the physical safety of individuals”.

But it arguably goes further in permitting limitations on speech that “undermines the capacity of individuals to participate fully in the University”.

This provision is particularly interesting. At first it appears similar to the model code’s duty of the university to foster student and staff well-being, but the code requires the university to prevent discriminatory harms.

By contrast, the University of Melbourne’s policy suggests an affirmative duty for members of the university community to support one another’s capacity for full engagement in university life. This is possibly a more positive understanding of the freedom than encapsulated by the model code.

Finally, and illustrating the complexity of these issues, Melbourne’s new policy links to other detailed university policies that regulate workplace behaviour, student conduct, university facilities, acceptable use of IT, and academic freedom.

Read more: There's no need for the 'Chicago principles' in Australian universities to protect freedom of speech

The University of Sydney has also announced plans to “thoughtfully” implement the principles of the model code. It remains to be seen how this will play out.

The university recently concluded its investigation into the protests against Arndt, disciplining one student while also reinforcing that protests are protected speech.

Focusing on policies is only part of the story. As French stated:

A culture powerfully predisposed to the exercise of freedom of speech and academic freedom is ultimately a more effective protection than the most tightly drawn rule. A culture not so predisposed will undermine the most emphatic statement of principles.

We could not agree more.