If we think of the bluestone in Melbourne, we may first think of the famous cobbled laneways intersecting the urban grid.

Initially, these laneways were used for the collection of night soil – human excrement collected at night from buckets or privies – and they are still useful routes for collecting rubbish and recycling bins. But laneways are increasingly being reclaimed as lively strips for cafes, bars, restaurants and galleries in the city, or re-made as gardens in the suburbs.

Laneways are an important part of Melbourne’s heritage infrastructure, protected by legislation and design guides. And they are often defended by enthusiasts whenever a local council threatens to remove the bluestones or pave them over with asphalt.

The other thing we might think of when it comes to bluestone in Melbourne are landmark buildings such as Pentridge Prison (still known affectionately as the “bluestone college”) and the Old Melbourne Gaol in Russell St.

Then there is the more elegant gothic style of St Patrick’s Cathedral, or the brutal modernism of the National Gallery of Victoria. Several blocks further down St Kilda Road are the grand Victoria Barracks, festooned with gorgeous crimson Boston Ivy in autumn. 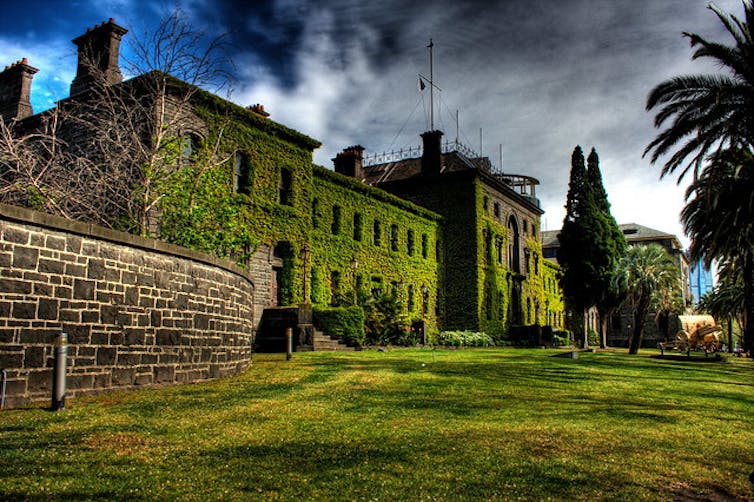 The Boston ivy covering the bluestone of the Victoria Barracks can stop you in your tracks. Adam Selwood/Flickr, CC BY

Deep bluestone foundations also underpin some of the city’s most famous sandstone buildings: the Victorian Parliament, the Treasury, the Town Hall and the Supreme Court.

These dark grey stones that line and frame its streets and buildings are an important feature of Melbourne’s urban identity. Here’s how it began. 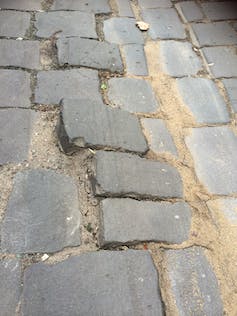 Cobbled bluestone in a Melbourne laneway. Author provided (No reuse)

The formations of bluestone are paradoxically both fast and slow, and begin with explosions of fire and rock.

In successive periods of volcanic activity to the north and south-west of Melbourne (some from 4.5 million years ago, some as recent as 10,000 years ago), rocks and boulders were thrown up as flaming projectiles or poured out of volcanoes as molten lava.

From these furious beginnings, basalt settles into the heavy dark stones we now associate with stability and endurance.

But the consistency of bluestone varies widely, depending on how it was formed. When it cools slowly, it’s hard and smooth, with barely a flaw, or at most a delicate thread of tiny bubbles. This is the highest grade stone, used for smooth surfaces such as hearthstones and front-facing walls.

Read more: Friday essay: war crimes and the many threats to cultural heritage

But if a flying boulder lands in water, it cools more rapidly, so pockets of gas produce bubbles, even sometimes a honey-comb effect.

The quality, colour and consistency of bluestone used in Melbourne also varies according to the quarries from which it’s sourced; or whether it comes from Australia or overseas.

Geological time is almost beyond our reckoning, though Indigenous culture and history helps us read these formations on a human scale. A stone axe-head, found deep beneath layers of volcanic ash at Tower Hill, suggests Indigenous people would have witnessed some of the volcanic activity on this site. 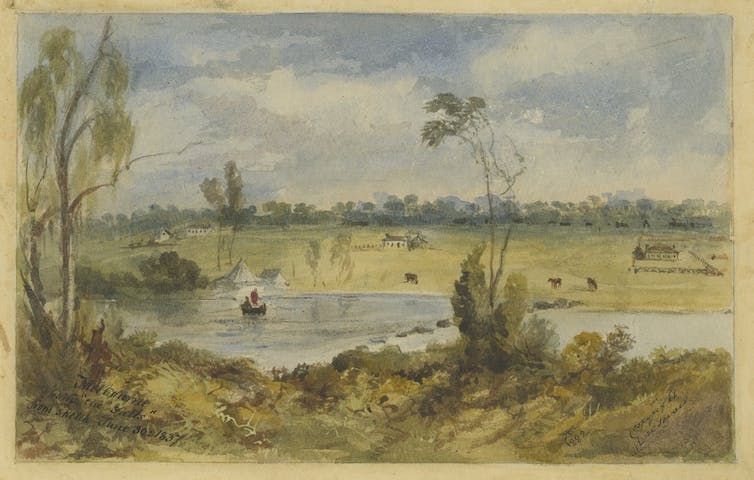 A sketch from 1837 showing The Falls, a stretch of bluestone crossing the Yarra that acted as a natural bridge. State Library of Victoria

Important traces of Indigenous knowledge and use of bluestone have also been discovered throughout Melbourne and elsewhere in Victoria.

For instance, bluestone was used for an eel trap system carbon-dated to 6,600 years old, developed near Lake Condah in the sacred Budj Bim landscape.

There’s also the natural basalt-bluestone ledge across the Yarra river — known as “The Falls” — which separated fresh and salt water. It was used as a meeting place for different tribal groups, but was removed in the 1880s.

And there are basalt stones arranged as astronomical markers at Wurdi Youang, near Lara.

Bluestone was the obvious choice for construction when Melbourne was a booming gold-rush city in the 1850s. It was cheap and plentiful, and there was convict labor to cut and haul its heavy weight.

But as early as the 1880s, bluestone had become unfashionable, perceived as too dark, somber and forbidding. 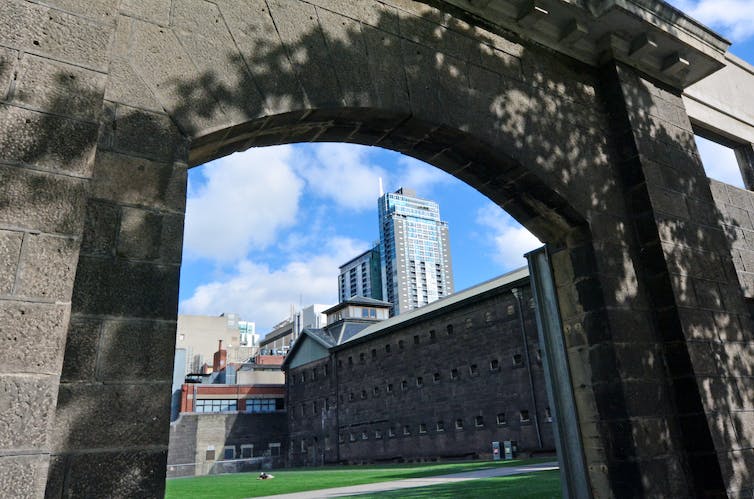 Bluestone has a somber, dark appearance – an appropriate material for the Old Melbourne Gaol. Shutterstock

Bluestone buildings were increasingly lightened with sandstone or white stucco edges and borders, while granite and sandstone became the stones of choice for grand public buildings.

Now, bluestone is prized again for its heritage value. But “heritage” is always a movable category, susceptible to changes in both fashion and feeling about the past.

There is something compelling about the way stone helps us think about time, history and change. As Jeffrey Jerome Cohen observes:

to lay hand upon stone is to press against time in material form.

Bluestone is prized today for its markers of history

In my own work researching bluestone, I’m collecting more recent personal narratives about this stone.

Many Melburnians have powerful stories about the way its characteristic square “pitchers” and long rectangular building blocks are bought and sold, collected and dispersed, recycled or moved from one site to another, from public buildings to suburban gardens and makeshift walls. It’s as if the citizens were playing a mysterious, long-range collective game of Lego.

Some of the most prized stones are those that seem to bear the ancient marks of wheels, or of convict labor, whether in the form of initials and arrows chiselled into the stone, or the more mundane markers of manual work.

Gardeners, builders and diggers of cellars struggle with the large “floaters” under old houses and in the gardens in the north and western suburbs, straining to lever them from the black sticky clay of the Merri Creek soil, famously used as the basis of the MCG cricket pitch.

Melbourne’s bluestone history is not just geological and cultural: it is also an emotional one, as we constantly redefine our relationship with this distinctive stone.