Western Australia may soon become the second Australian state to permit voluntary assisted dying, with the release on Tuesday of its Voluntary Assisted Dying Bill 2019.

As in Victoria, whose law is now just under two months old, the bill was the product of reviews by a parliamentary committee and ministerial expert panel. It’s expected to be debated in the Western Australian parliament in three weeks.

So how does what’s being proposed compare to the law in Victoria?

The WA bill draws heavily on the Victorian model. But a few important differences suggest eligible people in WA seeking access to voluntary assisted dying will not have to navigate a process as complex as in Victoria.

The WA bill aligns very closely with the Victorian law, particularly in relation to the eligibility criteria and the request and assessment process.

In both states, a person must have a medical condition that is advanced and progressive, and is expected to cause death within six months (or 12 months for neurodegenerative conditions such as motor neurone disease).

Like Victoria, voluntary assisted dying in WA would be available only to adults whose suffering cannot be tolerably relieved, who can make their own decisions, and who have been residents of the state for at least a year.

The Voluntary Assisted Dying Board, like its Victorian counterpart, would oversee the system as a whole.

This reflects in part a recommendation of the ministerial expert panel, which determined a role for nurse practitioners was needed to ensure equitable access for all WA residents given the geographically diverse nature of the state.

Read more: We don't know all the details of how voluntary assisted dying will work yet – but the system is ready

The WA bill retains self-administration as the default approach. But, if their doctor advises this would be inappropriate because of, for example, concerns about taking the medication themselves, a person can choose practitioner administration. This approach grants more discretion to the person and their doctor about how voluntary assisted dying is provided. 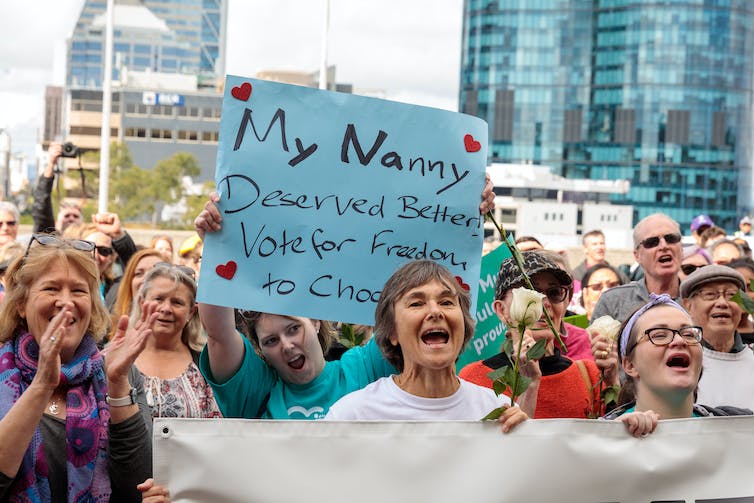 The WA bill strikes a different balance between conscience and ensuring a person’s access to lawful health care. A doctor can still decline to participate in the process, but they are required to inform a patient asking for voluntary assisted dying about their conscientious objection immediately.

The doctor is also required to give the patient standardised information. That information is yet to be approved by the government, but presumably will be about how to find a doctor who may be willing to assist.

Read more: FactCheck Q&A: do 80% of Australians and up to 70% of Catholics and Anglicans support euthanasia laws?

The WA bill also omits two significant features of the Victorian law. One is the requirement for the doctor to obtain a voluntary assisted dying permit from the government. The stated rationale for not requiring a permit is to prevent the voluntary assisted dying process being burdened by bureaucratic oversight that may not materially add to the safety of the process.

The other is the prohibition on health practitioners raising voluntary assisted dying with patients in the course of the clinical relationship. In Victoria, the patient must bring the topic up themselves in the first instance.

This has been a troubling part of the Victorian law, arguably impeding open discussions needed for high quality end-of-life care. So it’s pleasing to see this limit has not been included the the WA proposal.

We consider the departures outlined above to be both sensible and modest. Some, like the changes around conscientious objection, reflect a desire to ensure equitable access to voluntary assisted dying, rather than to widen the cohort of people who will be eligible.

Appropriately, some changes can be attributed to the vast geographical differences between Victoria and WA.

The question that now remains is a political one. Is there sufficient support on the floor of the WA parliament for the voluntary assisted dying bill to become the law?

We have previously described the politics of assisted dying law reform as “notoriously fickle”, so this is difficult to predict.

Factors in favour of reform are an established legal precedent in Victoria, and the wide and inclusive consultation process.

As in Victoria, we anticipate this will be a topic of heated debate both inside and outside the parliament.