Being born in Australia does not make you an Australian citizen. The Tamil family with two Australian-born daughters on Christmas Island awaiting a decision on their future knows this only too well.

In some countries, such as the United States, children born there automatically become citizens of that country.

Read more: Most migrants on bridging visas aren't 'scammers', they're well within their rights

This has had a negative impact on children who might fall into the gap between the passport and citizenship requirements of these two government departments.

Most of the time, acquiring an Australian passport at birth, based on providing standard evidence of identity like birth certificates, means citizenship for life.

In some instances, though, Home Affairs has the power to request, arbitrarily and with no explanation, that further evidence be provided to justify a child’s citizenship, even DNA testing.

In one recent case our firm has dealt with, the foreign mother of an Australian child who had an Australian passport was told she needed to produce evidence of citizenship for her son, even though he was born in Australia and his father had always held Australian citizenship.

The family birth certificates and passports she had provided when successfully obtaining her child’s passport were “not deemed sufficient evidence” of citizenship.

She was required to obtain a “certificate of citizenship” from Home Affairs. And to get this, DNA testing was requested to prove the Australian citizen was indeed the biological father of the child in question.

Read more: Should I get my DNA tested? We asked five experts

But the mother’s relationship with the child’s father had broken down irreparably at the time of the child’s birth, and the father refused the DNA test.

DNA testing was not compulsory, Home Affairs advised. Other methods could be used to prove the relationship between the father and son was biological.

But the alternative social evidence recommended by Home Affairs and supplied by the mother included exhaustive personal, hospital, social work and government records. They detailed the mother and child’s contact with the father and grandparents before and after the birth. This was still deemed “not sufficient”.

In effect, this shows DNA has become the only acceptable evidence, despite Home Affairs’ claims. The outcome, Home Affairs advised, is that the child’s passport will be cancelled and the child will lose his status as an Australian citizen.

In another example, the father of a child in care, an Australian passport holder, was asked to do a DNA test as part of the process of obtaining a certificate of citizenship for the child.

He was estranged from the child and the mother, and so he refused. Home Affairs made its assessment of paternity based on that refusal, and the child’s passport and citizenship were cancelled.

Citizenship can be revoked and a passport consequently cancelled in limited circumstances – mostly relating to criminal or security issues.

There is no provision in the Australian Citizenship Act 2007 for the cancellation of citizenship held by a child under 16 who became a citizen at birth. Yet it is happening.

Our firm has recently seen an increase in cases where the citizenship status of a child passport holder has been challenged if the child’s mother is a temporary resident.

While investigating a mother’s circumstances, Home Affairs delegates have required children – Australian passport holders with citizenship acquired through their father – to verify their citizenship by obtaining “certificates of citizenship”. 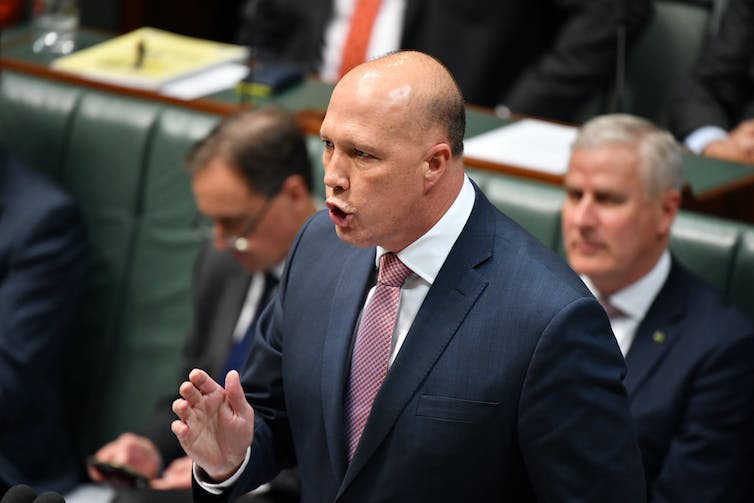 The Department of Home Affairs has rejected relevant citizenship documents like birth certificates as being insufficient. Mick Tsikas/AAP

In these recent cases, the evidence usually required to obtain such a certificate – relevant birth certificates linking the child to the father, and evidence of citizenship or permanent residence of the father at the time of birth – has been rejected as insufficient.

The common thread is the absence of the father, where family relationships have broken down. The child is consequently caught in a bureaucratic tangle: their birth certificate identifying their father remains valid, but Home Affairs refuses to accept this.

For Home Affairs, sometimes the standard evidence of identity isn’t enough to justify a child’s citizenship. And where a relationship has broken down, or if a father has moved on physically or emotionally from the child, there may be no way of providing biological proof of that paternity.

The onus of proof in this case is on the child or its mother, with Home Affairs providing no explanation why such evidence may be necessary or relevant.

A child’s birth certificate signed at the time of birth by an Australian citizen father, or social evidence of a paternal relationship, can count for nothing here.

What’s disconcerting is the apparently unfettered right of Home Affairs to request additional evidence of citizenship from children who already hold Australian passports, granted following the normal protocols, without any need for Home Affairs to explain on what basis such information is sought.

This is at odds with the practice under the Migration Act 1958, which acknowledges principles of “natural justice”. Cancelling children’s passports and withholding citizenship, effectively a consequence of their absent father and their parents’ inability to maintain a harmonious relationship, seems clearly unjust.

Refusing to accept certificates issued by state Registrars of Births, Deaths and Marriages, and overturning the capacity of the Department of Foreign Affairs and Trade to issue passports based on its own sets of rules, is yet another indicator of the enormous and – despite its denials - unchecked power of Home Affairs.

If birth certificates no longer suffice as evidence of paternity, perhaps we’ll all be looking at DNA testing in the future.

The author wishes to thank Alice Graziotti of Estrin Saul Lawyers for her contributions to this article.