If you have a question you’d like an expert to answer, send it to curiouskids@theconversation.edu.au. Which is smarter: blue whales or orcas? – Prasaad, age 6. There’s no simple answer. We don’t know for sure which one is smarter, because not everyone agrees on what “intelligence” means. It’s true that blue whales and orcas (also called killer whales) are both smart. They both have very large brains. Orcas have particularly large brains compared to their overall body size. But it’s not just about brain size. When it comes to measuring intelligence, we might also consider things like: the number of nerve cells in the brain; ability to navigate the deep, wide oceans; solving difficult problems; communicating; working in teams. Let’s look at which animal is good at which skill. Read more: Curious Kids: What sea creature can attack and win over a blue whale? What can a blue whale do? There’s no doubt a blue whale is a very intelligent animal. Blue whales eat krill, which are very tiny prawn-shaped animals that gather in huge swarms that are often far away from where blue whales give birth to their children. Despite the distance, blue whales are masters of finding krill. They are very good at navigating along coasts and across the deep, wide oceans. In fact, blue whales are so smart they can work out if a swarm of krill is worth chasing. Blue whales are very good at finding krill that are fat and in big swarms so they do not waste their energy catching smaller swarms. Blue whales catch krill by rolling on their side and opening their mouths. It is a lot of work and they have to use a lot of energy to do it. Blue whales also have excellent systems for communicating with each other. 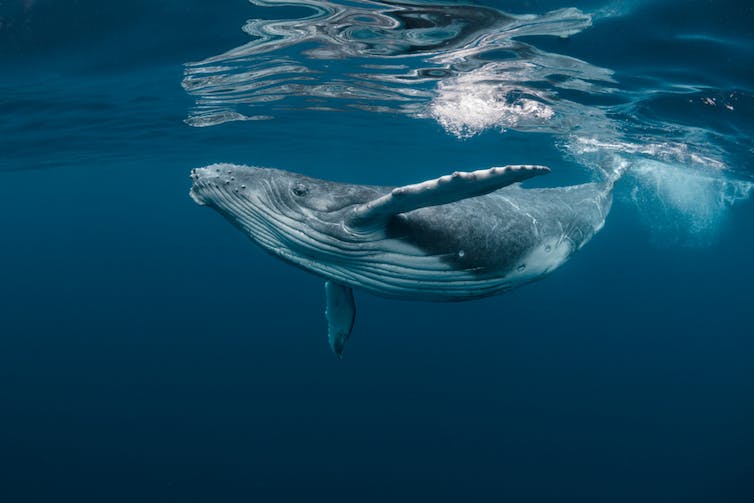 Blue whales are very good at navigating along coast and across the deep, wide oceans. Shutterstock What can an orca do? Orcas are a kind of large dolphin and they have different strengths. They are very good at working together. They form groups and hunt together for fish or other sea mammals – including whales. This is why they are called “killer whales”. They are also expert communicators and have their own language – even certain noises that are used by a particular group of orcas to show they are in the group. 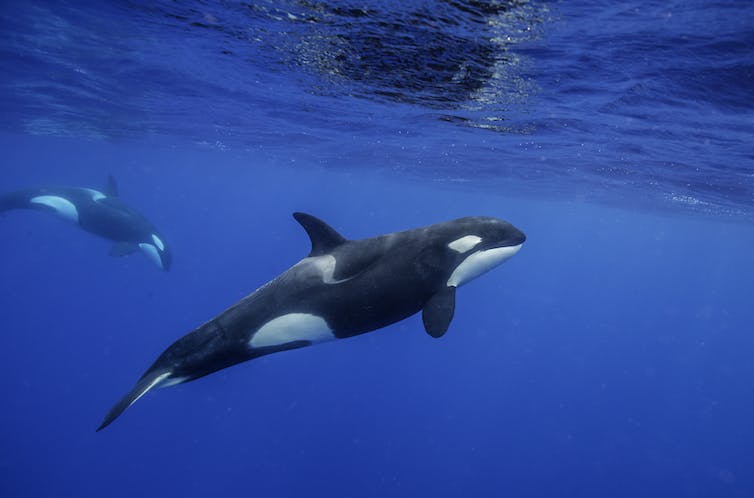 Orcas form groups and hunt together. Shutterstock They both are very intelligent in their own way Some scientists have wondered if you could measure intelligence by looking at how well animals teach their children how to behave – for example, how to find food, fight or stay safe. Orcas are masters at teaching their children exactly what to do. This involves things like hunting in groups or sneaking up on a seal and grabbing it before sliding back into the water. However, blue whales are also good at teaching their offspring skills such as long-distance navigation – in other words, finding their way around the vast oceans. Both blue whales and killer whales have their own special behaviours and skills. We really can’t say which one is more intelligent because both are very intelligent in their own way. Read more: Curious Kids: how do creatures living in the deep sea stay alive given the pressure? Hello, curious kids! Have you got a question you’d like an expert to answer? Ask an adult to send your question to curiouskids@theconversation.edu.au