Mary Shelley is famous for one novel – her first, Frankenstein (1819). Its extraordinary career in adaptation began almost from the point of publication, and it has had a long afterlife as a keyword in our culture. Frankenstein speaks to us now in our fears of scientific overreach, our difficulties in recognising our shared humanity.

But her neglected later book The Last Man (1826) has the most to say to us in our present moment of crisis and global pandemic.

By the time Shelley came to write the novel, all of them – along with all but one of her children – were dead. Once part of the most significant social circle of second-generation Romantic poet-intellectuals, Shelley now found herself almost alone in the world.

As it kills off character after character, The Last Man recreates this history of loss along with its author’s crushing sense of loneliness. 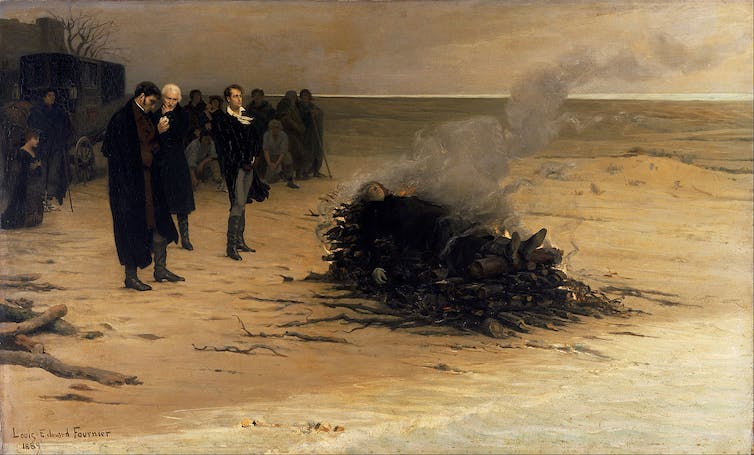 The novel was not a critical success. It came, unluckily, after two decades of “last man” narratives.

Beginning in about 1805, these stories and poems came as a response to great cultural changes and new, unsettling discoveries that challenged how people thought about the place of the human race in the world. A new understanding of species extinction (the first recognised dinosaur was discovered around 1811) made people fear humans could also be extinguished from the Earth.

Two catastrophically depopulating events – the horrifying bloodshed of the Revolutionary and Napoleonic Wars (1792-1815), and the rapid global cooling caused by the massive eruption of Mount Tambora in 1815 – made human extinction seem a horrifyingly imminent possibility. Meditations on ruined empires abounded. Many writers began to imagine (or prophesy) the ruination of their own nations.

Unfortunately for Shelley, by 1826 what had once seemed a shocking imaginative response to unprecedented disaster had become a cliché.

A parodic poem like Thomas Hood’s The Last Man – also from 1826 – gives us an indication of the atmosphere in which Shelley published her own book. In Hood’s ballad, the last man is a hangman. Having executed his only companion, he now regrets he cannot hang himself:

For there is not another man alive,

In the world, to pull my legs!

In this hostile atmosphere, critics missed that Shelley’s novel was very different to the rash of last man narratives before it.

Consider Byron’s apocalyptic poem Darkness (1816), with its vision of a world devoid of movement or life of any kind:

A lump of death – a chaos of hard clay.

In contrast to this total death, Shelley asks her readers to imagine a world in which only humans are becoming extinct. Attacked by a new, unstoppable plague, the human population collapses within a few years.

In their absence other species flourish. A rapidly decreasing band of survivors watches as the world begins to return to a state of conspicuous natural beauty, a global garden of Eden. 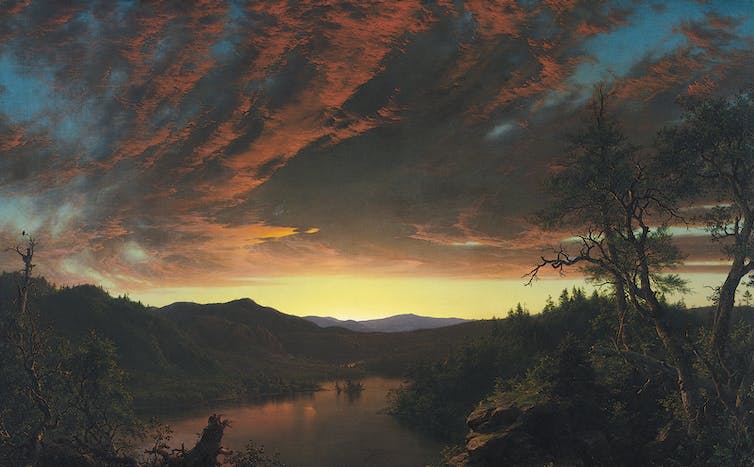 Mary Shelley imagined a world without humans could be a return of wild nature. Twilight in the Wilderness by Frederic Edwin Church, c1860. Wikimedia Commons

This is a new theme for fiction, one resembling films like A Quiet Place and Alfonso Cuarón’s Children of Men, or images of the depopulated Korean demilitarised zone and Chernobyl forest, those strange and beautiful landscapes where humans no longer dominate.

A world in crisis

Shelley was writing in a time of crisis – global famine following the Tambora eruption, and the first known cholera pandemic from 1817–1824. Cholera spread throughout the Indian subcontinent and across Asia until its terrifying progress stopped in the Middle East.

It’s disturbing today to read Shelley ventriloquising the complacent response from England to early signs of disease in its colonies. At first, Englishmen see “no immediate necessity for an earnest caution”. Their greatest fears are for the economy.

As mass deaths occur throughout (in Shelley’s time) Britain’s colonies and trading partners, bankers and merchants are bankrupted. The “prosperity of the nation”, Shelley writes, “was now shaken by frequent and extensive losses”.

In one brilliant set-piece, Shelley shows us how racist assumptions blind a smugly superior population to the danger headed its way:

Can it be true, each asked the other with wonder and dismay, that whole countries are laid waste, whole nations annihilated, by these disorders in nature? The vast cities of America, the fertile plains of Hindostan, the crowded abodes of the Chinese, are menaced with utter ruin. […] The air is empoisoned, and each human being inhales death even while in youth and health […] As yet western Europe was uninfected; would it always be so?

O, yes, it would – Countrymen, fear not! […] If perchance some stricken Asiatic come among us, plague dies with him, uncommunicated and innoxious. Let us weep for our brethren, though we can never experience his reverse.

Shelley quickly shows us this sense of racial superiority and immunity is unfounded: all people are united in their susceptibility to the fatal disease.

I spread the whole earth out as a map before me. On no one spot on its surface could I put my finger and say, here is safety.

Throughout the novel Shelley’s characters remain, ironically, optimistic. They don’t know they’re in a book called The Last Man, and – with the exception of narrator Lionel Verney – their chances of survival are non-existent. They cling to a naïve hope this disaster will create new, idyllic forms of life, a more equitable and compassionate relationship between classes and within families.

But this is a mirage. Rather than making an effort to rebuild civilisation, those spared in the plague’s first wave adopt a selfish, hedonistic approach to life.

The “occupations of life were gone,” writes Shelley, “but the amusements remained; enjoyment might be protracted to the verge of the grave”.

No god in hopelessness

Or shake his trust in God.

As they realise “the species of man must perish”, the victims of Shelley’s plague become bestial. Going against the grain of Enlightenment individualism, Shelley insists humanity is contingent on community. When the “vessel of society is wrecked” individual survivors give up all hope.

Shelley’s novel asks us to imagine a world in which humans become extinct and the world seems better for it, causing the last survivor to question his right to existence.

Ultimately, Shelley’s novel insists on two things: firstly, our humanity is defined not by art, or faith, or politics, but by the basis of our communities, our fellow-feeling and compassion.

Secondly, we belong to just one of many species on Earth, and we must learn to think of the natural world as existing not merely for the uses of humanity, but for its own sake.