While discontent at the federal government’s lack of support for the cultural sector during the coronavirus epidemic continues to grow, the few people still in jobs are readying for the optimistically termed “recovery period”.

Physical access to arts events is becoming a possibility. Now cultural leaders must discern, through a mazy gloom of stalled budgets and frayed nerves, what challenges the future holds.

A significant proportion of Australia’s cultural sector is made up of 150-plus performing arts centres in our cities and regions. Though a national figure is hard to obtain, an estimate can be derived through the Victorian Association of Performing Arts Centres, Circuit West, Stage Queensland and Create NSW websites.

It is performing arts centres – more than the museums and galleries, where social distancing measures can be readily enforced – that will be hardest hit by COVID-19: the first to close, the last to reopen.

Examining the fortunes and pressures facing Gold Coast’s Home of the Arts (HOTA) helps us understand the challenges for this part of the sector. 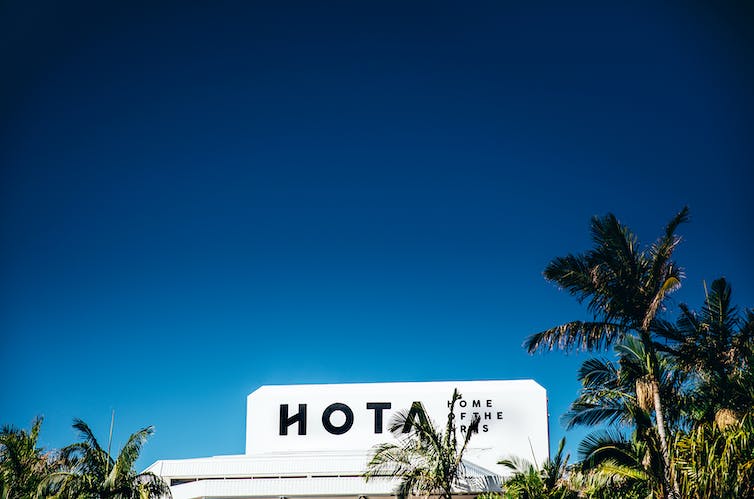 Home of the Arts on the Gold Coast. HOTA

Read more: As we turn to creativity in isolation, the coronavirus is a calamity on top of an arts crisis

There is no such things as a typical performing arts centre. But a median band might include HOTA, established in 1986.

Operating two theatres, two cinemas, an outdoor stage and several function rooms, construction is underway on a A$60.5 million gallery. Total visitor numbers in 2019 were 652,251. The forecast turnover for 2020-21 was $21 million. It is anyone’s guess where those figures will land now. 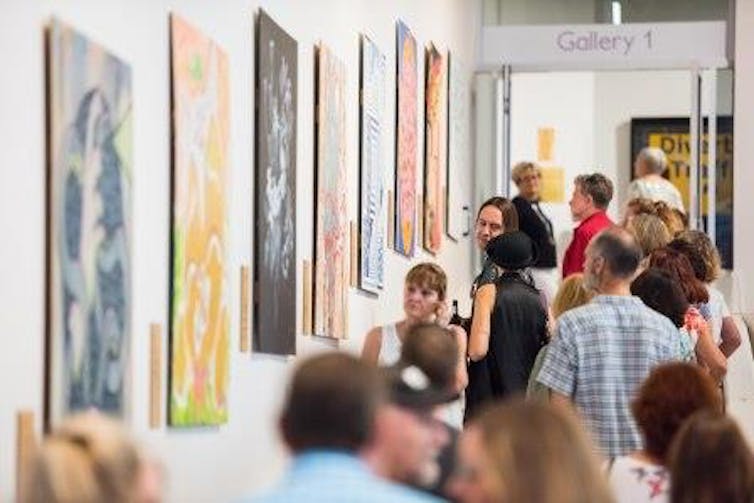 The good old pre-COVID days at Home of the Arts. HOTA

Artists were starting to get uncomfortable performing. A couple of events had the HOTA choir in them so ‘at risk’ community members were involved. And audiences started to react in an uncertain way. We wanted everyone to be safe, so we closed a week before the government asked us to.

Within days, HOTA was delivering $1000 rapid artists’ response grants. Gehrke describes the roller-coaster of the shutdown:

Along with the most heartbreaking decision of my professional life – standing-down the HOTA team, and the companies and artists due to perform here – the proudest I’ve been is how quickly we turned the situation around. We stuck to what we said we were going to do: give artists notification within a week of applying, put the money in the bank in a few days and ask for no more than three or four-days’ work. It shows it is possible to be tapped into the world in which our community lives, and what artists desire and require.

As a subsidiary of the Gold Coast City Council, none of HOTA’s 112 full and part-time staff or its 152 casuals were eligible for JobKeeper. As a result, 85% were stood down. Now, the centre comprises Gehrke, her assistant, a skeleton programming and operations team, two finance officers, and a lone ghost light on the theatre stage. Gehrke comments:

When it turned out we weren’t eligible for JobKeeper it threw into sharp relief what I call the Emperor’s New Clothes Syndrome. As a sector we’ve been pretending we are wearing elaborate clothes. But when you strip it back, the issues are a huge casual work force and artists getting lost in the hell we currently find ourselves in.

Is the modelling around subsidised art sustainable? How do you value arts and culture but not escalate ticket prices and block admission to them? Instinct says, ‘we need to get commercial’. But I think we need to get subsidised in a smarter way.

HOTA hopes to do some light programming by October, with a return to a full schedule in April 2021. This optimistic scenario is underpinned by advantages both natural and human.

A big plus is the 7.5 hectares of parkland around it, where its outdoor stage is situated. Another is the Gold Coast’s sunny weather. The immediate future, Gehrke says, “looks like limited numbers of people having exquisite picnics and listening to gorgeous music”. 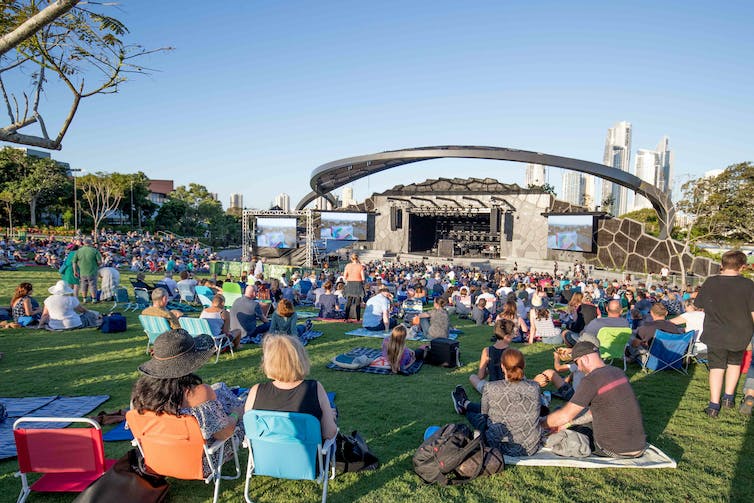 HOTA’s new gallery is due to open in early 2021. The centre has announced it will commission up to 20 Australian artists to create new work for the opening. Strong support from the Gold Coast Council is a major reason it remains on schedule - though it helps to have research biologist Ned Pankhurst as Chair of the board in what Gehrke calls “a Renaissance model” of management.

For HOTA and performing arts centres like it, the pandemic raises deep questions about their role in the community and the value they contribute.

Read more: Artists shouldn't have to endlessly demonstrate their value. Coalition leaders used to know it

Against the federal government’s business-as-usual talk, Gehrke sees the future as more fragile, in large part because the audiences HOTA serves are more fragile. It is not a simple government-is-bad/culture-is-good binary. Rather, there is need for more honesty on both sides. Gehrke is interested in how we can have a different conversation.

The JobKeeper exclusion reflects a lack of government understanding about how our sector works. But empathy and kindness are everything. I am more forgiving of our politicians now because what I deal with is nothing compared to trying to save hundreds of thousands of people from dying.

We need to say to the government, ‘this was a sliding doors moment: Australia could have looked so much better coming out of COVID-19 if the cultural sector hadn’t been completely annihilated’. But we also need to take a hard look at ourselves too. We can’t claim to be the mirror held up to society and not gaze in the mirror ourselves.

For the moment, the conversation between the federal government and the cultural sector continues to be a numbing one. As generous assistance is extended to many parts of the economy, it seems not to apply to the arts.

When the bill finally arrives, in the form of higher taxes, government cuts or both, will it also carry a “but not the arts” rider? For the sake of those at HOTA and 150 other performing arts centres, it bloody well should.

Artists on the Gold Coast haven’t stopped creating despite COVID. The Interconnectivity Gold Coast project explores connections between the people, places and nature of the city.