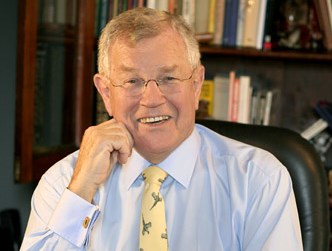 The Gut Foundation has warmly welcomed recognition of its founder and Chairman A/Prof Terry Bolin who today has been awarded the Order of Australia Medal (OAM) in the Queens’s Birthday honours for service to medicine in the field of gastroenterology.

Prof Bolin has devoted a lifetime of professional clinical practice, research and education to promote better health of Australians in the field of gastroenterology. He established The Gut Foundation in 1983 with the aim of educating the community and preventing bowel cancer.

Throughout a four decade mission to address Australia’s unacceptable death toll from bowel cancer, Terry Bolin has conducted awareness activities, lobby campaigns and fund raising. He has used  his considerable personal skills and network to initiate partnerships with the National Rugby League (NRL), high-profile business people, leading chefs and companies. He pioneered a crusade for bowel screening at population level and amongst younger age groups, putting the spotlight on a disease that many were too afraid to discuss.

Throughout his 60 year career Prof Bolin has authored dozens of clinical papers as well as  educational books and pamphlets on diet, nutrition and digestive conditions such as Irritable Bowel Syndrome, bloating, Chron’s and coeliac disease.

Under his leadership, the Gut Foundation has conducted two clinical programs in regional Australia to drive grassroots detection, GP involvement and treatment of bowel cancer in the community.

In 2007 Prof Bolin led a ground breaking clinical study of malnutrition in elderly Australians which found approximately 80% of elderly patients presenting at hospital were malnourished or at risk, affecting their recovery.

In addition to his clinical practice and involvement in a range of advisory medical committees, Prof Bolin has worked extensively on improving nutrition in the developing world, particularly amongst children in Myanmar.

Prof Bolin recently retired as Consultant Emeritus Gastrointestinal and Liver Unit Prince of Wales Hospital and Conjoint Associate Prof of Medicine University of NSW. He practised at Randwick for more than 50 years.

He continues as President of the Gut Foundation and next month the NSW Premier will launch his cookbook, co-authored with nutritionist Rosemary Stanton, which aims to help people with digestive problems.

The staff and Board of the Gut Foundation congratulate Terry Bolin on today’s well-deserved Queen’s Birthday honour which recognises his enormous contribution to the health of Australians.