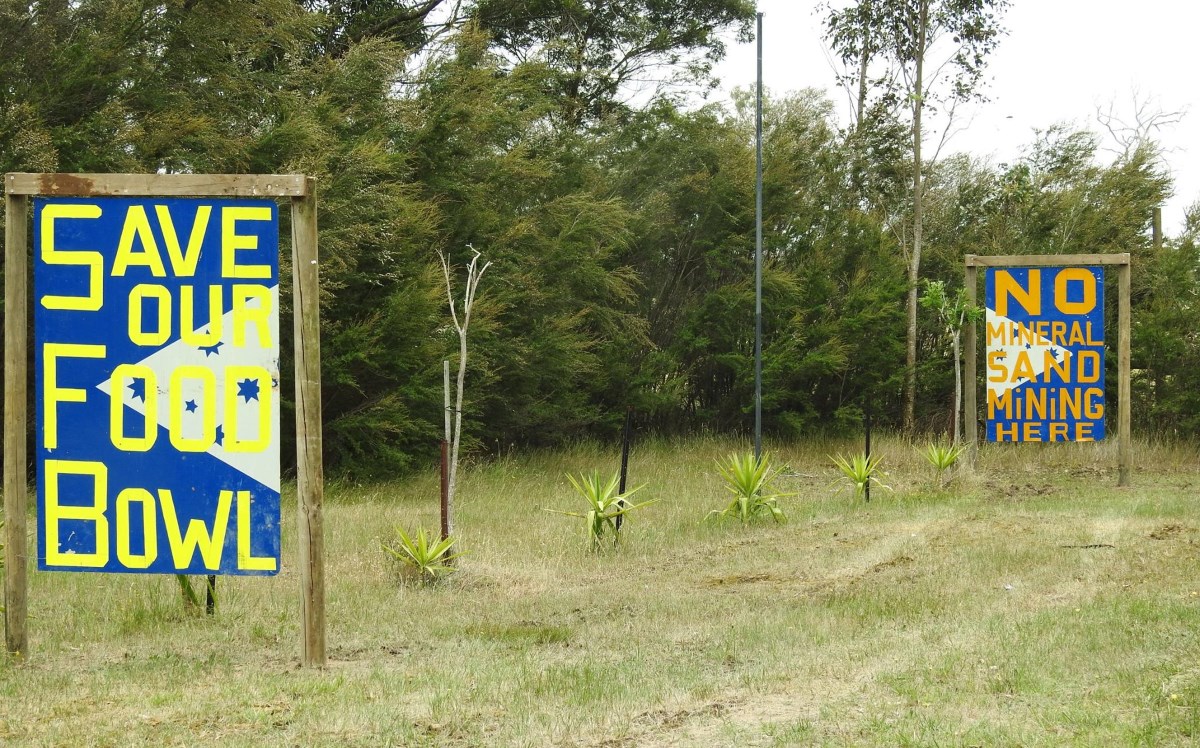 At Lindenow, near Bairnsdale in the Victorian region of Gippsland, a group of residents have amalgamated into a local fighting force tasked with ensuring that a high risk toxic heavy metal project does not go ahead. "Plan B" is that if the project is approved, stringent conditions, formulated after rules arrived at after consideration of international and domestic experiences with heavy metal and rare earth extraction, are taken into account.


The genesis of the Kalbar or Fingerboards environmental war is that a mining company, with what is said to be limited capital, proposes to dig up 1600 hectares of farm land above subterranean water courses to reach ancient sand dunes 45 metres down containing a spectrum of useful but toxic and or nuisance chemicals including Zircon, Rutile, or Titanium Metals with traces of Thorium in the region of the RAMSAR listed Gippsland Lakes.

The mining company proposes to create ten pits from which heavy mineral ore will be extracted and processed on site before transport by road to a port in Gippsland where it will be loaded on to ships for Worldwide distribution.

A primary reason for the conflict is that most of the farmers who own the land on which the strip or pit mining may occur, oppose the mining and have no confidence in the company's ability to mine the heavy metals safely.

Spokespersons for the opponents shared a range of reasons as to why they are fighting to stop the mine from proceeding.

It should be noted that the farmers do not own the underground resources on their properties. The rights to minerals reside with the Victorian Government which has issued a mining lease to the Kalbar company. Farmers do not share in profits. They are issued compensation for loss of income due to mining on their land.

The farmers have the right to refuse access to their farms to the mining company.  Should a permit be issued, the farmers will then be powerless to stop the destruction of their paddocks that will inevitably occur.

The mining company, or another entity that may buy the mining lease from Kalbar if approval is granted by the Victorian Government, will not be obliged to restore the properties to the state they were in prior to mining commencing. In this conflict, the farmers and some of the landholders of Lindenow, point out that their properties are watered from under the ground by aquifers that fill a chain on ponds even in times of drought. They believe that those water sources are below the surface of the land and above the ore body that will be extracted by open mining techniques. They contend that if approved, the mine will destroy the water courses making restoration of their properties impossible.

(2) A recent Queensland 2018 mine that did not have the financial capacity to restore hundreds of square kilometres of land following a disastrous mining venture.

Bairnsdale's population is being influenced towards each side in the battle. Local information seminars have been held at which the proponent of the open cut mine presents its version and similarly, the anti mine group letter drop and hold meetings at which they present evidence that they say, should stop the mine from proceeding.

Highly visible nasty social media battles have allegedly taken place between people who support the mine and the income they may derive and the majority of their neighbours who are actively campaigning against the proposed mines. Alleged breaches of the law have been reported to the police and some social media users have taken out or been the subject of court orders to protect people from harm or personal insults.

Here is the applicant's version of the social and financial benefits to itself and the region if the mine proceeds. View Here

Here is the opponent's version of the consequences that will occur if the mine proceeds. View here

One of the core arguments put forward to justify opposing the mine is the fact that one of Australia's largest vegetable growing areas is just two kilometres from the site of the proposed mine. The organic vegetable growers fear that pollution from ground water flowing from the ore extraction and concentration plants, will pollute the Mitchell River which is the source of their irrigation water.

Vegetable growers also point out that the large open mounds of sand taken from the very deep pits will be upwind of their vegetable fields and that dust containing radioactive heavy metals will inevitably blow on to their produce making the irrigated fields, that are less than 500 metres away, and future crops, worthless as food sources.

There is concern in the minds of opponents that respirable crystalline silica ( sand is made of silica ) will be released into the atmosphere as fine dust and that it will present a significant danger to the local population and visitors due to the fact that it can travel for long distances.

Other opponents seek to gain support from the local population by handing out flyers that point out that the Gippsland Region relies significantly on tourism. The Mitchell River abuts the site of the proposed heavy metals extraction operation and any contamination will affect the sediments of the Gippsland Lakes and make local fish dangerous to eat.

Conservationists remind all who will listen that the Bairnsdale area is a vital location for migratory birds that may be affected by pollution, radiation and contaminated water should the mine proceed or not comply with conditions of any approval.

Andrew Helps, a global authority on disaster planning and related environmental issues pointed out that the ore body that the mine applicant seeks to exploit may contain ancient bacteria and fungi.

Opponents are awaiting an EES report commissioned by the applicants touching on all aspects of the project.  There is doubt in the minds of opponents that those preparing the report are qualified to undertake examination of a project that has such significant risks due to the complexity of the chemical menu of the ore and the impact on the environment. They point out that many Asian countries no longer permit mining operations such as that proposed for Gippsland due to widespread pollution.

The Daily Bulletin interviewed some opponents of the proposed mine. Everyone we spoke to expressed concern for the region, their towns, their properties and their loved ones as well as the general population.

Reasons why some people oppose the mine include:

In some cases, the proposed mine is less than a kilometre from their homes.

There was fear that the drinking water on farm and in dams serving Gippsland towns will be adversely affected by pollution and radioactivity.

There are important National Parks a short distance from the proposed mine.

The promoters of the mine will not have the financial capacity, intent or ability to restore the land after mining.

Tourism brings more employment opportunities than the mine will during its lifetime.

Roads will become more hazardous with what is said to be 40 B Doubles trucks containing radioactive material leaving and re-entering the site each day.

The mine is causing and will cause a breakdown in social cohesion.

People at Glenaladale and Lindenow love the land under their stewardship and the existing environment and value it as an asset for future generations.

There is fear that the proponent of the mine are not releasing all the information in its possession about the chemicals that will be extracted.

The proposed mine will adversely affect property values on vegetable plots, farms on the site and neighbouring properties.

Radiation from the ore and sand piles is a threat to the health of existing residents and future generations.

There is fear that local, state and federal members of parliament are not giving the proposed mine sufficient attention on behalf of constituents.

What happens next in the battle being conducted in the Bairnsdale region? When the EES report is released by the proponent of the mine, federal, State and local governments will be asked to consider the proposal. The release will trigger a renewed round of fighting between land owners who support the mine and those who do not.

On the main battle front, the mine site owners will lobby hard to win the hearts and minds of the local population. Their enemy continues to be a determined group of local insurgents, I mean land owners and their supporters, armed with environmental science and international heavy metal extraction precedents that did not always end well.

( 2 )  A recent Queensland 2018 mine This case from this year is an example of what can happen if regulators take applicants on their word. https://www.thechronicle.com.au/news/ecological-vandalism-linc-energy-fined-millions/3412203/

Above image from proponent's web site.