In electing to disentangle from Europe without first understanding the full implications, ordinary Britons either leaped for the abyss, or more likely, expected their representatives to continue doing their jobs.

Such core responsibilities as scoping out the proposed divorce terms, then proceeding to minimise the costs through whatever arrangements were necessary to vouchsafe the national interest.

What they got instead was epic levels of political class posturing and, functionally speaking, a kind of institutional surrender.

While “leavers” implicitly sold the hope of concentrating and thus strengthening “Little Britain” against a culturally amorphous world, their project has done the opposite, materially weakening their nation, cleaving it politically, socially, economically.

Read more: What's the deal (or no-deal) with Brexit? Here's everything explained

Whole new fault lines have appeared. Ominously, they cut across the old party silos, divide the generations, split city from country, delineate the tertiary educated from the rest, and widen the gap between the people and their parliament.

It’s a story of how low-level grumbles about a peculiarly “English” identity ruptured by globalism – in London, you’re never more than three metres from a Polish plumber, and so on – were turned against the elites and used to fracture Britain from within.

Panicked into a referendum

The misleadingly titled United Kingdom Independence Party might well have stayed as a fringe operation nibbling away at the Tory pie-crust. But through cravenness, and sheer mendacity, UKIP’s niche project enlivened the Eurosceptic wing of the Conservative Party. Bit by bit, the whole divisive project was allowed to go mainstream, eventually engulfing a hapless polity.

UKIP successes, mainly in European parliament elections (ironically), caused panic on the Conservative side, leading to David Cameron’s promise of a post-election referendum.

In the great unravelling since that June 2016 vote, British prestige abroad has been shredded and the country’s guileless political leaders reduced to laughing stock. All sides have proved incapable of moving forward, yet unwilling to go back.

A large part of the explanation is that Westminster imbued what was merely an advisory plebiscite with supreme democratic virtue. In doing so, it has bizarrely written itself out of what is arguably the biggest single danger to British prosperity and foreign influence since the second world war.

Anyone quibbling with the plebiscite’s verdict is unfashionably at odds with the people and perhaps, democracy itself.

No matter that a majority of eligible voters did not vote to “leave”, or that so little could be known in advance of the colossal costs of withdrawal. Even if one accepts that the plebiscite expressed a clear public preference to withdraw, it must surely be conceded that it fell short of informed consent.

New examples of industries adversely affected have emerged on an almost daily basis since. And because negotiations with the other 27 member-states had not occurred in earnest, it was impossible to know which rules would be retained and which advantages of EU membership would be completely lost.

Everything from mobile phone roaming and the validity of British driver’s licences is up for grabs, along with border regulation, labour rules, pharmaceuticals, and countless others.

Nonetheless, in the vote’s shambolic aftermath, politicians have merely compounded the damage, cowering behind the “peoples’ will”.

A win for populism - a loss for Britons

In this sense, Britain’s Brexit careen is a double win for galloping populism. The the country will pull out of Europe at its own considerable expense while putting the viability of representative parliamentary government under acute new strains.

For conservatives, this represents a clear-cut betrayal of their responsibility as guardians of society’s bedrock conventions, not the least of which is the maintenance of public confidence in the parliamentary system itself.

Almost three years on from the vote, a bitterly divided country drifts rudderless towards the jagged rocks of a “no-deal” Brexit, with Westminster paralysed by brinkmanship, score-settling, and plain old mediocrity.

Read more: Extending Brexit: what a delay would mean in practice

A riven government lacks the authority needed in the parliament but also the courage to return to the people with the news that what they approved in the abstract in June 2016 has turned out to be considerably more complicated, and demands reconsideration.

As well as facing vast upfront costs, which were known, Britons must also gird for living standards much lower than would otherwise be the case. Its own public officials have said so in a February UK briefing paper outlining a no-deal Brexit on March 29. It said:

The government has already published long term analysis of the impact of a no deal scenario that implicitly assumes a smooth, orderly transition to WTO rules.

This estimates that the UK economy would be 6.3-9% smaller in the long term in a no deal scenario (after around 15 years) than it otherwise would have been when compared with today’s arrangements, assuming no action is taken. There would also be significant variation across the UK (Wales -8.1%, Scotland -8.0%, Northern Ireland -9.1% and the North East of England -10.5%).

It goes on to say:

This analysis does not account for any short term disruptions, which would be likely to have additional short and long run economic impacts in an immediate no deal scenario.

And, that no amount of modelling can predict all of the “complex ways in which the UK economy could be affected by exiting the EU, particularly given the unprecedented circumstances of the UK’s departure.”

This week the OECD warned that Britain’s pale growth would dip into recession with a no-deal Brexit. Even if a deal is secured, it would drop by around 1%.

Belatedly, Prime Minister Theresa May, who has been ineptly playing “chicken” with both remainers and “no-dealers” alike, has accepted that crashing out on March 29 is unacceptable. Thus she has now blinked herself.

Her mishandling of the crisis has been marked by a series of ultimatums and repudiations – an unedifying pantomime in which weakness masquerades unconvincingly as strength. 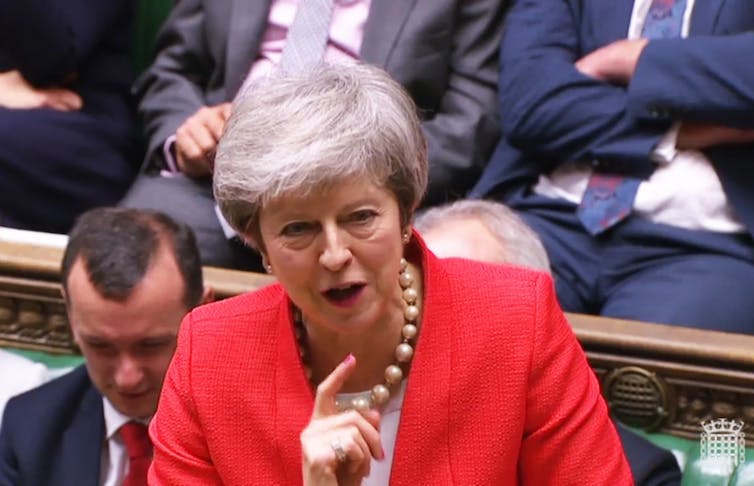 In a significant departure from that approach, the embattled PM has signalled that MPs will get the opportunity to vote to extend the Article 50 deadline – effectively shifting the cliff of a no-deal exit until later in the year.

Labour leader Jeremy Corbyn too has blinked, the long-term Eurosceptic is reluctantly backing the only honourable course: a second public vote.

Until now, his woeful equivocation, sometimes referred to as “constructive ambiguity” has gleefully added to the misery, even if its main aim has been to bridge a divide in his own ranks.

As The Economist has pointed out, the reason that both leaders have finally yielded is that each is “losing control of their own parties”.

A second vote the only option

May has promised a meaningful parliamentary vote by March 12 with whatever further concessions she can eke out of European negotiators.

But assuming her deal remains unacceptable (she lost the last one by a staggering 230 votes) and Labour’s amendments fail also, a second plebiscite appears the only legitimate option.

This would not dishonour the first plebiscite, as May and others fulminate, but rather recast the 2016 referendum as the first leg of a two-stage process. The first is approval to negotiate the best deal possible with Brussels. The second becomes voters’ approval or rejection in the full knowledge of what leaving the EU means in terms of costs, the differential impact on critical sectors and regions of the country – not least the Irish partition.

Having handed this unquantified question to the people in 2016 and then failed to make it work, Westminster should finally admit it is incapable of resolving the mess its leaders unleashed.

A second plebiscite would at least get closer to informed consent.