About a year ago, a Daily Telegraph journalist rang one of us (let’s call him Robert for convenience). She was writing a story about how political correctness was killing comedy and wanted an academic to support the argument. Now “Robert” feels that he is paid, in part, out of government coffers to express views in his area of expertise when asked, so he held forth at length about how this was a silly way to look at the issue.

If quantity is your guide, there’s more of it than ever there was in any imagined glory days of the past – satirical newspapers, comedy TV channels, radio hosts (arguably including Alan Jones), comedy festivals, over a quarter of the acts in this year’s Adelaide Fringe, pub gigs; then there’s the vast sea of allegedly hilarious YouTube videos and the rest of online humour. If it’s quality you are after, what could be more PC and more brilliant than Hannah Gadsby’s Nanette?

So nothing to see here. Move along.

And yet, much of the current comic flood often feels rather bland. It’s not that there’s a germ of truth in the anti-PC rant, but maybe it is like a piece of grit around which a pearl of better understanding might form. A lot of current comedy seems preachy when it seeks to make a satirical point – sincere, addressed to the converted in their just anger, but hardly disconcerting.

Stand-up and the modes derived from it seem particularly righteous, seldom risky. Charlie Pickering may be a witty and intelligent young man, but he’s too reassuring a presence compared to surveyors of the edge of chaos like Norman Gunston, the Doug Anthony Allstars, or the Chaser gang in their pre-avuncular phase. 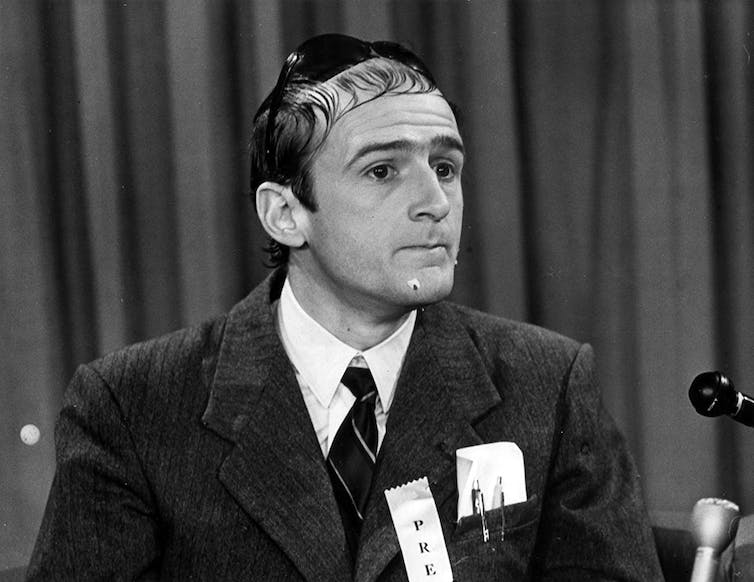 If this is so, what might be causing it?

The one real recent change in the covenant between comedians and their audience is the advent of social media, especially the ambition of going viral. We think that may be one reason why so much current comedy and satire tends to be safe, and obviously preaching to the converted.

The current king of viral satire is the American John Oliver; his Last Week Tonight is ostensibly an HBO TV show, but it has a vibrant second life chopped up in shareable YouTube chunks. Oliver rants about topical issues using a plethora of news clips and pop culture jokes, in a style popularised by The Daily Show.

It is impossible to deny both the humour and investigative depth of Oliver’s segments, which have even achieved real social and legislative results. Indeed, his political force has led some to question whether he is a journalist first and a satirist second. Like an op-ed piece in a traditional hard news publication, Oliver’s opinion on a topic is always clear and obvious from the get-go. Sadly, due to our increasingly polarized politics and the echo chamber effect of social media, this also means Oliver’s satire is easy to ignore for those who don’t agree with his arguments.

Australian television satire largely follows in the footsteps of Oliver and Last Week Tonight. Shows like Charlie Pickering’s The Weekly, Shaun Micallef’s Mad as Hell, and Tom Ballard’s, now defunct, Tonightly all feature a (white, male) host “going-off” on the news of the day, usually via clips documenting the latest crime against logic committed by Andrew Bolt or the nitwits on Sunrise.

Tonightly versus Sunrise on ‘a second stolen generation’.

Although they lack the writerly polish of Last Week Tonight, these Australian shows have similarly agreeable progressive politics and a vague goal of informing whilst entertaining. They also each have Facebook and YouTube pages full of digestible videos waiting to be shared, though it’s unlikely anything here will move anyone’s partisan needle.

Maybe this is an unreasonable expectation, as satire seldom changes minds no matter how conclusive those who already agree with it find the critique. But the tendency to confirmation bias seems particularly strong in this moment and mode. As Ben Neutze has written in his critique of The Weekly:

The editorials presented by their hosts are meant to set an agenda and become viral content — the kind that people who share the same opinion can point to on social media and say: ‘That’s what I mean! That’s my argument!’

Is this the best Australian satire can hope for in the online age, to be the funnier rendition of an opinion someone already holds? Not necessarily. There is still some inventive and even unsettling satire being produced and shared online in this country.

One example of edgier online material is The Honest Government Ads. Produced by Juice Media, a small Melbourne-based film company, these short, satirical videos co-opt the upbeat tone, corporate muzak, and smiling spokespersons of actual Australian government campaign videos, all whilst taking aim at the body politic’s complacency on a wide range of social issues.

Parody and irony are classic tools of satire and their powers are amplified here by the way Honest Government Ads are disseminated through social media sites like Facebook. A lack of context means your unsuspecting, conservative uncle is free to stumble upon a posted video and start nodding in agreement to the idea of making it “mandatory to only have fun on January 26”.

Whether or not anyone could really miss the irony in a video that joyfully refers to Australia Day as “Amnesia Day” is debatable. Still, there is plenty of research to suggest even blunt irony will not always get between the audience and its preconceptions. A great study from 2009 that surveyed liberal and conservative students who watched the satirical TV show The Colbert Report, found that:

Perhaps that is why Colbert took to fronting a “straight” tonight show?

Anyway, the federal government was certainly worried enough about the possibility of people misunderstanding the Honest Government ads to send Juice Media a “cease and desist” letter regarding its use of the Commonwealth Coat of Arms. Apparently the average Aussie can’t be trusted to know that the real coat of arms doesn’t feature an alien skull, or that “Australien” is not the usual spelling.

The Honest Government Ads new coat of arms now has a proud motto “not the real logo” front and centre in a meta-video that digs into the “shit-c..nts” at Juice Media who have “tricked millions of hard working Australians into believing their government is honest”.

This video is featured on Juice Media’s Facebook page, where it has a garnered just over 400,000 views. This is nowhere near Last Week Tonight’s regular seven-figure viewer numbers, but still a significant achievement for a small-scale operation with no platform other than the “click and share” of social media.

It’s the sort of work that makes one cheerfully speculative about satire’s possibilities in an age when Facebook is the main news source for millennials and the main “fake news” source for everyone else. Even if there are legitimate worries about the hazy border between satire and fake news, the prospect of independent artists like Juice Media continuing to lob clever, irony-grenades into our daily scroll is still enticing.

Nonetheless, this type of satirical comedy is still predominantly preaching to the converted (and the odd humourless bureaucrat or ministerial aid); it’s just clever enough to do so in a way that tricks its enemies into participating in the sermon. If anything, the ironic humour of the Honest Government Ads probably serves to strengthen the online echo chamber, creating a divide between those who “get it” and those who don’t. And since no-one really feels sorry for the government as a bureaucratic rule enforcer, there’s a clever point being made here, but nothing really dangerous.

Truly challenging satire discomforts even those who “get” it. For example, Get Krack!n’s deadpan takedown of Sunrise et al. frequently straddles the border of bad taste in a way that makes its viewers complicit just for laughing.

Or consider any one of a number of sketches from ABC’s Black Comedy, whose three seasons have been giving humorous voice to a genuinely under-represented and often oppressed group.

Our “favourite” – really the one that made us feel most vertiginously and unanswerably undermined as white Australians – is a skit where a sick Indigenous girl is granted a wish by the “Ultimate Dream Foundation” and simply asks for her people’s land back.

Using sick kids to make a point is seriously un-PC, and it’s especially risky in the wake of the Chaser’s Make-A-Wish controversy, where they were driven to apologise. But the payoff for Black Comedy is equal parts hilarious and disconcerting.

The dark irony of the charity workers’ bewildered response – “well we either give the Aboriginal people their land back … or we cure cancer” – is far more powerful than Tom Ballard calling a politician a dirty word, and trumps even the “gotcha” trickery of the Honest Governments Ads.

There is no exit for even the most progressive and well-meaning non-Indigenous viewer here; no pat on the back for “getting it”. Whilst an Indigenous person already knows the scale of deprivation, the colonial viewer can either confront their guilt or bury it even deeper.

Sadly for such brilliant, searing satire, the video’s roughly 5,000 views on YouTube suggest it hasn’t gone anywhere near viral — more evidence that the internet can be stupid. Perhaps the skit’s failure to neatly encapsulate a partisan talking point or offer any sort of redemptive action hampers its shareability. You can cut your progressive identity to shreds on the ironies in this skit, and maybe it’s not cool to extend that risk to your social media friends.

After all, despite our grumbling about filter bubbles and personalised algorithms, research suggests that our own choices about what to share are as responsible for social media echo chambers as anything else.

We build the house of comedy we live in, and at the moment it is designed for tickling our confirmation bias and not much else. So the next time something uncomfortable manages to sneak past security, something that traps the laughter in your throat, for the love of comedy: share it.