When we take our seats in Adelaide’s Festival Theatre the air is already thick with haze. Its density suggests something ominous, a kind of collapse. A single, melancholic musical line pierces through the darkness as a body in motion comes into focus.

Soon the stage is filled with the full company of ten dancers, casually attired in khaki and beige, none standing out from the crowd. We see bodies in constant motion, like cells dividing and reconfiguring endlessly when looked at through a microscope.

Grand Finale employs the movement vocabulary that audiences have come to associate with Israeli-born, London-based contemporary dance choreographer Hofesh Shechter. Dancers swirl, whirl, jump in place and move like human percussion machines across all dance styles. When the dancers are in motion, all is fluid and there is no rest. Everything and anything could happen. Nothing can be predicted.

While the work’s title might suggest something rousing and operatic with a clear narrative and heroic resolution, this is anything but that. It’s as if we’re witnessing something big, but don’t know what. We are silent spectators to something terrible unfolding, a global catastrophe, possibly a literal “grand finale” for the species. 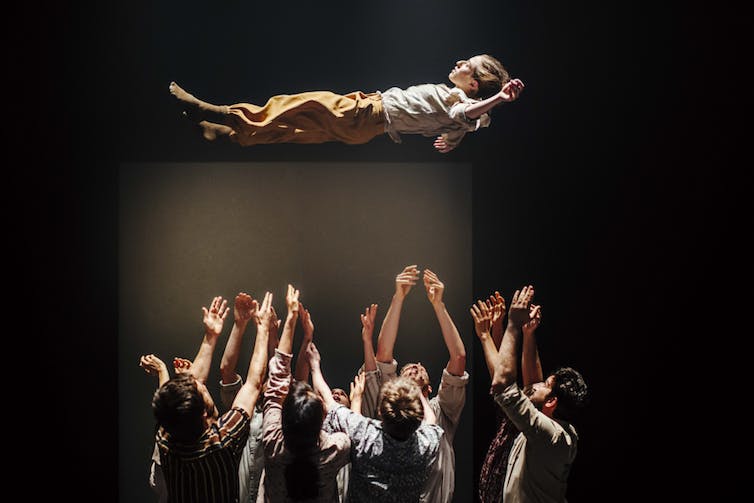 Dancers respond to forces that seem to register on their bodies but are unseen to us. They move alone and in groups, countering those provocations with different tactical moves.

Bodies become objects, human sacks of flesh that are dragged and pulled around the stage, arranged and posed, held, cradled, then reconfigured. We feel the weight of these human bodies that have been drained of life. It is poignant, difficult, even painful.

At other times dancers are pulled from heaps of bodies and become human wreckage, mute, mouths agape, unable to speak, as if they have been atomised, burned alive in an atomic blast.

Designer Tom Scutt’s enormous but remarkably mobile panels, which can look like giant concrete walls, are manipulated by dancers from behind, creating the spaces that shape and contain movement. They are co-actors in the unfolding drama, back drops, places of refuge and of no escape, prehistoric monoliths used for unknown rituals, even monstrous, menacing grave markers. 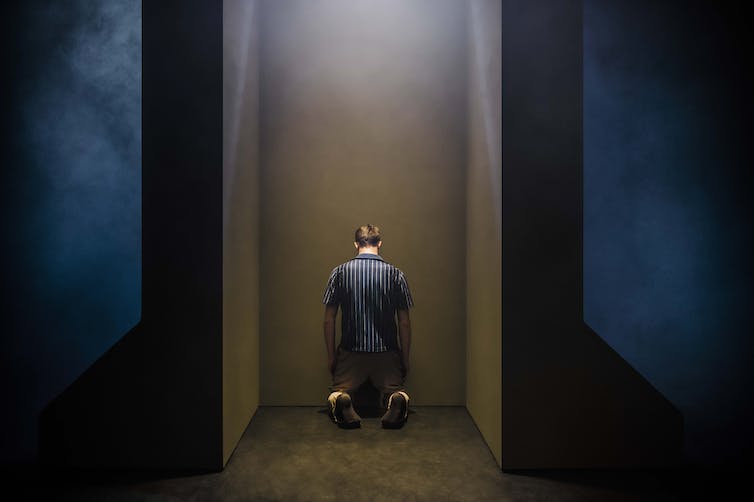 Like other works by Shechter, notably Political Mother and In Your Rooms, Grand Finale is highly percussive, with beats activating human movement, which at times becomes frantic, even painfully frenetic. In this work he adds an onstage string quartet with two cellos, a violin, and an acoustic guitar. The musicians seem to disappear and reappear in different areas of the stage, thanks to Tom Visser’s magical lighting.

The sometimes mellifluous, often melancholic musical line is contrasted with a soundscape of industrial noise: the sounds of static, metal scraping, crashes and booms, buildings falling down or a ship – the Titanic perhaps – hitting an iceberg.

These two sonic worlds constantly compete, with one dominating the other but never for long, as the other line is eventually born from the sonic chaos. The dancers similarly emerge from and move through a world that is unstable, chaotic, ever-changing.

Because of the way sound, light, movement, and percussion come together, Shechter’s choreography can be almost trance-inducing in its intensity and relentlessness. It can seem to invoke the ecstatic, as if dancers were seeking to connect with some higher power, springing up and down, arms splayed out, their hands reaching for something beyond the reach of mere mortals.

When the dancers advance downstage toward us, executing martial arts moves that sometimes resemble a Māori haka, freezing to briefly hold stances of power and strength, they can almost make our hair stand on end. 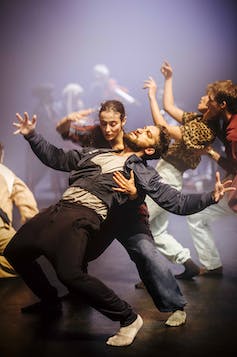 In the second half of Grand Finale, the dancers seem to inhabit a new world order. Rahi Rezvani

When they reappear from the darkness in the second half of the work, they seem to inhabit not a world falling apart, but instead a brutal, new world order. The giant mobile panels now increasingly resemble the walls that cut through Jerusalem, angry, impossible to scale, closing in on the dancers and separating them from one another.

The dancers break apart, lonely and isolated, and the walls scatter. A feeling of urban warfare prevails, with rapid tempo shifts forcing the dancers together and driving them apart.

It’s as if they’re dancing in and around a ruined world. Suddenly all stop to stare at a couple kissing against a slice of the wall, an unexpected and unprecedented act of intimacy.

As the work draws to a crescendo, with their backs to us the dancers fall into a line running upstage, swaying out of sync with one another, delicate, broken, but still moving. Suddenly they stop, and find themselves enclosed in a sarcophagus-like structure. It opens and the dancers move into the breach, into the light, and fade from view.

This is a Grand Finale for which there is no known ending, only the certainty that those who survive will step into different world than the one they left behind.