This year marks the tenth biennial Tasmanian Arts festival Ten Days on the Island, and the first under new artistic director, Lindy Hume. Since it began in 2001, the festival has always been ambitious: seeking to showcase Tasmanian art, bring international works to the island, and at the same time be a festival for the whole of the state, rather than just the hub of Hobart.

Its challenge has only increased with Tasmania’s now burgeoning festival scene, which includes The Unconformity, Dark MOFO, and the Festival of Voices to name just a few.

It should come as no surprise then, that this year’s Ten Days adopted a new approach, moving from ten consecutive days to programming split up over three distinct weekends. The first two weekends took place in the state’s north west and north east respectively, with the festival due to conclude this weekend in the south.

This distribution of work across the state makes it a challenge for all but the most intrepid to see everything. With this in mind, I have focused on the festival’s first two weekends, but to summarise even these two weeks is a challenging task.

The diversity of work reflects the different regions of Tasmania – often proud of their isolation. While this creates a challenge in finding coherence, the work of these two weeks was notable for a number of key themes: belonging, life, death, and Tasmania’s colonial history.

Ten Days officially began at dawn on March 8, on the beachfront at the Devonport surf life-saving club in the state’s north west, with Mapali – Dawn Gathering.

Narrated by the commanding voice of Dave mangenner Gough, the ceremony began with a Welcome to Country that celebrated the local Aboriginal (palawa) communities, with the sweeping and smoking of the beach, the gathering of kelp to make water carriers, and the unbroken practice of crafting intricate shell necklaces.

This year’s Ten Days on the Island festival is spread across three weekends and three parts of Tasmania.

A short time later, Jessie Pangas and Anne Morrison’s Here She Is opened at Devonport’s Stewart St Gallery. There could have been no more fitting work to celebrate International Women’s Day.

A collaged, stitched and woven collection of stories and connections between women of the north west coast, Here She Is was built from audio recordings, participant submissions, archival materials and artistic responses to these materials. 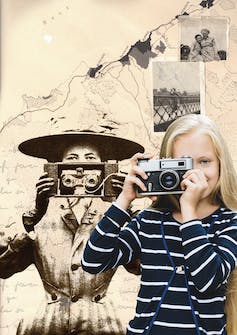 Here She Is was the perfect work for International Women’s Day. Provided by Ten Days on the Island

It is a dense work, constantly drawing you closer to make out handwriting and listen to stories. Yet evocative spaces open up between the fragments, pictures, and conversations, where just as much is left unsaid. This induces viewers to participate in the work through the addition of their own recollections, stories and mementos of the women in their lives.

Another hour’s drive along the north coast brought us just near the picturesque coastal township of Boat Harbour, for Big hArt’s Acoustic Life of Sheds, a series of intimate concerts held in sheds throughout the region.

It was a rather genteel and romantic affair, as we travelled from an industrial potato shed, to woodworker’s sanctuaries, a derelict grain silo, and a shearing shed.

In the shearing shed, a collaborative suite of songs written and performed by Lucky Oceans and Heath Cullen closed the tour. The songs were written from the perspective of nonhuman things: from the shed we were sitting in, to an artificial intelligence in the not too distant future. A delightful and masterful set, these voices were used to interrogate the more problematic foundations of our “shed-romanticism”: their footprints on the landscape and the consumption behind the junk that fills them.

But as an audience member, I longed for a little more breathing space. The pace left little time to engage with fellow patrons, the sheds, their owners and their histories. 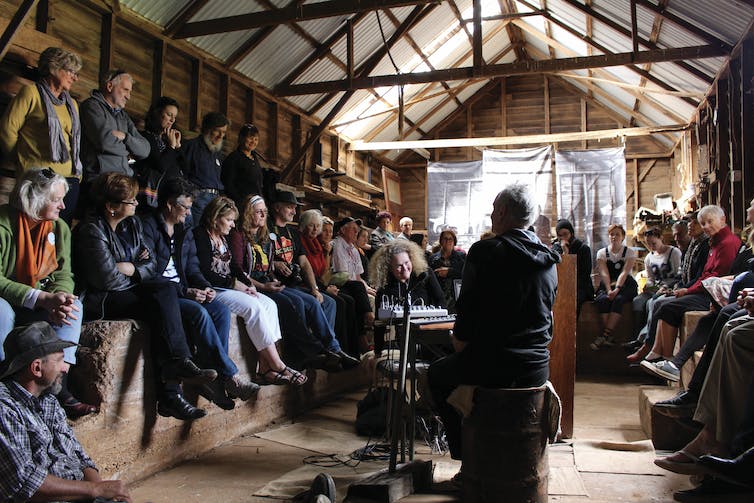 Audiences for Acoustic Life of Sheds visited locations including an industrial potato shed, a derelict grain silo, and a shearing shed. Beth Sometimes

The second weekend took place in the state’s north east. Tamar Island, just a short drive from Launceston, was the site for youth dance company Stompin’s ambitious new work, Nowhere. The work explores this island on an island, its colonial and pre-colonial history, and most poignantly, its future.

The young troupe built toward a mesmerising sequence that evoked the interplay of natural plant formations and wind patterns, leading to a penultimate gesture equal parts touching and devastating. As they broke away and wandered in single file from the island and into the sunset, Nowhere asked us what, and even who, will be left to applaud when our environment disappears?

Later that week, forty minutes west of Launceston, I was ushered by a stage manager in blue scrubs to an upstairs room of Deloraine’s Empire Hotel, to see Robert Jarman’s new work The Protecting Veil.

Delivered by Jarman in a matching set of blue scrubs, The Protecting Veil uses Nicolas Poussin’s second series of sacrament paintings as its structure – a structure also utilised by British writer, director and performer Neil Bartlett in his 1997 work, The Seven Sacraments of Nicolas Poussin .

Drawing on the rituals and figures depicted in these seven images, Jarman delivers an art history lecture of sorts, weaving in personal experience and contemporary politics, and reflecting on the ways that rituals structure our lives, from birth to death.

Guitarist David Malone shares the stage throughout. His musical interludes help build a certain feeling in the work, heightened by the room’s arrangement and the scrubs: the feeling of waiting in a hospital or funeral parlour.

The show warms up, literally and figuratively, as we reach the sacrament of communion (taken as a joyful tea break with jam rolls) before moving on toward death. When this moment arrives, the intimate audience dutifully obeys the request not to applaud, but our reverence – the ritual – seems a little forced.

Perhaps this is because of a scene I had witnessed just before the show began. Somewhat serendipitously, while waiting downstairs at the public bar of the hotel, I saw the Deloraine social club raise their glasses (and I mine) to a recently deceased member of the community. The collection of downstairs rituals were profoundly ordinary, but touching in their camaraderie – from the raffle held in her honour, to a ribald rendition of the folk song Old Grey Mare.

Read more: Hail MONA! But what about the rest of Tasmanian art?

Four video works are projected from inside onto each of the four walls. Each piece takes an instance of violence researched through colonial records, and attempts to present the evidence though an aesthetic lens. These pieces seek to draw our attention back to the deep scars of Tasmania’s history, not only between invading colonists and the Indigenous peoples, but also among the settlers. 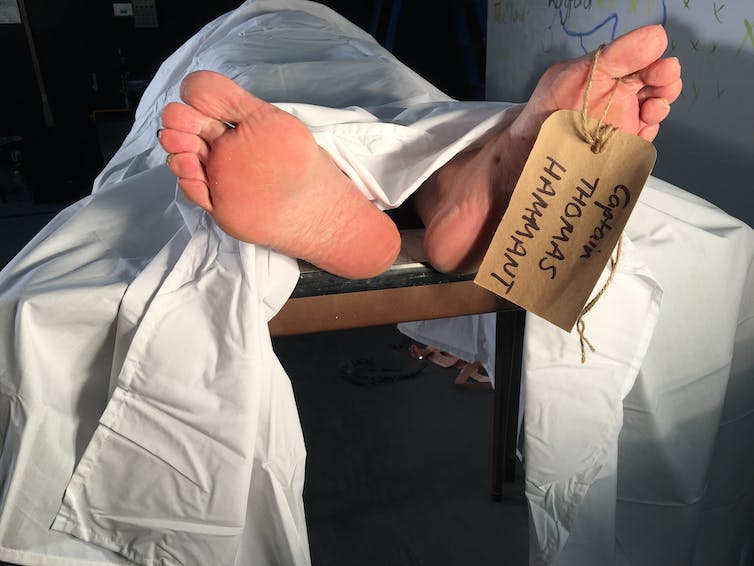 The simplicity of these works allows the researched accounts of this violence to cut through. In fact, they quite relentlessly confront the wounds that haunt Tasmania - wounds that Greg Lehman notes must be properly addressed before they can begin to heal.

In moving their base of operations to Burnie, and embracing a more distributed Ten Days, the festival has broken away from the old. This new generation model offers a valuable example of how arts and culture might be curated for and by Tasmania’s diverse population, giving great voice to the north of the state.

Change is always difficult, but it is necessary as Tasmania becomes more and more globally connected. Ten Days on the Island serves a vital role in developing a diverse cultural sector (which is in many ways dominated by MONA and its festivals) and supporting the next generation of Tasmanian artists to speak not only to the island, but also to a national and international audience.