Chances are you’ve walked over silver moss (Bryum argenteum) countless times without giving it a second glance. This moss, at home in moist environments as well as hot and cold deserts, is also a common denizen of cities worldwide and finds shelter in our pavement cracks.

Also known as silvery thread moss and silvergreen bryum moss, it grows in all states and territories of Australia, particularly in towns and cities. 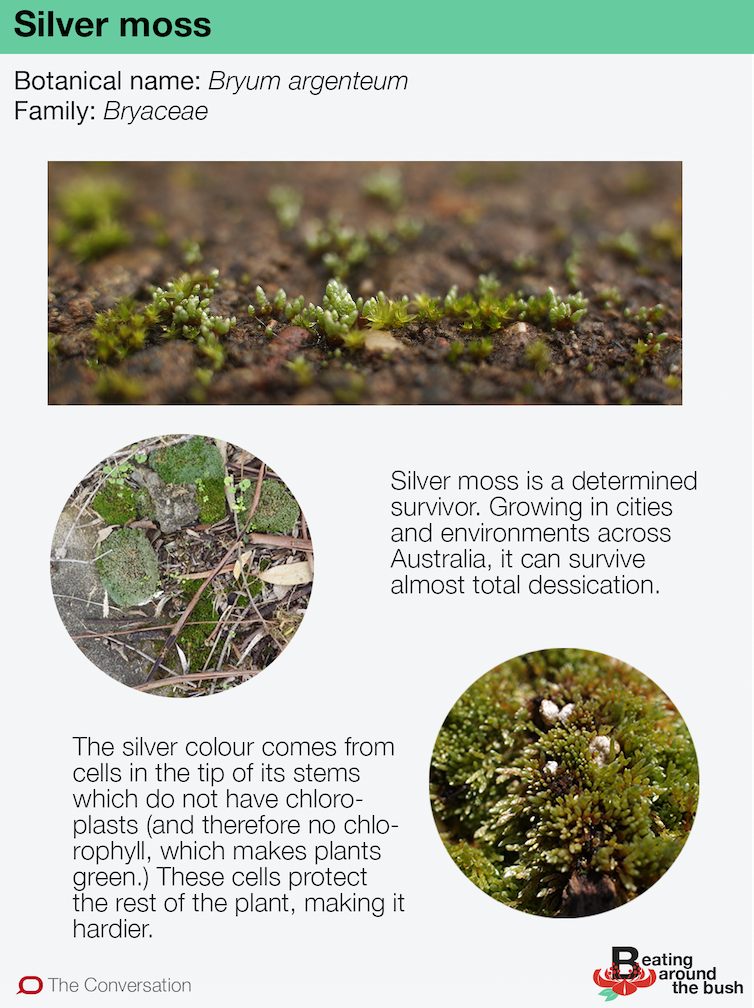 The Conversation To the naked eye, it appears as a tiny silvery green ribbon or small cushion, with stems up to 1.5cm tall, but often only a few millimetres high. With a hand lens, its crowded, tight buds are visible, while a microscope reveals the reason for its silvery appearance: cells in the top portion of its minute leaves do not have chloroplasts (and therefore no chlorophyll) and do not appear green, but instead make a transparent silvery tip. This portion of the leaf protects the chloroplasts deeper down from harsh sunlight. Like many others in its genus, the leaves have a rounded appearance with a central rib, or costa, that ends well before the tip. As with most moss, these simple leaves are only one cell layer thick, so it exchanges gases and water with the exterior by diffusion. The silver moss is a survivor. We remove native vegetation from our cities and clear forest canopies but it can cope with this new version of home. We swap forest floor for hard, impervious surfaces that utterly change how water moves across the landscape – for instance, evaporating much more quickly – but this moss makes use of water when it can, switching on its photosynthesis processes when there’s enough water, and hunkering down when there’s not. Read more: What's behind Japan's moss obsession? This cycle can occur over the duration of a day, with photosynthesis starting in the early morning light when there’s a little dew on the leaves, and closing down as the day progresses and the moss dries, but it can also play out over much longer periods, even years. It can do this thanks to its particularly strong tolerance for desiccation, a trait which varies across moss species. This isn’t just the ability to withstand drought. It’s more radical than that. It is the ability to shut down all metabolic processes in the absence of water, and start them up again when water is available. This might not sound too impressive, but in the majority of plants drying out totally involves serious damage at the cell level, with membranes and cell organelles becoming brittle and breaking and macromolecules such as DNA being damaged beyond repair. 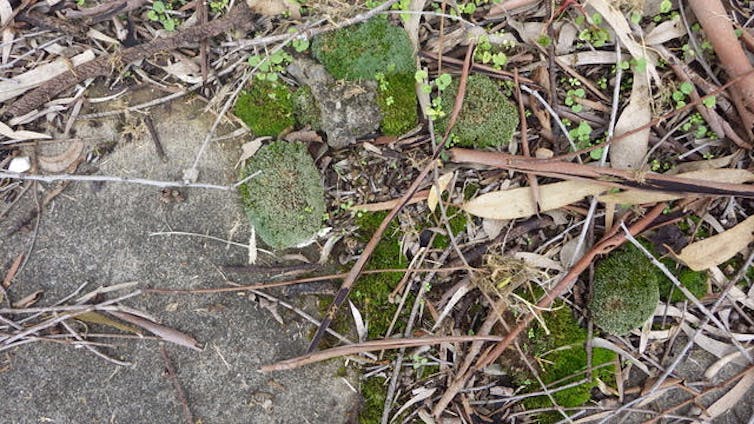 Silver moss growing on a Wollongong basketball court. Alison Haynes, Author provided Silver moss uses sugars to create protective glass-like compounds to protect its cells from irreparable damage. Because of its tough nature, the silver moss is widely studied to further understanding of how plants cope with a range of other stresses too, from UV-B radiation and sand burial to trace metals and excessive light. Silver moss is not showy and quite often looks rather dusty in city environments, but it’s nice to know that the 19th century botanist Ferdinand von Mueller collected it twice in 1852, in Adelaide, five years after his arrival from Germany. He moved to Melbourne that year, was appointed government botanist, and founded the National Herbarium of Victoria a year later, in 1853. These two samples must have been among the first deposited there, making them our oldest specimens of this species in Australia. While I don’t know exactly what species were used, Aboriginal Australians took advantage of the moisture that moss collects. In Queensland, for instance, Indigenous people used to squeeze out water from a moss clump then replace it carefully, to use again. Read more: War and peat: how bog moss helped save thousands of lives in World War I For me, moss is on the cusp of the macro and micro world. Just big enough to see with the naked eye, it nonetheless draws you in and down to a smaller world. I’ve become a moss tourist. Whenever I go to a city, I don’t just look up at the sights, I also look down! Mosses like Bryum argenteum remind me of the wild even within the depth of a city landscape. They are a reminder that we may remove native forests, but still the most minute spores of living organisms will come in and find a place to live, if not thrive.