Pick your day — dark, rainy, lamps on — let those songs fill the room, and you’ll be lost in the most beautiful fog in the world. Stop all the clocks, Scott is gone — but the voice that made that world is here forever.

In Sydney in the very early 90s, my buddy Roger and I wanted to start a kind of acoustic ensemble. We were in a swooning, noisy, melodic guitar band called the Plug Uglies, darlings of the inner west, but we needed something else. Our big idea? We wanted to play the songs of Scott Walker and Jimmy Webb. We wanted to have a go at those grand stories, the soaring melodies. We called our little ensemble The Drunk, The Monk and The Spunk. (Don’t ask.) My fingers still thrill at playing those wonderful chords.

Scott Walker – born Noel Scott Engel in 1943 - almost exists outside time. His voice first came to greet us in the 1960s, in the Walker Brothers. A trio of Americans, not brothers at all, who found success in England in 1965 with Make It Easy on Yourself, My Ship Is Coming In and The Sun Ain’t Gonna Shine Anymore – heartfelt and emotional pop ballads, with massive orchestral arrangements, and enormous, exploding choruses, produced for Philips Records by Johnny Franz.

The group, rivalling the Stones or The Kinks in popularity, collapsed under the pressure of this instant stardom, and Scott went on to release four solo albums between 1967 and 1969 – Scott, Scott 2, Scott 3 and Scott 4. 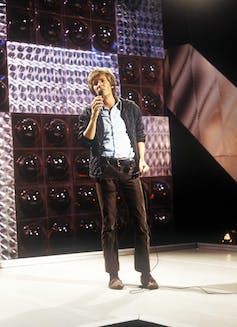 This was the Golden Age of the songwriters. The cultural earthquake of 1968 had been followed by a wave of astounding music, and Scott Walker lies at its heart. These records shudder and swell, his sometimes obtuse lyrics adrift on poetic orchestral arrangements, mainly by Angela Morley, which define the notion of Baroque pop.

It’s quite hard to measure the influence of these four records, but it runs deep, and in the last day many have been eloquent in their praise, from Thom Yorke and Damon Albarn to David Sylvian, Jarvis Cocker and Richard Hawley.

David Bowie owed Walker a huge debt, partly repaid by his contribution to the making of 30 Century Man, an excellent documentary on the work of Scott Walker.

Scott 4 was a commercial failure, and Walker disappeared, back into his quiet life. The Walker Brothers re-united in the 70s, and released three albums, but they also didn’t sell and he disappeared again. But in 1981, Julian Cope from Teardrop Explodes released a compilation of Scott’s 67-71 work, Fire Escape in the Sky: The Godlike Genius of Scott Walker. This album influenced a generation of post-punk musicians, and became the momentum which led Walker into the next phase of his career.

The albums Climate of Hunter, Tilt and The Drift were released across the next two decades, as Walker created a new music, unsettling and evocative and difficult. By now he had joined the British label 4AD, the home of the beautiful outsiders, in the company of true fans like The Cocteau Twins and This Mortal Coil. Rob Young has described elegantly in the Guardian this later period of Walker’s creative output.

Although it appeared on 1978’s Night Flights, I find Walker’s song, The Electrician, in some ways, an aural lexicon for his entire career. Unsettling, ethereal soundscapes almost cut loose from tempo or time, bookend a rich centre, with grand melodies and exploding strings, harp notes cascading into Spanish guitar flourishes, and then the death knell of the de-tuned guitar leading us back into the cavern of torture.

But the song I, and many others, return to as a touchstone is Montague Terrace (In Blue) with its floating verses, a slow, ticking clock that, true to form, erupts into a grand chorus - “But we know, don’t we, And we’ll dream, won’t we?” It became the centre of our set of acoustic covers, the cello and accordion swelling under the chorus, the drifting trumpet solo. It was The Drunk, The Monk and The Spunk’s finest moment. A recording exists somewhere.

In 2017, 4AD staged a BBC Proms event to honour the music of Scott. One of the highlights for me is Norwegian singer-songwriter Susanne Sundfør wrapping her wonderful voice around The Amorous Humphrey Plugg (from Scott 2) – it peels back the domestic façade, the woman trapped and angry, with children and home, as mired in frustration as the man is trapped in his endless thirst, the nightly pleasures of the city.

The Apartments’ Peter Milton Walsh describes this ability of Walker’s: “His lyrics were so vivid and the language was completely personal, full of night and rain and loneliness. People in a certain kind of trouble. He owned that world, just as Sinatra once did.”

And, like Sinatra, Scott Walker had a voice. His will be with me as I drift into my twilight, as timeless as memory:

Oh to die of kissesEcstasies and charmsPavements of poets will write that I diedIn nine angel’s arms.