Scott Morrison needed the budget to change the game for the election. But its political impact has seemed tepid rather than transformative.

And Bill Shorten has shown that having the last parliamentary word in budget week can be used to grab the mic from your opponent.

By the time parliament broke on Thursday night, everything was in place for the election, except the announcement of the date, with the three options Morrison had earlier canvassed - May 11, 18 or 25 - hanging out there.

Read more: The budget super change that helps the wealthy at the expense of the young

In his Thursday budget reply, Shorten delivered a carefully-targeted pitch to voters that invoked hope and promised fairness. He came up with a big Medicare initiative, and he outsmarted the government on its tax cuts, the budget’s centrepiece.

Shorten seeks to use what Labor dubs “the politics of hope” as a response to voters being switched off by all the cynicism. “We choose hope over fear. We choose the future over the past,” he said.

His $2.3 billion promise to slash out-of-pocket costs faced by cancer patients played to a traditional Labor strength - health policy – and should be popular.

The opposition aims to put Medicare at the forefront of its campaigning, as it did in 2016. But there is a notable difference.

Then it ran the negative “Mediscare” offensive. Now the emphasis is positive, with an ambitious pledge to extend Medicare, helping cancer sufferers, vulnerable and numerous, who often face financial burdens.

“One in two of us will be diagnosed with cancer at some stage in our life,” Shorten said, as he outlined “our vision for the most significant investment in Medicare in a generation”.

Labor has more than neutralised the budget’s immediate income tax bait by matching the first tranche of tax cuts for most taxpayers, while bettering them at the bottom end.

This was always an obvious tactic available to the opposition, and it was canvassing that response even before seeing the numbers in the budget. Shadow treasurer Chris Bowen and Finance spokesman Jim Chalmers announced Labor’s position as Josh Frydenberg rose to deliver his budget speech. 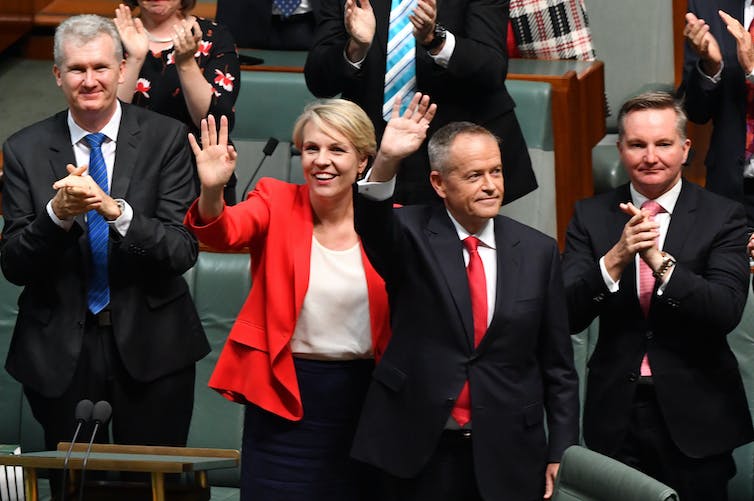 Labor did not want a fight over the tax rebate the budget promised. AAP/Mick Tsikas

Labor did not want a fight over the tax rebate the budget promised taxpayers would receive when they put in their returns soon.

And by throwing in just over $1 billion for the low paid, it boosted its “fairness” bag of goods. This complements Labor’s other policies for these people, including its commitment to a “living wage” and the restoration of penalty rates.

Shorten has rejected the further tax cut tranches the government proposes for 2022-23 and 2024-25. The cost of those is about $143 billion of the government’s $158 billion package.

The risk for Labor in dismissing them is smaller than might appear at first glance.

Tax cuts promised for well into the future are likely to be viewed sceptically by the public. Although people want governments to have long term “plans”, they’re also aware nothing lasts in politics. And in the final tranche, the benefits are very skewed to the wealthy.

The budget’s tax cuts haven’t been legislated so Labor doesn’t even have to say it will repeal something set in legal stone (although it is committed to repealing the later stages of the 2018 tax cuts).

Devoid of nasties and containing tax relief while promising a $7.1 billion surplus in 2019-20, the budget might be tracking reasonably in the community.

But given the government’s circumstances, it had to seize and hold people’s attention. Tuesday’s effort didn’t seem to have the required horse power for such a heavy task.

Many voters have stopped listening to the government. A lot of hostility is now locked in, reinforced by the general disillusionment with politics. There is a feeling that people are just looking to move on from “this lot”.

As one Liberal – who praised the budget – put it, “the die is probably cast, in terms of trust and disunity”.

After two terms of chaos and infighting, a benign budget is not going to work a miracle.

Moreover, its content had been so widely foreshadowed that it had not even a small element of surprise.

One has to wonder about the political sense in the government dropping out so much ahead of the night.

This wasn’t even a case of getting bad news behind it. The government was pre-releasing the good stuff, including funding for regional projects.

Local factors are important in elections, and that’s where the budget’s infrastructure promises come in.

These initiatives, many directed to marginal Coalition seats, might help shore up some electorates. But whether that is enough to counter any strong anti-government swing in the pipeline is another matter. And besides, Labor, flush with money, has plenty of its own local promises.

All this is not to overlook that Shorten faces increasing challenges in the next few weeks as he confronts a desperate government that won’t follow the Malcolm Turnbull path of eschewing a heavily negative campaign.

Then there are the specific scares (in Coalition terminology) around Labor’s “retirement tax” and, with this week’s release of the climate policy, its “carbon tax”, as well as the crackdown on negative gearing.

Often scares work, and indeed the polls might tighten, as they usually do at the business end of the cycle.

But sometimes tried and trusted methods fail. John Howard knew handouts worked – until in 2007 they didn’t. It all depends on the mood of the electorate.

At the moment that mood seems as dark as Scott Morrison’s “back in the black” budget week portrait. That, incidentally, turned out to be a rip off of a campaign some years ago by then New Zealand Prime Minister John Key. Just as the 2019 tax splash reprised the Coalition’s 2007 pre-election promised one, which Labor mostly matched.

Read more: Grab your tickets to our live election events