It is not unusual for Fiji to intimidate and imprison journalists.

Journalists provide checks on government, parliament and business, which threatens the country’s authoritarian politics and the limited democracy its Constitution imagines.

What is unusual is Prime Minister Voreqe Bainimarama’s decisive intervention in favour of three New Zealand journalists, who were arrested last week as they investigated environmental degradation by a Chinese property developer building a new resort.

Since the journalists’ release, Fiji’s Department of Environment has revoked the project’s approval.

Bainimarama insisted that there was no criminal inquiry in respect of the journalists and that they should be released. But it shouldn’t be assumed that he was declaring a new-found interest in freedom of the press. Nor should one accept the police commissioner’s assurance that the journalists were arrested by “a small group of rogue officers”.

It is more likely that they just didn’t understand why the usual restrictions on press freedoms didn’t apply in this case. As Bainimarama told parliament the following day:

It should be made clear: the news media has been an ally in accountability, helping to expose the [property development] company’s illegal environmental destruction.

Diplomatic sensitivities and Bainimarama’s genuine and long-held concern for environmental protection are at play in the apology that, according to New Zealand Foreign Minister Winston Peters, “seems” genuine. 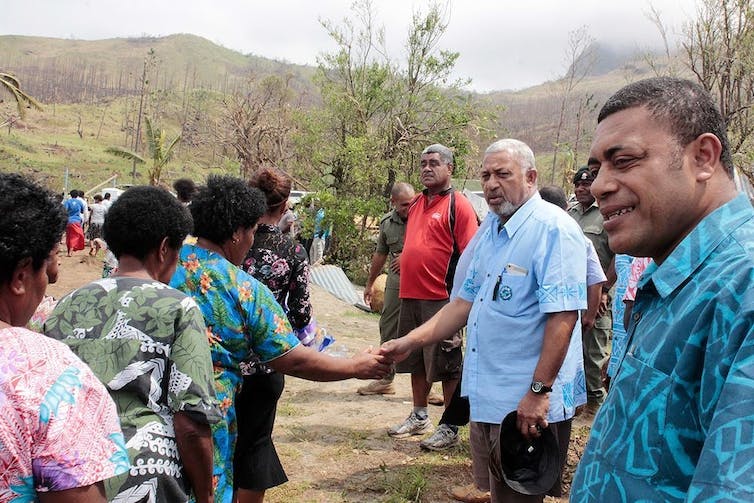 Bainimarama took power by military force in 2006. Under international pressure to restore democratic government, elections were held in 2014 and 2018 under a Constitution Bainimarama approved after rejecting a proposal drafted by an expert international panel in 2013.

On Tuesday last week – the day before the New Zealanders’ arrests - the Fiji Parliamentary Reporters’ Handbook was published in Suva. The handbook, launched in the presence of New Zealand’s deputy high commissioner and prepared with the support of Australian Aid and the UN Development Program, contextualised and affirmed the constitutional impediment to a free press.

There is scope in the Constitution to:

limit … the rights and freedoms [of the press] … in the interests of national security, public safety, public order, public morality, public health or the orderly conduct of elections.

Japan was also present at the launch. Like New Zealand and Australia, Japan is interested in promoting democracy and fundamental human freedoms, but also determined to restrict China’s growing influence in the region. Diplomacy requires complex compromise.

Read more: Huawei or the highway? The rising costs of New Zealand's relationship with China

… plays a critical role in society, providing crucial information that educates, enlightens and enriches the public to help inform the civil discourse crucial to a successful society.

The New Zealand journalists were arrested the following day.

New Zealand’s “Pacific reset” foreign policy makes it an ally to Fiji in climate change policy. In other respects, the relationship is not so strong.

Read more: Here's how to reset New Zealand’s cultural diplomacy in the Pacific

New Zealand, like Australia, had demanded Fiji’s suspension from the Commonwealth and the Pacific Islands’ Forum in 2009, three years after Bainimarama’s coup. Fiji has been re-admitted to both. International observers concluded that its general election in 2018 was transparent and credible. While elections are essential, Fiji shows that they are not all a functioning democracy requires.

Fiji’s regional isolation encouraged its “Look North” foreign policy. Its relationships with China and Russia developed. Russia has provided Fiji with military equipment in return for its support at the UN on its disputes with Georgia and Ukraine. From New Zealand’s perspective, these disputes posed a risk to international security.

But it is on China that the Fijian economy depends heavily and whose influence most concerns Australia and New Zealand. The Pacific reset policy addresses this concern explicitly:

The Pacific’s strategic environment is becoming increasingly contested and complicated, and New Zealand’s relative influence in the region is consequently declining.

New Zealand’s relative influence in Fiji is low in part because because it insists on “transparent, accountable, inclusive and democratic government systems” across the region. These features of democratic government enable coherent environmental policy, which is where Fiji and New Zealand recognise scope for significant cooperation. Climate change and disaster risk management are Pacific reset priorities.

We seek to assist Pacific Island countries in achieving effective global action on climate change and in adapting to and mitigating its effects … New Zealand has an influential role to play in leading debate about appropriate policy responses.

Fiji is a small state, with great strategic significance in the Pacific. The New Zealand journalists’ prompt release on prime ministerial intervention shows why.