Depression is a common mental disorder affecting over 300 million people across the world. It’s estimated that one in ten people in Australia (10.4%) suffer from depression.

Alongside other therapies, medication is often used to treat patients with depression. About 8% of Australians are taking antidepressants for depression, anxiety and related conditions (but in this article we’re focusing on depression).

Antidepressants are powerful drugs that affect the way the neurotransmitters in our brains work, usually with the outcome of increasing the overall amount of a chemical called serotonin. Low levels of serotonin cause low mood, so increasing the availability of this transmitter improves mood.

To be in a position where you feel ready to come off antidepressants is a good thing. But it’s not necessarily an easy thing – particularly if you’ve been taking antidepressants for a long time.

There is a possibility of withdrawal symptoms, and even the chance of relapsing back into a depression. These risks can’t be removed, but they can be managed.

Depression can last for a minimum of two weeks, but will more commonly last for months or years. For some, it will be present for the duration of their lives.

Typically, those who suffer from a major depressive disorder will be taking antidepressants for many years.

Antidepressants can sometimes cause side effects such as weight gain, fatigue, sexual dysfunction and insomnia. It’s understandable that people will want to stop taking these drugs as soon as possible, or after they have felt well for a considerable time.

But this process carries risks, so it’s important to establish a plan with your doctor before proceeding.

Your body has become used to having the drugs in its system, so withdrawal can cause side effects. 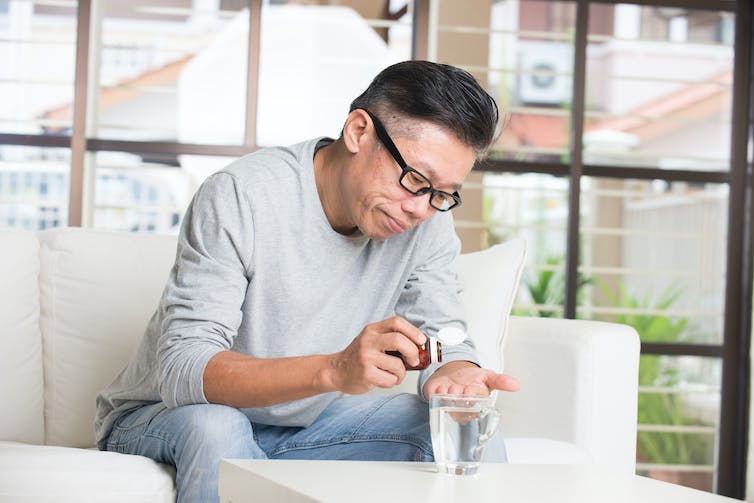 Some people will take antidepressants for many years of their life. From shutterstock.com

These symptoms may only last for a week, but could have more serious consequences if not monitored properly, such as falling back into depression. It’s important to have a withdrawal plan with your GP or prescribing doctor, so that these symptoms can be measured and medications adjusted accordingly.

Some antidepressants such as Paroxetine and Venlafaxine (selective serotonin reuptake inhibitors) are more likely to cause withdrawal, so extra care should be taken with these medicines. Other drugs like Fluoxetine can be withdrawn over a shorter period, or even act as a buffer while withdrawing from other antidepressants.

Read more: What causes depression? What we know, don’t know and suspect

Steps to take if you’re coming off antidepressants

Coming off antidepressants too quickly may increase the risk that a person will fall into a depression again and need to revert to taking medication, creating a cycle of depression.

The American Psychiatric Association and the UK National Collaborating Centre for Mental Health suggest antidepressants are taken for up to several weeks after the depression symptoms have ceased, particularly if you have been on them for many years. The key aim here is to prevent a relapse into depression.

It takes between four to eight weeks for an antidepressant to start working effectively, and it will take just as long for your body to get used to not being on them.

A general guide is to withdraw from antidepressants over around four weeks, but longer if you are on a group of drugs called monoamine oxidase inhibitors.

This process involves a gradual reduction of the amount of the drug you’re taking over time, according to the plan you and your doctor have agreed upon. Keeping track of how this is affecting your mood is helpful. 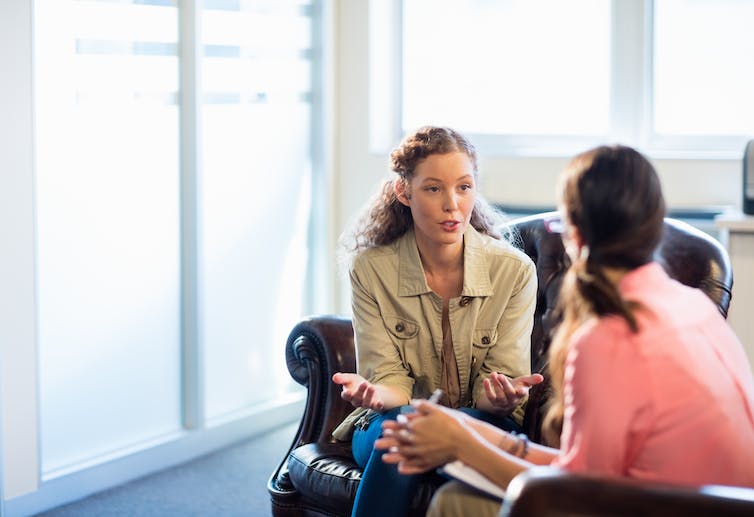 Talking therapies can be useful when going through the process of coming off antidepressants. From shutterstock.com

A systematic review found several interventions helpful when thinking about stopping antidepressants. The most effective was a form of psychological treatment called cognitive behavioural therapy (CBT).

CBT is a talking therapy that is generally provided in hour-long sessions over a period of about 16 weeks during and after the withdrawal phase.

CBT can be combined with an activity called mindfulness, a type of relaxation that helps you focus on your thoughts.

What if you do experience withdrawal?

If you find yourself suffering from the symptoms of withdrawal, returning to a lower dose of medication and slowing down the discontinuation over a longer period may be a sensible way to go.

You can also focus on some key activities known to have a positive effect upon depression. These might include forming good sleep habits, increasing the amount of exercise you do, engaging in your favourite hobbies or social activities, or adopting a healthy low carbohydrate diet.

Read more: Health Check: what makes it so hard to quit drugs?

The Black Dog Institute recommend you monitor your mood in a mood chart, which will give you a clear picture of how you’re tracking. This enables you to see the danger points when your mood falls below par, and consider when you may need to seek help.

There are many free interactive resources online which may be helpful, alongside professional medical care, as you navigate coming off antidepressants. You can also focus on positive mental health strategies that build your well-being and resilience.

If this article has raised issues for you or you’re concerned about someone you know, call Lifeline on 13 11 14.