You’d think it would be a simple piece of biological accounting – how many distinct species make up life on Earth?

But the answer may come as a bit of a shock.

We know more accurately the number of books in the US Library of Congress than we know even the order or magnitude – millions and billions and so on – of species living on our planet, wrote the Australian-born ecologist Robert May.

Current estimates for the number of species on Earth range between 5.3 million and 1 trillion.

That’s a massive degree of uncertainty. It’s like getting a bank statement that says you have between $5.30 and $1 million in your account.

So why don’t we know the answer to this fundamental question?

Part of the problem is that we cannot simply count the number of life forms. Many live in inaccessible habitats (such as the deep sea), are too small to see, are hard to find, or live inside other living things.

So, instead of counting, scientists try to estimate the total number of species by looking for patterns in biodiversity.

In the early 1980s, the American entomologist Terry Erwin famously estimated the number of species on Earth by spraying pesticides into the canopy of tropical rainforest trees in Panama. At least 1,200 species of beetle fell to the ground, of which 163 lived only on a single tree species.

Assuming that each tree species had a similar number of beetles, and given that beetles make up about 40% of insects (the largest animal group), Erwin arrived at a controversial estimate of 30 million species on Earth.

Many scientists believe the 30 million number is far too high. Later estimates arrived at figures under 10 million.

In 2011, scientists used a technique based on patterns in the number of species at each level of biological classification to arrive at a much lower prediction of about 8.7 million species. 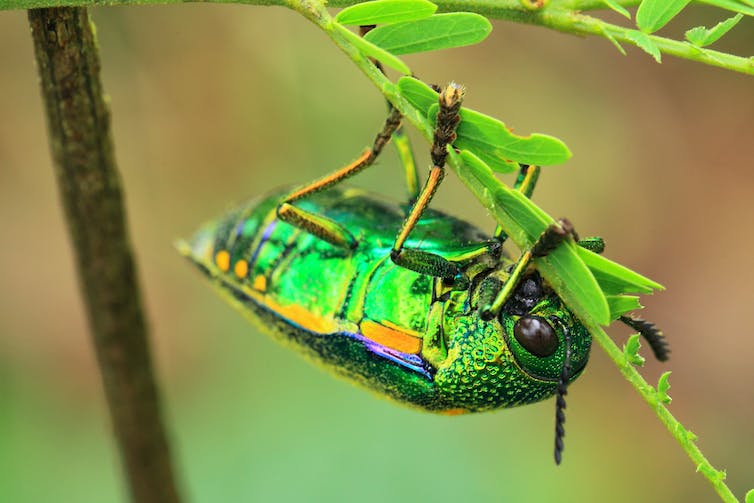 A jewel beetle, one of the more colourful species of insect alive today. Shutterstock/Suttipon Thanarakpong

But most estimates of global biodiversity overlook microorganisms such as bacteria because many of these organisms can only be identified to species level by sequencing their DNA.

As a result the true diversity of microorganisms may have been underestimated.

After compiling and analysing a database of DNA sequences from 5 million microbe species from 35,000 sites around the world, researchers concluded that there are a staggering 1 trillion species on Earth. That’s more species than the estimated number of stars in the Milky Way galaxy.

But, like previous estimates, this one relies on patterns in biodiversity, and not everyone agrees these should be applied to microorganisms.

It’s not just the microorganisms that have been overlooked in estimates of global biodiversity. We’ve also ignored the many life forms that live inside other life forms.

Most – and possibly all – insect species are the victim of at least one or more species of parasitic wasp. These lay their eggs in or on a host species (think of the movie Aliens, if the aliens had wings). Researchers suggest that the insect group containing wasps may be the largest group of animals on the planet.

A parasitic wasp finds a host for her young.

What do we mean by species?

A more fundamental problem with counting species comes down to a somewhat philosophical issue: biologists do not agree on what the term “species” actually means.

The well-known biological species concept states that two organisms belong to the same species if they can interbreed and produce fertile offspring. But since this concept relies on mating, it cannot be used to define species of asexual organisms such as many microorganisms as well as some reptiles, birds and fish.

It also ignores the fact that many living things we consider separate species can and do interbreed. For example, dogs, coyotes and wolves readily interbreed, yet are usually considered to be separate species. 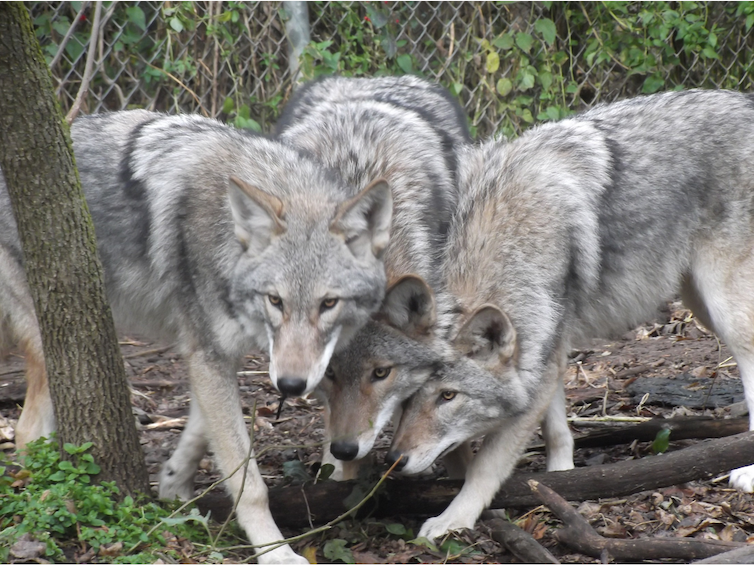 Other popular species definitions rely on how similar individuals are to one another (if it looks like a duck, it is a duck), their shared evolutionary history, or their shared ecological requirements.

Yet none of these definitions are entirely satisfactory, and none work for all life forms.

There are at least 50 different definitions of a species to choose from. Whether or not a scientist chooses to designate a newly found life form as a new species or not can come down to their philosophical stance about the nature of a species.

The cost of species loss

Our ignorance about the true biodiversity on our planet has real consequence. Each species is a potential treasure trove of solutions to problems including cures for disease, inspirations for new technologies, sources of new materials and providers of key ecosystem services.

Yet we are living in an age of mass extinction with reports of catastrophic insect declines, wide-scale depopulation of our oceans and the loss of more than 50% of wildlife within the span of a single human life.

Our current rate of biodiversity loss means we are almost certainly losing species faster than we are naming them. We are effectively burning a library without knowing the names or the contents of the books we are losing.

So while our estimate of the number of species on the planet remains frustratingly imprecise, the one thing we do know is that we have probably named and described only a tiny percentage of living things.

New species are turning up all the time, at a rate of roughly 18,000 species each year. For example, researchers in Los Angeles found 30 new species of scuttle fly living in urban parks, while researchers also in the US discovered more than 1,400 new species of bacteria living in the belly buttons of university students.

Even if we take the more conservative estimate of 8.7 million species of life on Earth, then we have only described and named about 25% of life forms on the planet. If the 1 trillion figure is correct, then we have done an abysmally poor job, with 99.99% of species still awaiting description.

It’s clear our planet is absolutely teeming with life, even if we cannot yet put a number to the multitudes. The question now is how much of that awe-inspiring diversity we choose to save.