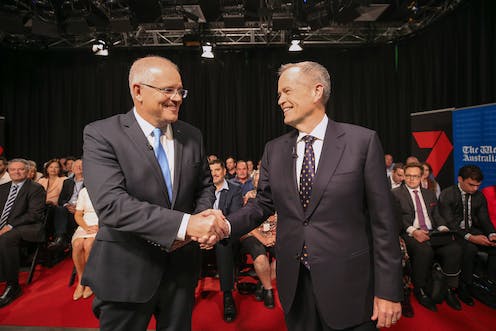 Scott Morrison and Bill Shorten were plenty snarky with one another during the debate, but otherwise stuck mainly to their scripts.Nic Ellis/AAP

Through smirks, jabs and plenty of policy disagreements, Scott Morrison and Bill Shorten took aim at one another in the first leaders’ debate of the 2019 federal election and attempted to provide...

Through smirks, jabs and plenty of policy disagreements, Scott Morrison and Bill Shorten took aim at one another in the first leaders’ debate of the 2019 federal election and attempted to provide voters with a sense of how their parties would govern if elected.

The two party leaders grilled one another on their stances on climate change, wage growth, border protection – and even the influence of Clive Palmer on the election. In one of the final questions, they were also prompted to say something nice about one another – and they both managed to find something positive to say.

Here’s what our leading academic experts made of it.

The winner of the first debate between Scott Morrison and Bill Shorten was Australian democracy.

The reason is that two unwritten democratic norms were clearly on display:

These are not to be taken for granted in an era when these two norms have broken down in the world’s most powerful democracy, the United States, and are under perilous strain in the United Kingdom over Brexit.

It is a sign that the extreme polarisation that has gripped those two polities has not so far undermined Australian mainstream politics, even though there is hate and divisiveness at the extremes.

That is not to say the leaders’ debate was without spirit. There was plenty of aggression from Morrison and a good deal of mockery of it from Shorten.

But it showed both leaders understand a truism about Australian politics. As Judith Brett puts it in her recent book From Secret Ballot to Democracy Sausage, Australian elections are won and lost in the centre.

The temperature of the leaders’ debate was moderate. Each leader stuck to his party’s perceived policy strengths: Morrison to economic management, lower taxation and border security; Shorten to climate change, health and education.

But it was hardly game-changing.

Leaving aside the fact that 110,000 people were reported to have voted on Monday when pre-polling opened, the debate was screened live at 7pm AEST on Channel 7TWO, which is channel 137 on my set-top box when I finally unearthed it.

And it was replayed, with some audience reaction, on the main Channel 7 service at 9.45pm AEST, which is not exactly prime time.

Scott Morrison won the first leaders’ debate hands down. He was clearer and more articulate on all issues, and took the debate up to the opposition leader.

On the economy, Morrison emphasised the importance of building and maintaining a strong economy in order to pay for social programs. Bill Shorten pressed his case for increased Medicare funding, his dental program for pensioners and increased wages for childcare workers.

Two exchanges stood out. When discussing the Fair Work Commission’s decision to cut certain penalty rates for some workers, Morrison said it was important to abide by the decision of the “independent umpire”. Shorten, by contrast, said he would intervene. Morrison, thinking quickly on his feet, pressed for consistency: When should a government intervene? For which workers? Why have the commission if governments interfere?

Shorten was caught flat-footed and resorted to criticising Morrison for voting against overturning the penalty-rates decision eight times – and making hand gestures to that effect.

On climate change, Morrison pressed Shorten on the cost of Labor’s 45% emissions-reduction target. Shorten was evasive, though he did point out that inaction has a cost, as well, and argued persuasively for lowest-cost abatement. However, Shorten missed an easy opportunity to criticise the government for its sharp-elbowed use of so-called “carryover credits” from the Kyoto Protocol period.

Shorten looked like a man under pressure, following the Newspoll today showing his lead narrowing to 51-49.

Morrison, by contrast, was at ease and relished the opportunity to show his command of policy detail – even the opposition’s policies. Unlike Shorten, he knew the cost of a Nissan Leaf and how many pensioners will be affected by Labor’s franking-credit policy.

Shorten stumbled over key figures, the correct name of surgical procedures he plans to fund, and smiled at odd moments – just like Hillary Clinton did in the final US Presidential debate against Donald Trump.

Labor will be hoping for a different election outcome, and a better performance from Shorten in Friday’s second debate.

Join Richard Holden for an online Q&A on Tuesday from 2-3pm AEST (30th April) to discuss the economic issues raised by the leaders’ debate. Post your questions in the comments section below.

It reminded me that Australia really should follow comparable democracies like Canada and the UK and have leaders’ debates where all the parliamentary party leaders are represented. There were issues tonight that either the Nationals’ or the Greens’ leaders should have been responding to – whether about preference deals with Pauline Hanson’s One Nation or so-called death taxes.

The content of the “debate” was extraordinarily predictable: the Coalition will provide stronger economic management and border protection and cut taxes; Labor will spend more on schools, hospitals, dental care for pensioners and childcare and do something about climate change.

Morrison said people could trust him because he delivered: as social services minister he had stopped welfare dependency; as immigration minister he had “stopped the boats”. Shorten said there needed to be institutional responses to the loss of trust, such as the federal Integrity Commission that Labor has promised.

The style was also predictable, with Morrison getting in some folksy references to cars and footy, and Shorten presenting himself as more in touch with the lives of working families, their childcare costs and lack of wages growth.

Shorten came across as the more consensual leader, saying he agreed with the government on some issues. He got a round of applause when he praised Morrison for his mental health policies. He did have some digs, though, about preference deals and Clive Palmer’s digital wallpaper being sent around Australia while still not paying his workers.

All in all, not much to see except the government relying on the words “taxes” and “boats” for a Pavlovian response and Labor emphasising its commitment to do something about inequality and the costs of maintaining tax loopholes for the wealthy.

Those who voted today probably knew this already.