Screen time has arguably become the most concerning aspect of development for modern-day parents. A 2015 poll identified children’s excessive screen time as the number one concern for parents, overtaking more traditional concerns such as obesity and not getting enough physical activity.

This is the issue explored in David Gillespie’s new book, Teen Brain. The tagline explains that the book delves into

why screens are making your teenager depressed, anxious, and prone to lifelong addictive illnesses - and how to stop it now.

This provides some idea of the emotive and provocative way the book’s content is delivered.

Given smartphones and tablets are everywhere, a message on limiting their use could not be more timely. The Australian government recently released guidelines recommending a maximum two hours per day of recreational sedentary screen time for teens.

It also recommended parents establish consistent boundaries around the duration, content and quality of such screen use.

Read more: Eight things that should be included in screen guidelines for students

However, Gillespie has missed an important opportunity to communicate this with his book. In the introduction Gillespie says he’s “made some pretty outrageous claims” but they will all be backed up by solid science. He delivers on the first part, but too often the solid science is lacking. 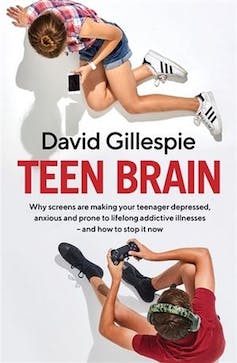 Gillespie misses a good opportunity to talk about the effects of screen time. Pan Macmillan

After what can only be described as a controversial introduction – in which puberty is referred to as a period when all “males turn into large, hairy, smelly beasts with no impulse control and a desire for danger and sex” – Gillespie attempts to explain some basics of the workings of the human brain.

But this explanation is simplified and selective, which is problematic because it is then used as a basis for many of the arguments throughout the book. And the brain, and associated human behaviour, is far more complex than Gillespie’s seeming understanding.

The second section largely focuses on teen issues intertwined with parenting tips, with reference back to the brain basics. This information is aimed at managing, and ultimately avoiding, negative outcomes in teens – such as risk-taking behaviours, addiction and adverse mental-health issues.

According to Gillespie, such consequences are largely attributable to screen-based electronic devices.

This section contains statements that aren’t referenced at all, such as:

Those that are – such as those under the heading “Teen depression and anxiety are on the rise” – often have selective references that fit the author’s narrative rather than reflecting the current state of the science.

In regards to anxiety, the book only presented parts of the research paper that it noted suggested anxiety had alarmingly tripled between 2003 and 2011. What had tripled were the presentations of anxiety symptoms. The overall diagnosis of anxiety actually remained stable.

The paper’s authors themselves state that what the results mean remains unclear. They could reflect a genuine increase in anxiety, but could also be attributed to an increased awareness by GPs or increased help-seeking behaviour of teens.

Then there are statements that are actually just plain wrong. For instance, Gillespie suggests

something else must lie at the heart of the epidemic of teen anxiety and depression, and there’s good evidence that this something is being home-delivered by the modern equivalent of a textbook - the tablet device.

Not surprisingly, this so-called “good evidence” is not provided. 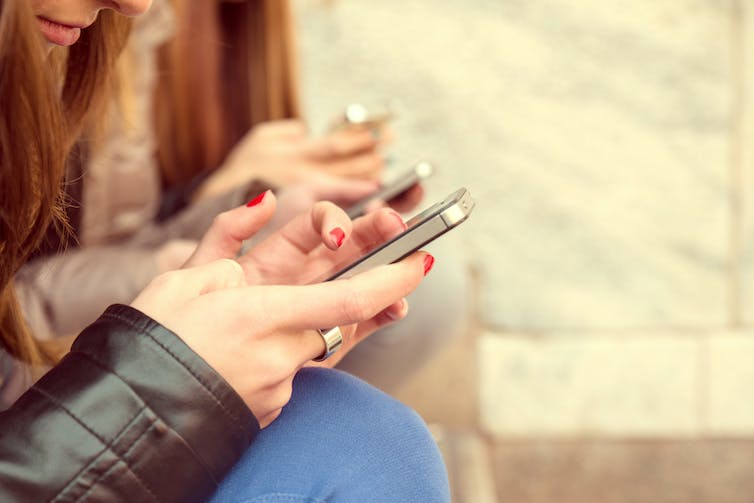 Gillespie writes that smartphones are responsible for the decline in teen pregnancies. from shutterstock.com

While it’s true there have been declines in teen pregnancy, substance use, and crime, this is not necessarily true for all countries.

For example, a recent study showed although substance use, unprotected sex, crime, and hazardous driving were reducing in US adolescents, the same trends did not apply consistently across other developed countries.

And although the study noted smartphones and social media were one possibility behind these declines, the way in which they might do this, and if in fact they actually do, is yet to be investigated.

Read more: Australian teens doing well, but some still at high risk of suicide and self-harm

Declines in risk-taking and addictive behaviours in teens can only be seen as a good thing, but Gillespie manages to use this to fit his narrative. That is, that smartphones and electronic devices are indeed responsible for these positive changes, but at a cost.

That cost is that the use of such devices is replacing these teen problems with a whole set of new ones: dramatic increases in teen anxiety, depression, self-harm and suicide. But again, this is done with the use of misleading, or completely absent, evidence.

Teenagers aren’t all the same

Gillespie presents a one-size-fits-all kind of approach throughout his book, which is also problematic, because not all teenagers are the same. There are large differences among individuals and how they are able to manage things such as anxiety, drug or alcohol use.

Genetics, as well as our environment, influence our behaviour. So what may work for one teenager, may not necessarily work for another.

The book places a large emphasis on the role hormones play in our reward pathways and addiction. One example is oxytocin. Gillespie says that “teenagers are uniquely susceptible to the power of oxytocin” and that “adolescence is a phase when the addictive power of oxytocin is magnified enormously”.

But there are substantial differences in oxytocin levels between individuals, and how each person’s system reacts to these, which the book completely ignores.

Read more: How childhood trauma changes our hormones, and thus our mental health, into adulthood

The book culminates with five key points for how parents should “harden up to save their kids”. These include parents making the rules, and breaches of the rules being punished consistently.

Gillespie also advises that “all teens need eight hours’ sleep a night”. This recommendation falls outside the amount of sleep those under 14 years old need (9-11 hours for 5-13 year olds), and only represents the bare minimum recommended for those 14 years and older (8-11 hours for those aged 14-17).

The real shame overall is that the key message, that we should limit our teens’ screen time, is actually a good one. Although research remains scarce, there are some initial reports suggesting excessive screen use may have an impact on teens’ well-being, particularly sleep, anxiety and depression.

But Gillespie has reported it all in a way that is grossly over the top and overstated, and at times incorrect or just plain offensive.

This kind of communication only serves to perpetuate fear and create anxiety – the exact things that the author claims his book will fix.