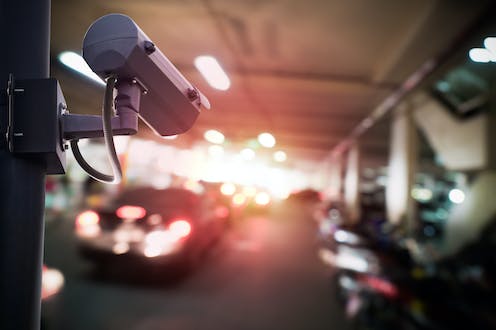 When we think of surveillance, we tend to imagine traditional surveillance tools like CCTV systems run by local authorities. The use of CCTV has certainly increased since I was a young constable on the Gold Coast in the early 1990s. From a CCTV network of 16 cameras when they were first introduced to the city precinct, the network has grown to more than 500 cameras today.

But surveillance is much more than just CCTV. It now includes things like private home or business security systems, police body-worn cameras (BWC) and the use of helicopters and drones. And we all have the capacity to conduct surveillance and gather evidence using the technology contained in our mobile phones.

These new technologies are changing the way police approach surveillance. Rather than using surveillance tools reactively to catch criminals caught in the act on camera, police are now proactively seeking out criminals in the process of offending and recording the evidence on the spot.

Read more: Turning 'big brother' surveillance into a helping hand to the homeless

Most studies show that CCTV by itself does not necessarily prevent crime, but it does assist in responding to and solving crime.

In the Boston bombing case, police used footage and images from state, public and private sources to identify the suspects. CCTV is also proving crucial in identifying the bombers who staged the recent coordinated attacks in Sri Lanka.

CCTV footage of one of the alleged bombers in Sri Lanka.

Two studies released by the Australian Institute of Criminology last month focused on the use of CCTV by police. The first showed that where police requested and used CCTV footage, there was an increase in the rate of matters being solved. The second study showed CCTV footage is highly valued by law enforcement personnel, with 90% of investigators using the footage when it was available. Two-thirds were able to use it for the reason they had requested it.

Police body worn cameras (BWCs) are an example of this. Every police service in Australia is now using BWCs. Rather than just recording a criminal event by chance, BWCs enable police to actively seek out those committing offences, and record the evidence against such offenders.

Queensland Police requires its officers to record whenever the officer is acting in the performance of his or her duties. The device must be recording prior to, and during, the exercising of a police power or applying a use of force.

This requirement can be problematic since the officer must physically start the recording. In the shooting matter of Justine Damond in the United States, officers were criticised for having their recording devices turned off during the shooting.

Some services have attempted to deal with this issue, such as Western Australia Police for instance, by having the BWC automatically begin recording when an officer draws their firearm.

Even traditional CCTV is becoming proactive with the introduction of mobile CCTV cameras that can be moved as required to areas of community concern.

Many police services are using drones for tasks such as crowd management, surveillance and target acquisition. Queensland and Victoria are just are two states that are committed to the use of drones for policing purposes. In 2017, Queensland Police had a fleet of ten drones.

Facial recognition software was once the thing of Hollywood movies like Mission Impossible. It’s now a reality, with the Council of Australian Governments (COAG) agreeing to share biometric data, such as drivers licence details and passport photos, between government agencies.

For example, Operation Nomad saw a South Australian police visiting suspected and convicted arsonists when automated number plate recognition alerted them to suspects driving in fire danger zones. The operation was credited with the reduction of bushfire related arson.

Read more: You may be sick of worrying about online privacy, but 'surveillance apathy' is also a problem

Keeping a watch on big brother

Surveillance is changing from being static, fixed and reactive to being flexible and proactive. The enhanced capabilities helps law enforcement fight crime, rather than just solve it.

The Coalition government promised A$20 million to increase the number of CCTV cameras across the country. Under the proposal, up to 2,600 cameras would be installed at 500 “crime hot spots”.