Sunny interludes punctuate showers of rain, hail and sleet as furious winds sweep clouds across the sky. It’s a typical summer day on Macquarie Island, a sliver of ocean floor that rose more than 2.5 km from the depths of the Southern Ocean, halfway between Tasmania and Antarctica, around 12 million years ago.

On this February day in 2013, my colleague Jennie Whinam and I are visiting monitoring sites for the critically endangered Macquarie Island cushion plant, Azorella macquariensis, which has been suffering extensive dieback.

It is a short walk from our cosy field hut to Skua Lake on the opposite side of the island – a mere four kilometres of steep off-track walking, head-first into the icy wind.

We make a small detour to the shoreline of Skua Lake, the only known location for perhaps the rarest plant on the island, the subantarctic bedstraw (Galium antarcticum). This small herb had not been seen since it was first recorded on Macquarie Island in the early 1980s, despite several searches in the subsequent 30 years. 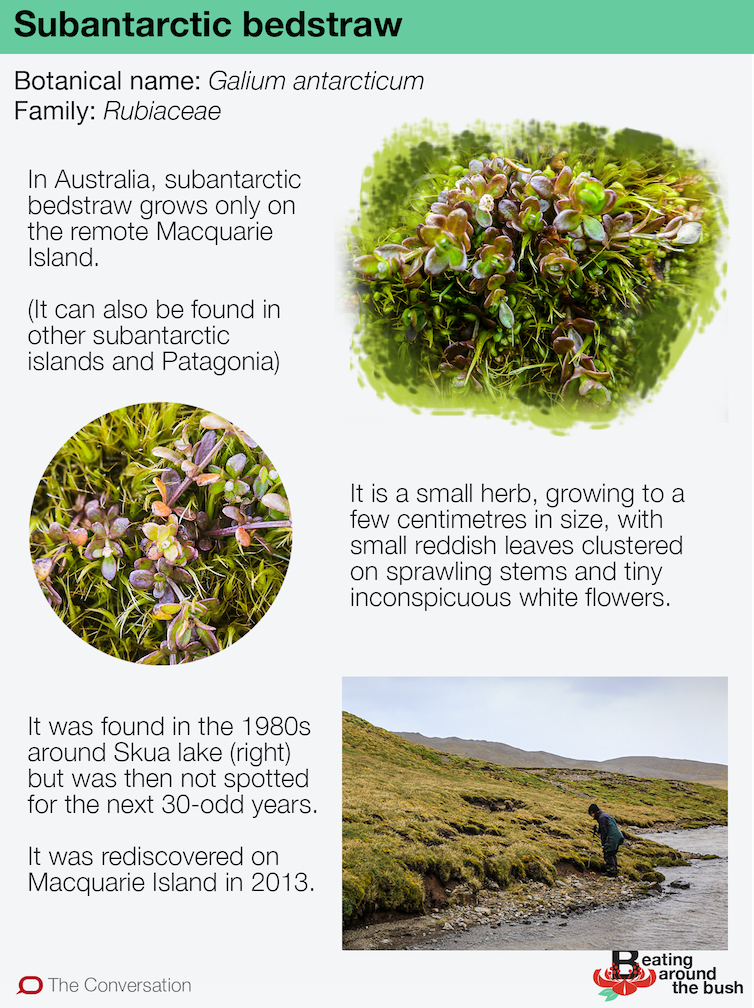 The Conversation It seemed likely the humble bedstraw was extinct on Macquarie Island, and we weren’t confident we’d see one that day. It is a small herb, growing to a few centimetres in size, with reddish leaves clustered on sprawling stems and tiny inconspicuous white flowers. Not the easiest plant to spot amongst the lush growth of a subantarctic meadow. But within five minutes of arriving at the shoreline of Skua Lake, we spotted a reddish-coloured herb unlike any other plant there, partly hidden among dense mosses and grasses. Excitedly, we set about searching for others, finding hundreds of the tiny plants! But our celebratory feeling was soon blown away by a flurry of horizontal snow carried across the lake. Skua Lake is perched on the top of an escarpment 130 metres above the ocean with no shelter from the winds that travel unimpeded around the globe at these latitudes. We were so cold we had to start moving again. And turning our backs to the wind, we marched across grassy hills dusted with fresh snow. 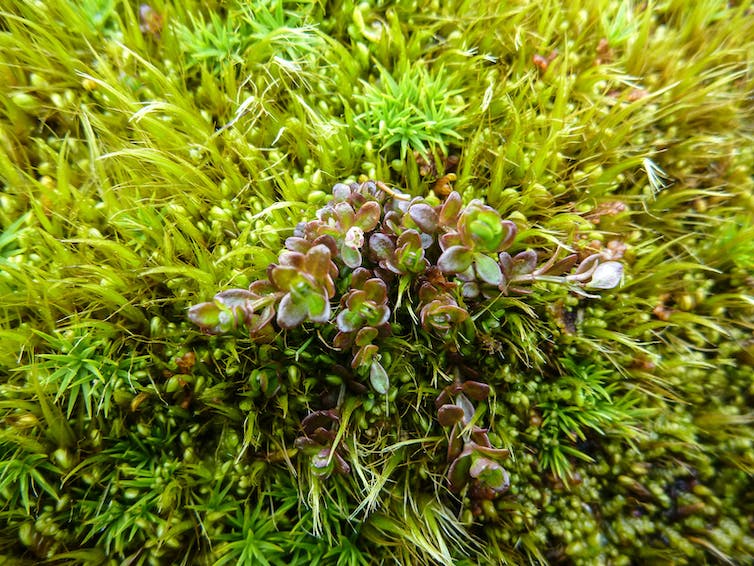 Subantarctic bedstraw (Galium antarcticum) Author provided (No reuse) Hidden for three decades Our rediscovery of this critically endangered species raised a couple of questions. Where had it been hiding for 30 years? And, given the abundance of apparently suitable habitat on the island, why was it restricted to one location? These questions remain unanswered. But four years later, in 2017, botanists Cath Dickson and Alex Fergus stumbled upon a second population of subantarctic bedstraw on the opposite side of Skua Lake, comprising an estimated 1,000 plants. But why it is not even more widespread remains a mystery. Perhaps the bedstraw was preferentially grazed by invasive rabbits, which have had a dramatic impact on the vegetation of Macquarie Island. Or, the plant could be a recent immigrant to the island yet to expand its range. Galium is a large and widespread genus of herbs (commonly called bedstraw) in the Rubiaceae family, with several native and introduced species in Australia including the familiar garden weed cleavers or sticky weed. Many species have distinctive bristly hairs, whereas G. antarcticum is hairless. With a total known population of 1,500 plants confined to a few square metres of windswept tundra, Galium antarcticum remains critically endangered in Australia. 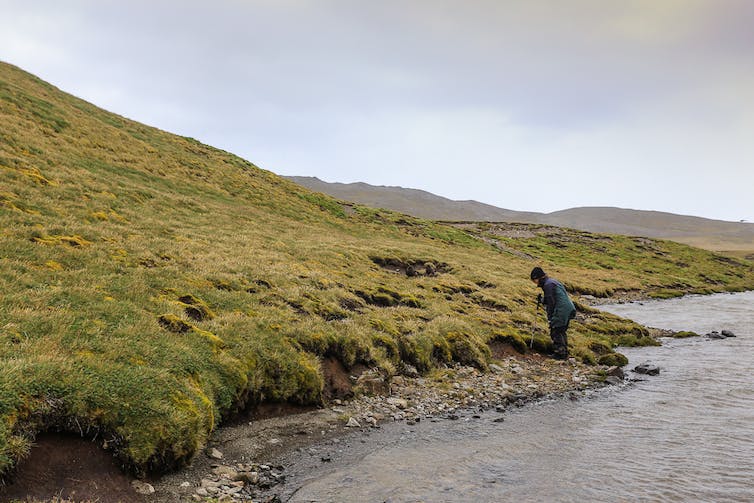 The Skua Lake habitat for subantarctic bedstraw. Author provided (No reuse) Travelled across vast seas Macquarie Island is a young and very remote landmass with an unusual cold maritime climate. Its flora was born from long-distance dispersal and largely composed of subantarctic specialists. Subantarctic bedstraw is one such specialist, and is also found in Patagonia, South Georgia, the Falklands, Crozet and Kerguelen islands. This wide distribution throughout most of the Subantarctic, including islands separated by thousands of kilometres of ocean, suggests this species has been dispersed by seabirds. The future prospects for the species on Macquarie Island are uncertain. It may benefit from the recent eradication of rabbits, expanding its range, or it may struggle to compete with taller growing plants as the short grassland transitions to a more closed vegetation community in the absence of grazing pressure. Or it may continue to be a mystery.