Set in a rambling and ageing house haunted by a colonial past, Cloudstreet is a theatrical adaption of Tim Winton’s 1991 novel of the same title.

Written by Nick Enright and Justin Monjo – and first performed in 1998, now directed by Matthew Lutton – the play is a faithful rendering of Winton’s modern literary epic. It follows the lives of two working-class families, the Lambs and the Pickles, as they attempt to eke out a living in the wake of the depression, while contending with a series of personal tragedies and triumphs.

The play roughly covers the period between the late 1940s to the 1960s, as the Pickles and Lamb children move into adulthood. Themes of death and rebirth abound. The house on Cloudstreet is restless – it heaves, sighs, and curses while Perth’s Swan River whispers the story of a submerged past.

Cloudstreet begins with a narrator figure (played by Noongar actor Ian Michael) who tells the house’s backstory. As in the novel, number one Cloudstreet was once a mission for young Indigenous girls, who were used as indentured servants by a land-owning woman and self-proclaimed paragon of Christian virtue. 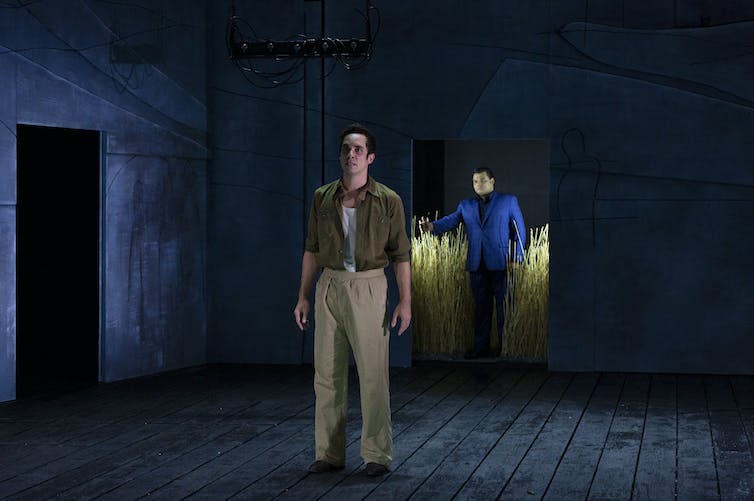 The young Indigenous captives perished in the house along with its cruel mistress. One of the mission’s girls returns as an embodied presence on the stage, at times interrupting the dramatic time of the play to offer its main characters pieces of wisdom or provide exposition on plot.

The house and its surrounds are haunted by the past: the walls and foundation are soaked with the traumatised presences of its previous occupants. The outline of two figures whom we assume are the souls of the departed are literally etched in black charcoal onto the back wall.

Yet the play is unapologetically nostalgic and tips its hat to vaudeville, with larger than life delivery of dialogue, course humour, and a strong embrace of working-class Australian vernacular. Overtones of cheery nostalgia intersect with moments of magical-horror or surrealism – these arrive in the form of theatre’s equivalent to the horror genre’s jump scare.

Matthew Lutton’s directorial hand is palpable, delivering haunting atmospherics sustained and supported by a rich, often unsettling soundscape (J. David Franzke). The set-design (Zoë Atkinson), is reminiscent of a modernist style, with the set doubling as both the outdoors and the inside of the house. The walls of the house are not static – they grind as they protrude and retract, giving the impression the audience is moving in and out of a secret crypt. 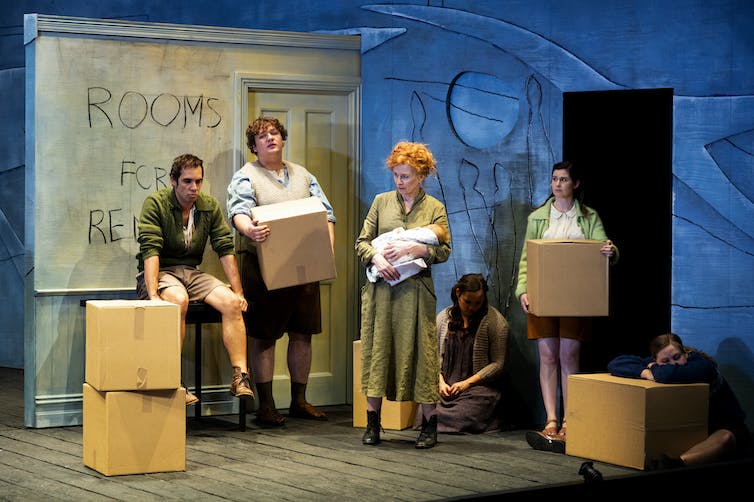 The house on Cloudstreet is haunted by its past. Pia Johnson

Dramatic action unfolds over four acts, with the first depicting the near drowning of Fish Lamb (Benjamin Oakes), who is left permanently altered. Oakes inhabits the character of Fish Lamb with aplomb, drawing out the role’s subtleties and enthusiasm.

In the second and third act, the Lambs and Pickles converge at the house on Cloudstreet, an eyesore bequeathed to Sam Pickles by a publican relative. They are polar opposites: Oriel Lamb’s (Alison Whyte) industriousness sees the Lambs opening up shop on their side of the house, a hive of entrepreneurial activity, while Dolly Pickles drinks, smokes and languishes on the other side. 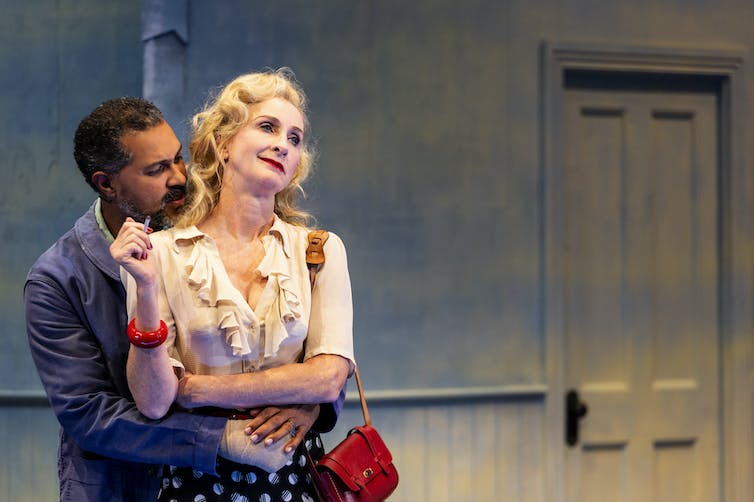 Bert LaBonté as Sam Pickles and Natasha Herbert as Dolly Pickles in Cloudstreet. The Pickles and the Lambs are polar opposites. Pia Johnson

The actors deliver nuanced performances despite the demands placed upon vocal style and delivery when playing to the Merlyn Theatre’s large auditorium. Their performances are energetic, with members of the ensemble cast shifting convincingly across multiple small roles for the duration of the play.

In the third and fourth act, a serial killer stalks the town and its unwitting inhabitants, leaving a swathe of dead in his wake. The terror of the unknown gunman merges with the supernatural horror embedded in the history-soaked mortar of the house; while the perilous water of the Swan River beckons Fish Lamb to return to it.

Fish’s near drowning left him open to fits of revelry and panic; he hears the calls of the dead from Cloudstreet’s walls; and longs to return to his watery grave in which a subterranean landscape of sky and stars unfold. 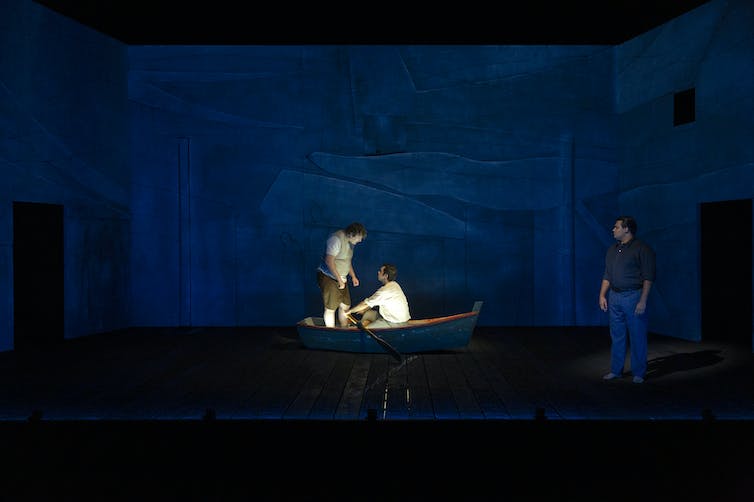 The play’s stunning final image is elemental and cathartic, promising to wash away the colonial hauntings of the past, which leaves us to contemplate our own position in an Australian landscape beset by a continuing history of settler colonial violence.

However, relegating Indigenous presence to the margins of plot or to the ghostly realm is a major sticking point in Cloudstreet and has been critiqued before. This narrative device is advanced in both the novel and its theatrical adaptation. The Indigenous characters in the play remain spectral and/or peripheral – artificially grafted to the lives of the Lambs and Pickles as counterpoint.

While diverse casting in the new production attempts to mitigate this literary settler trope, it would require a deeper intervention in the writing itself to fully succeed. Pathos blends with humour to produce a visually arresting production, by turns raucous and tragic, but its nostalgia dovetails all too easily with a redemptive vision of Australia’s past.

Cloudstreet is on at the Malthouse Theatre, Melbourne until June 16.