The policy includes a commitment to restore funding taken by the Coalition from the Australia Council, starting with A$37.5 million. There are funding boosts for the ABC and SBS of $40 million and $20 million respectively for production of Australian content, and new funding for contemporary music and interactive game development.

The agenda also includes $8 million for the establishment of a new national Indigenous Theatre Company, as well as a commitment to embedding better arts education across schools. Overall, Labor, in a modest fashion, tries to address some of the major issues affecting the arts in Australia.

However it does not come close to the Canadian Government’s 2016 dramatic scene changer, which pledged an increase of CAD$1.9 billion (approximately $A2 billion) to the cultural sector, including an extra CAD$550 million in for the Canada Council for the Arts and CAD$675 million for the Canadian Broadcasting Corporation. Action on this scale here would be transformative. 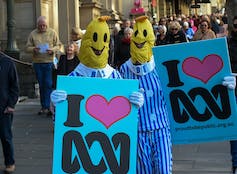 A Friends of the ABC rally in Melbourne in 2018. Labor’s new arts policy includes a funding boost to the ABC for Australian content. Penny Stephens/AAP

Meanwhile, the Coalition has barely mentioned the arts during this campaign, nor is there any evidence of an arts policy on the Liberal Party website.

In relation to new programs though, it recommended in the most recent budget a $30.9 million music industry package, for funding of live music and mentoring programs for female and Indigenous musicians.

Read more: Arts and culture under the Coalition: a lurch between aggression and apathy

The importance of the arts

Nevertheless, the funding of arts and culture in this country reflects a political climate that does not take culture, or the arts practices it spawns, seriously. While a 2017 survey reinforced that 98% of the community engage with the arts, there is little acknowledgement or respect paid to artists and cultural producers at the political level.

In its 2018 budget the federal government predicted an overall expenditure of $488.58 billion. Within this total, $1.3 billion - a little more than a quarter of 1% - was allocated to arts and cultural heritage.

Many nations spend a great deal more as a percentage of their budget, including nations far poorer or smaller in population than ours.

The Australia Council had $189.3 million in 2017-2018 to spend on the funding of arts activities. Around 59% of this total (or $111 million) went to support 28 major performing arts organisations, all included in the Major Performing Arts Framework.

Over the past year the Australia Council has been reviewing this framework and consulting with the broader arts sector in relation to its review. In a summary of the second phase of consultation published last month the council noted there was “little diversity” among this group of major performing arts organisations with only one Indigenous company (Bangarra Dance Theatre) included. 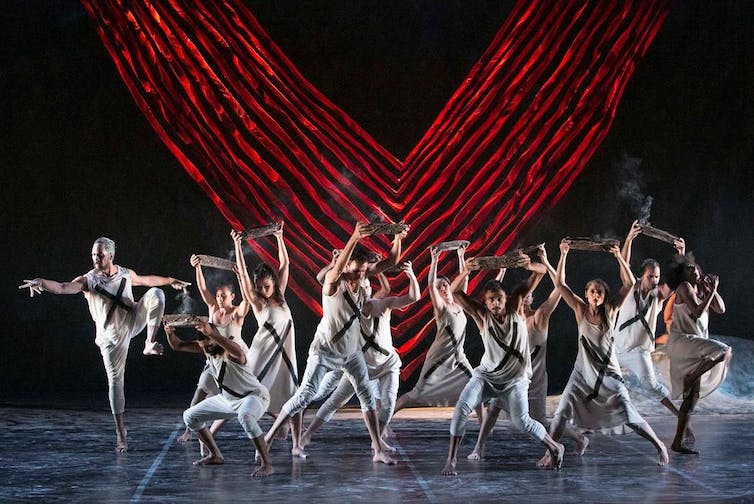 Over 600 other arts organisations and individuals received the rest of the federal arts funding. They have strict limitations imposed on them in terms of accountability, performance, output and the amount of funding they can receive. These conditions are designed to ensure they do what they say they will - but they also limit what they might be capable of doing.

In contrast, organisations that come under the Major Performing Arts Framework are primarily subject to financial criteria. Even when they do not conform to the expected financial conditions (as recorded in the National Opera Review in 2016, they can continue to be funded.

The Labor Party says it expects the additional funds for the Australia Council “will help restore the balance for areas that have been underfunded in recent years, including, literature, visual art and the small, medium and independent sectors.” It wants to see the Major Performing Arts Framework deliver a clear purpose and fairer funding arrangements and reflect the broader community’s diversity.

There is an intention flagged here that Labor will review the current arrangements to make them more accountable and reflective of diversity. The challenge though is always equating size with quality. Academic researchers Ben Eltham and Deb Verhoeven have demonstrated that most artistic innovation occurs in arts activities outside of the major funded organisations.

Inequities exist in the arts because of class, education, gender, race and ethnicity. Nevertheless, only relatively recently has there been recognition that citizens should have “cultural” as much as political or social rights, with the passing of the UNESCO Convention on the Protection and Promotion of the Diversity of Cultural Expression in 2005.

While Australia has been party to the Convention since 2009, actual policies to ensure our compliance are limited. For example, Australia does not have a Bill of Rights ensuring freedom of expression or cultural rights.

The idea of cultural rights includes the notion that all citizens should have access to and be able to participate in various forms of artistic and cultural practice. If Australia had constitutional recognition of cultural rights, would there then be an imperative to fund the arts appropriately to reflect the cultures and population distributions that exist?

Australia is home to the oldest living continuing culture on this earth - a unique privilege for us all. Recognition, respect and valuing of culture and the arts are part of the remit of a sophisticated and caring nation. It is time that our political masters demonstrated that they understand that arts and culture matter to everyone.