In recent days, North Korea has upped the ante in its standoff with the United States and South Korea, further highlighting the missed opportunity at February’s Hanoi summit aimed at bringing peace to the Korean peninsula.

Reports last Thursday suggest that a “projectile” was launched from the Sino-ri test site on North Korea’s west coast, flying approximately 420 kilometres. A flight path of this distance would suggest the projectile was a Hwasong-6 short-range ballistic missile (SRBM), which the North has possessed for some time.

On May 4, North Korea tested a new missile that appeared to be a version of the Russian-made Iskander SRBM. According to 38 North, a North Korea analysis website, the strategic significance of the Iskander missile is its in-flight manoeuvrability and relatively low flight altitude, which allows it to evade most missile defence systems. With a range of approximately 280 kilometres, the Iskander missile is clearly intended for targets in South Korea.

The latest missile tests are a predictable reaction by the Kim regime to its diplomatic impasse with the United States. Tiny escalations are North Korea’s stock-in-trade response in situations where it is trying to extract concessions in an unfavourable negotiating dynamic.

How the White House responds from here is an open question. Every time North Korea needles the US with another provocation, it represents a loss of face for Trump and makes it harder for him to mobilise the domestic support in the US for a return to the negotiating table.

A familiar strategy from Kim Jong-un

The Iskander short-range missile is new to North Korea’s missile arsenal and demonstrates the damage the North could do to South Korea in a war scenario – a veiled threat that is classic North Korean strategic signalling.

The tests were conducted on the heels of Kim Jong-un’s speech to the North Korean Supreme People’s Assembly on April 12, in which he indicated he will only wait until the end of the year for the US to change its diplomatic approach and return to negotiations for a peace agreement.

If we get to 2020 without any substantive change in the Trump administration’s approach to North Korea, a reversion to North Korea’s belligerent behaviour of the past is likely: more nuclear tests, more long-range, inter-continental ballistic missile (ICBM) tests, ramping up production of fissile material and increasing its nuclear weapons arsenal.

This can be predicted with reasonable confidence, as Kim does not have many other options if he wants to move forward with his economic modernisation agenda.

In short, Kim will likely put a capital ‘N’ and ‘P’ on “nuclear proliferation” if he sees the door slamming shut on the summit process with Trump.

Trump boxed himself in at Hanoi

The US responded to Pyongyang’s latest missile launches late last week by suspending the program to repatriate America’s war dead from North Korea. However, US President Donald Trump tried to downplay the tests by saying he didn’t consider it a breach of trust.

With his all-or-nothing grand bargain gambit in Hanoi, Trump trapped himself in a box. He has expressed a strong personal desire to secure an agreement with Kim. But if he still wants a deal, he is going to work around their irreconcilable positions on the meaning of denuclearisation.

What this means is either Trump or Kim will have to blink. At this point, only one of them has room to compromise. Kim cannot afford to dramatically change tack and relinquish his nuclear program, as, from his perspective, the security and the legitimacy of his regime depends on its possession of “the bomb”.

As a result, the US will inevitably have to make the bulk of the concessions if this process is to move forward. The US is also in the better position to make concessions because of its overwhelming nuclear superiority, its effective deterrence posture and its status as a global power that is not existentially threatened in the same way that North Korea is.

Previous US administrations have been unwilling to shoulder this burden. Trump has. But every time North Korea tests a missile, it will further undermine Trump’s ability to cut a deal.

Read more: Why North Korean prosperity would be the ruin of Kim Jong Un

Competing voices within the White House are another complication. Hardliners like National Security Adviser John Bolton are arguing for a “maximum pressure” stance against Pyongyang, to squeeze North Korea until Kim makes concessions. To them, any deal with North Korea would represent a sell-out of US interests. North Korea criticised Bolton, in particular, for being a potential spoiler in the negotiations in Hanoi. 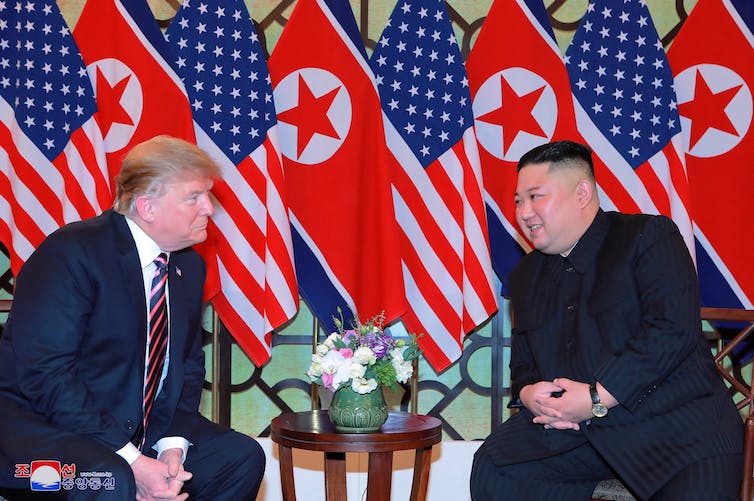 Just three months ago, Kim Jong-Un and Donald Trump seemed to mark another breakthrough in Hanoi. Then came a lull in negotiations. KCNA/EPA

If negotiations break down, is conflict inevitable?

The latest tensions have left South Korean leader Moon Jae-in scrambling to save the peace process. His government is urging the US to stay the course on engagement with the North, in spite of the recent missile provocations.

Moon has spent enormous political capital trying to reconcile with the North and bring lasting peace and security to the Korean peninsula. And the Blue House is well aware that the carefully constructed summit agreements of 2018 are teetering on the brink of collapse. There is no fortuitously timed Winter Olympics to provide a circuit-breaker to prevent tensions from escalating, either.

We have been here before. When tensions last reached a crescendo between the US and North Korea in 2017, threats of war from Washington were successful in cracking open the window for new possibilities.

After the unprecedented diplomatic activity of the last year, however, this strategy would not work again. If the US pursues “maximum pressure” against North Korea now, there is nowhere left to go besides conflict.