The 58th Venice Biennale of Art opened last weekend, the world’s first and still largest biennale exhibition in a field that now numbers over 100 major events internationally. It is often referred to as the Olympic Games of art, a comparison grounded both in its establishment and repute.

While the selection of artists for Venice is a much more subjective process than the selection of athletes for the Olympics, both see each nation put forward its “best” practitioners for a once-in-a-lifetime event that is anticipated worldwide and watched by millions.

When it began in 1895, the Venice Biennale aimed to reestablish the city as a fixture on the Grand Tour by drawing visitors away from the foul-smelling canals around San Marco to the Gardens to the east of city. With the Salon exhibition in Paris becoming increasingly conservative and less fashionable by the 1890s, it was also an opportunistic moment for Venice to reclaim its artistic renown in Europe.

This year the international exhibition is curated by New York native, London-based curator and Hayward Gallery director Ralph Rugoff and contains the work of 79 artists. However it is the national pavilions, of which there are 92 this year, that make up the majority of the Biennale in terms of real estate, volume and public interest.

The pavilions require each of the participating countries to assume curatorial, production and funding responsibility for their exhibition, which typically feature just one or a small number artists’ work. In addition to its long history and colossal scale, it is this national pavilion format that distinguishes the Venice Biennale from the scores of biennales elsewhere. 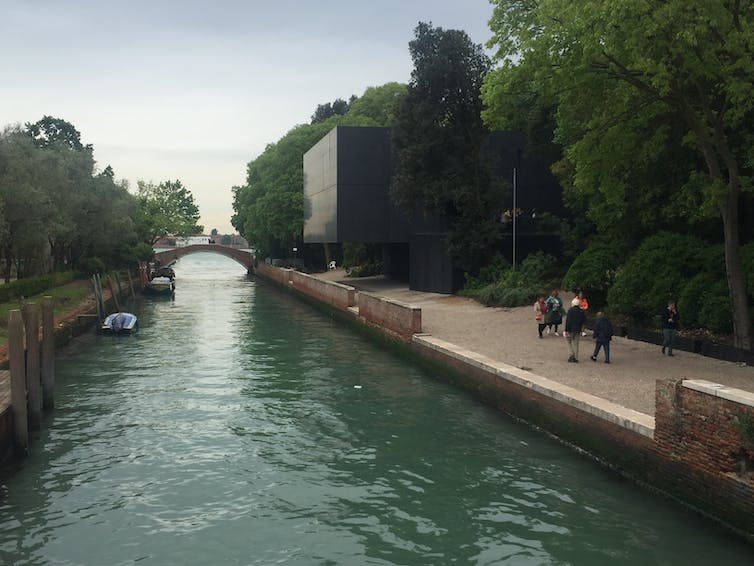 The Australian Pavilion at the Venice Biennale. Felicity Fenner

In times of global conflict, the Venice Biennale, like the Olympics, offers an opportunity for nations to come together in a spirit of shared participation and dialogue. Unfortunately, however, the national pavilion model discourages cross-cultural dialogue, instead fostering a separatist mentality that inevitably results in competition between nations. (Indeed, the most sought after prize at the Venice Biennale is the Golden Lion Award for the Best National Pavilion, won this year by Lithuania.)

The international art world’s glamorous graveyard to national cultural identity, the Biennale Gardens are an anomaly in our globalised 21st century. The perpetuation of this Victorian era perspective of the world is in part due to architecture: within the Gardens, the historic centre of the exhibition, 30 nations each have a discrete gallery (“pavilion”) to house their biennial art exhibition. 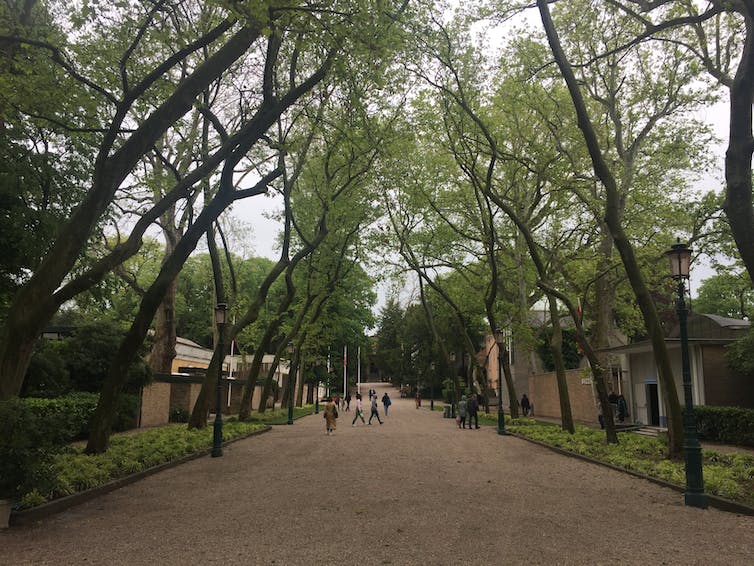 The Giardini at the Venice Biennale. Felicity Fenner

When the Gardens were deemed fully occupied a generation ago, countries seeking to exhibit at the Biennale commandeered spaces in the event’s second venue, the sprawling Arsenale complex of former shipyards, or rented spaces in deconsecrated churches and palazzi across the city. 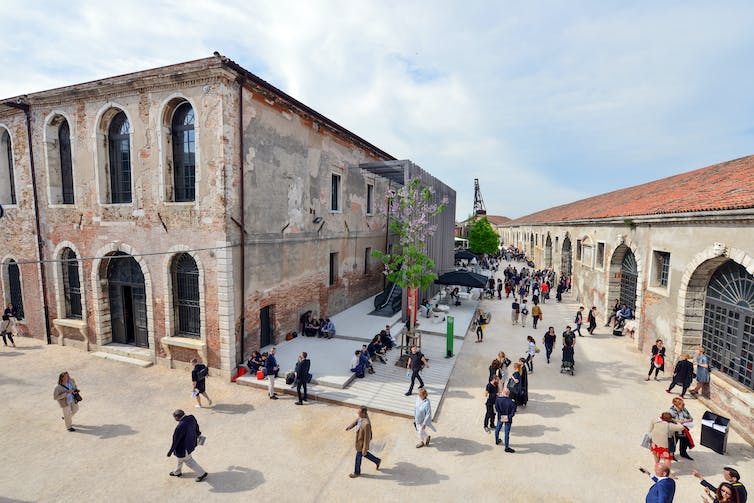 Australia was one of the last nations to be granted a plot in the Biennale Gardens, in 1988. Since then, a succession of mostly one-person Australian pavilion exhibitions have demonstrated the international calibre of Australian art, or have attempted to convey a sense of Australian culture, or both.

The cultural background of this year’s representative, Angelica Mesiti, typifies that of many international contemporary artists today. She is of Italian heritage, lives in Paris and makes work across the world, most recently in Aarhus, Denmark for her piece in last year’s Adelaide Biennial, and in Rome and Canberra for her current Venice Biennale work. 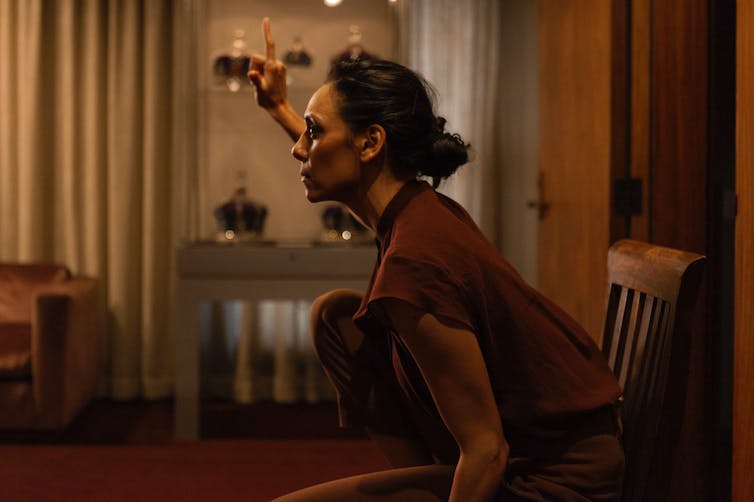 Mesiti is exhibiting an immersive video installation on the subject of democracy, a fitting subject given the state of global politics today and the promise of the Venice Biennale as a forum for open dialogue. Filmed inside the senate chambers of both countries, “Assembly” is viewed from inside an amphitheatre constructed within the pavilion. The audience looks across to each of the three screens in an architectural design that in its circularity and red palette evokes a legislative assembly. 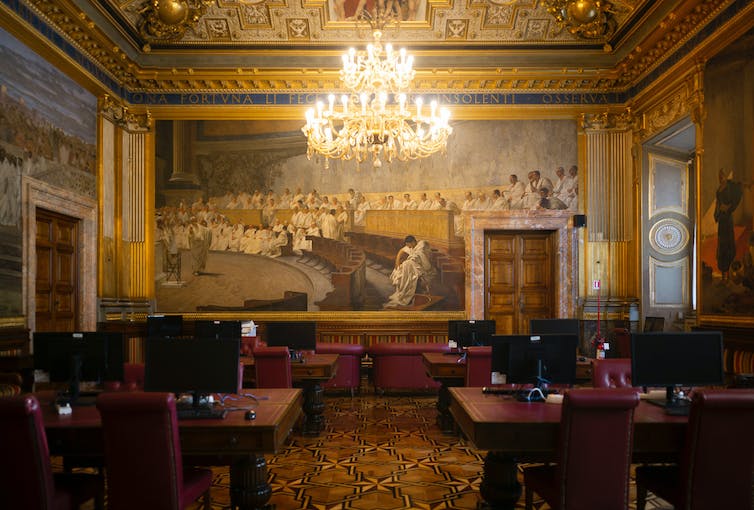 In deploying the pavilion as a conversation pit, Mesiti not only refers to the ties between Australia and Italy – both personal and in the setting of the Biennale – but also to the idea of a pavilion itself. Traditionally a pavilion is a place of shelter, a temporary structure offering respite on a journey or refuge from the elements.

It implies safety and sanctuary, a meaning complicated at the Venice Biennale by the word “national”, which in current times evokes “nationalism” and its associated extremism. Mesiti has created a forum for exchange within the confines of the Australian pavilion: the challenge for the Venice Biennale is to overcome the existing disconnection between national pavilions to make the event more conducive to genuine exchange.

It was noted at a symposium in Venice last week that if all the countries in the world had a pavilion in the Gardens, it would be more densely populated than Hong Kong. Given that the world’s population has more than quadrupled since the Biennale began, it makes sense to invite all the world’s countries into the Biennale Gardens. A densely populated community of shared pavilions would better reflect modern times, while also offering the potential for collaboration and exchange between nations.

Like Australia’s entry, very few of the national pavilions in this year’s Biennale claim to embody the national character of their country. Venezuela is one exception: the political unrest in that country has rendered its pavilion empty, the artworks having failed to arrive. 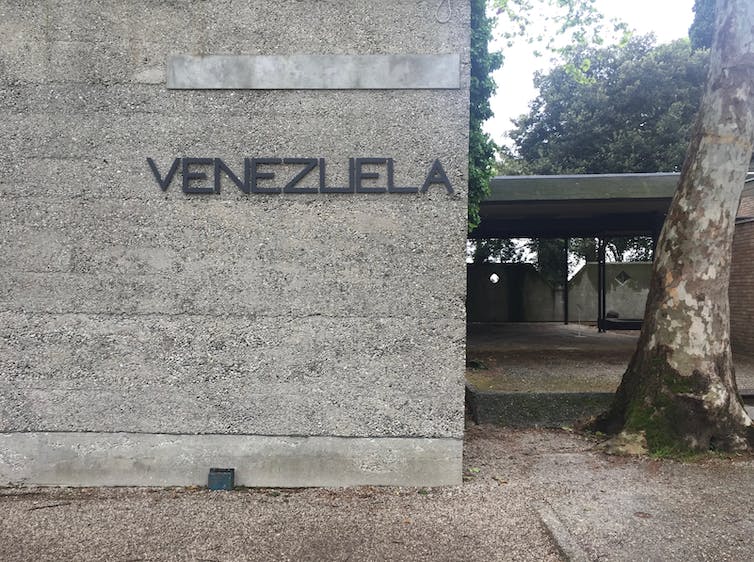 Another exception is Ghana, one of a handful of first-time pavilions at this year’s Biennale. Designed by London-based, Ghanian architect David Adjaye in a style that references African vernacular architecture in its sand-coloured walls, this unusually expansive pavilion accommodates the work of six artists across three generations. 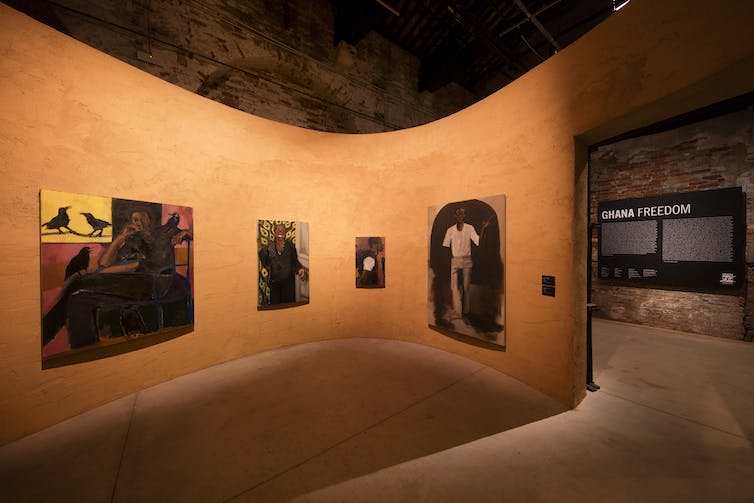 The outstanding work is filmmaker John Akomfrah’s sweeping visual narrative depicting violence in Africa over generations, including the mass slaughter of elephants, and breathtaking footage of threatened natural land and marine environments. It is a scathing indictment of human greed and malice that has global resonance.

At a time when sovereignty of international waters is contested, it can be difficult to define where nations and their concomitant responsibilities begin and end. As part of the curated international exhibition, Swiss-Icelandic artist Christoph Büchel has towed to Venice an infamous Libyan fishing vessel that in 2015 sank between Libya and Lampedusa, killing up to 1,000 migrants trapped in its hull. 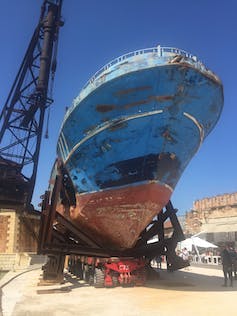 The title, “Barca Nostra (Our Boat)” refers to the Italian government’s 2013 Mare Nostrum (Our Sea) policy, instigated in response to the number of doomed migrant ships.

The sight of the rusted vessel in the Arsenale, surrounded by military and recreational watercraft on one side and by cappuccino-sipping Biennale visitors on the other, has a powerful impact on those few viewers cognisant of its story.

More than any artwork in the exhibition, by rendering visible what is generally hidden from public view, its presence encapsulates the danger, tragedy and trauma of forced migration.

It is these global issues that find shared platforms in this year’s Biennale and that make for the strongest and most relevant works – themes around political, refugee and climate crises abound. These are the new thematic “pavilions” of the 21st century.