Running from North Sydney to Manly, up to Dee Why and then inland to Forestville, Warringah is a long-held conservative seat, never having been won by Labor or independents in its 97-year history.

Yet, Abbott went into the election as something of an underdog. The key issues for Steggall, climate change and refugees, were both issues that had agitated the electors of Wentworth seven months earlier, when independent Kerryn Phelps won the seat of former Prime Minister Malcolm Turnbull at the byelection caused by his resignation from parliament.

That resignation, brought on by Home Affairs Minister Peter Dutton creating a leadership challenge that would eventually fall to Scott Morrison, had created bitter acrimony in Liberal ranks. Abbott was blamed for destabilising the party since losing the prime ministership himself in the lead up to the 2016 election.

Now the chickens were coming home to roost. Left-wing activist group GetUp! and independent campaigners helped promote Steggall as a viable conservative-leaning independent candidate. GetUp! itself was accused of using Steggall as a front for its activities.

A conservative campaign was also initiated, under the name Captain GetUp, trying to suggest that GetUp! was just a front for Labor, but this failed to spark anything more than derision among watchers of the Captain’s YouTube campaign.

While Abbott also attempted to use YouTube, his fascination in one clip of a roadside library (free, covered book boxes, designed to pass on “good reads”) simply suggested he was out-of-touch with what was going on in his electorate, and built upon the picture of a politician out of step with his voters - as had previously been seen in the same sex marriage plebiscite and on climate change.

This sense of being out of touch, perhaps most strongly exhibited by Abbott’s continued insistence that he would come back to lead the Liberal Party if he was asked to, even when Liberal voters were strongly opposed to this , propelled Steggall’s attempt to wrest the seat from Abbott. 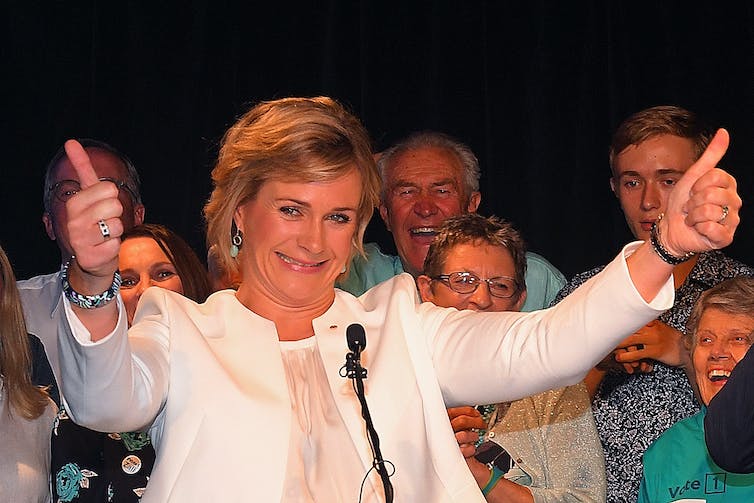 Abbott’s own preselection, which might have been thought uncontroversial, was a scene of anger and dismay. Although he won 68% of the votes to endorse him, this also implies that even party members were losing patience with his activities within the party.

The result in Warringah must be seen as a local phenomenon, especially when taken against the backdrop of the general election and the failure of some other high profile campaigns.

The GetUp! Campaign in Peter Dutton’s seat of Dickson would appear to have had limited effect, considering that Dutton had a 2% swing towards him. Several high-profile candidates who it was thought would struggle to retain their seats (George Christensen in Dawson, and Barnaby Joyce in New England) recorded double-digit swings towards them, suggesting their voters may or may not approve of their personal behaviour, but they do endorse the direction of their party.

This again emphasises the very localised nature of Abbott’s defeat. Far from a repudiation of Liberal values, it has been the repudiation of one individual’s form of political action. Abbott has been a polarising figure, and has been accused of some low politics in the past, although he would not be the only politician who that accusation has been levelled against.

It might then be argued the Australian parliament has lost one of its more colourful characters, but he is also the last of the characters from that 11 year period of Australian political life that saw five prime ministers dispatched, not at an election but while still in office.

Prime Minister Scott Morrison can at least look forward to not having to watch out for his predecessors.