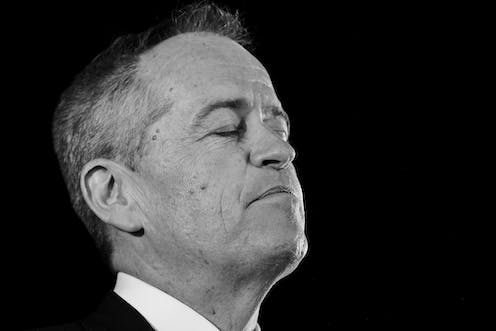 Polls had predicted a narrow win for Labor in this election, so what explains the Coalition victory? Data from the Australian Election Study (AES), based on public opinion surveys conducted after every federal election from 1987 to 2016, provide some indications as to what long-term trends likely contributed to the result.

This includes rising voter disaffection with the major parties and an associated rise in support for independents and minor parties. Adding to the problems for Labor was Bill Shorten’s lack of popularity among voters when compared to other party leaders over the past three decades.

And not least, Labor’s focus on tax policies in the campaign was unwise given the long-term view among voters that the party is less reliable on economic issues.

The rise of independents and minor parties

Voters have become increasingly dissatisfied with democratic politics in Australia. Although the Coalition did win enough seats to form a majority government, voters have been gradually drifting away from the major parties in recent elections and casting protest votes for minor parties and independents in greater numbers.

In this election, the historically safe Liberal seat of Warringah in Sydney went to the centrist independent, Zali Steggall. Another centrist independent, Kerryn Phelps, came close to defeating Liberal Dave Sharma in Wentworth for the second time in the past year. Voters in these electorates may align with the Liberals on economic issues, but they are socially much more progressive than conservative elements within the party.

While progressive voters in Sydney have increasingly moved toward centrist independents, many voters in Queensland, and to a lesser extent elsewhere around the country, moved to parties on the populist right. Many of the preferences for these parties were directed to the Coalition, contributing to the election outcome.

So, although the Coalition won enough seats to form a majority government, there was a small swing overall against both Labor and the Coalition in favour of minor parties, underscoring voter disaffection with traditional party politics.

Leadership is not the only factor that matters in elections, but it is important. According to AES data, in eight of the last 11 elections, the party with the most popular leader won. The exceptions are the elections won by John Howard in 1998 and 2001, and Paul Keating’s win in the 1993 “unlosable” election.

The Australian Election Study has been tracking leader evaluations based on surveys of voters since 1987, providing a good indication of what it takes, at the minimum, for a leader to win an election. The AES has found that generally around 10% of voters cast their ballots based on party leaders.

This can fluctuate depending on leader popularity. When a very popular Rudd was Labor leader in 2007, 20% of Labor voters cast their ballots based on the leader. In contrast, in the 2016 election when Shorten was leader, just 6% of Labor voters did so.

Read more: View from The Hill: Should Labor jump to new generation leader – and Morrison steal some Shorten policies?

Shorten’s unpopularity has been much discussed in the lead-up to this election. He consistently lagged behind Scott Morrison, and before that Malcolm Turnbull, as preferred prime minister, even while Labor outperformed the Coalition in polls on the two party-preferred basis.

Over the last 30 years, the least popular prime minister to win an election was Tony Abbott in 2013. According to AES surveys, his average evaluation by voters was 4.3 on a scale from zero (strongly dislike) to ten (strongly like). Despite being such an unpopular leader, he benefited from the leadership dramas between Kevin Rudd and Julia Gillard that dominated Labor’s time in government from 2007-13.

In comparison, Shorten’s evaluation in the same survey in 2016 was 4.2 out of ten, lower than any election winner on record. Moreover, the AES has been asking voters to evaluate the party leaders in terms of leadership characteristics since 1993, based on factors like strong leadership, trustworthiness, honesty, intelligence, competence, knowledge and the ability to be inspiring, compassionate and sensible.

The 2016 data showed that Shorten was the poorest performer across these characteristics as a whole in the 23 years the questions had been asked about major party leaders, scoring lowest on seven of the nine characteristics.

So, given this evidence from the 2016 election, why did Labor retain such an unpopular leader? First, the new rules surrounding leadership changes introduced by Rudd in 2013 made it more difficult not just to remove sitting PMs, but also to change the leader while in opposition.

Labor was also eager to project an image of stability following the years of infighting by Gillard and Rudd. Lastly, Labor performed better than expected in the 2016 election (despite the loss), giving Shorten a mandate to continue on for another shot in 2019.

In recent elections, health, education and management of the economy have been the main issues that voters mention most frequently in AES surveys.

Taxation has rarely been among the top issues in elections, the main exception being 1998 when the main issue was the introduction of a GST. But in this election, Labor chose tax policy as one of its policy centrepieces.

This choice was unwise for three reasons. First, Labor has consistently polled worse than the Coalition on taxation in AES surveys over the past 26 years, although the two parties did draw close in the 2016 election.

Second, Labor was unable to adequately explain its tax policies to the electorate in this election campaign. Studies show voters are influenced most by their perceptions of how party policy will affect the overall performance of the economy — what is called “sociotropic” voting. In the absence of a link between Labor’s tax policies and better economic performance in the 2019 campaign, many voters simply saw the proposed changes as an unnecessary imposition.

Third, Labor argued that the tax changes would affect only a small section of the electorate, typically less than one in ten. While the direct effect may have been small, this ignored the much larger group of voters who aspire to gain an investment property, for example, and might have been impacted by Labor’s policies.

Australia has some of the highest levels of property and share investment in the world. The 2016 AES survey found that one in ten respondents said they or someone close to them owned an investment property, while one in three owned shares. The proportion of the electorate potentially affected by Labor’s proposed changes was, therefore, quite sizeable.

Though many political analysts are searching for possible answers to the Coalition’s surprising win, the AES data suggests it wasn’t so surprising after all – long-term trends are consistent with a Labor loss, given the various factors in play in this election.