Sentences for most sex offences are getting harsher in Victoria, according to new data released on Wednesday by the Victorian Sentencing Advisory Council.

The data are for all cases sentenced in the County Court for certain sex offences over the five-year period from 2013-14 to 2017-18.

Are Victorian courts too lenient?

There is a common perception in Victoria that courts are too lenient on offenders – a perception the courts are well aware of. But demands for harsher sentences are often based on sensational and selective reporting of a small number of cases.

Anyone who watched Peter Kidd, the chief judge of the County Court of Victoria, sentence Cardinal George Pell in March will have noticed he spent over an hour explaining his decision. This is actually a typical duration for a sentencing hearing and demonstrates not just the complexity of the sentencing task in general, but also the care that judges take in explaining the sentence to victims, offenders and the general community.

Indeed, contrary to the popular belief that courts are too lenient, research with Tasmanian and Victorian juries over the last decade has repeatedly found that when members of the public are given all the information about a case – not just a dramatic snippet – most people would actually impose a lesser sentence than what the judge imposed.

In addition, when jurors were asked if the sentence the judge imposed in their cases was appropriate, nine out of ten said it was.

But there are some exceptions.

When jurors in sex offence trials were asked what sentence they would have imposed – without knowing what sentence the judge had given – half of them said a jail term longer than the judge’s, particularly for offences involving children.

What’s more, when the jurors from those trials were told what sentence the judge had imposed, 83% thought it was too lenient.

Sentences for sex offences getting harsher 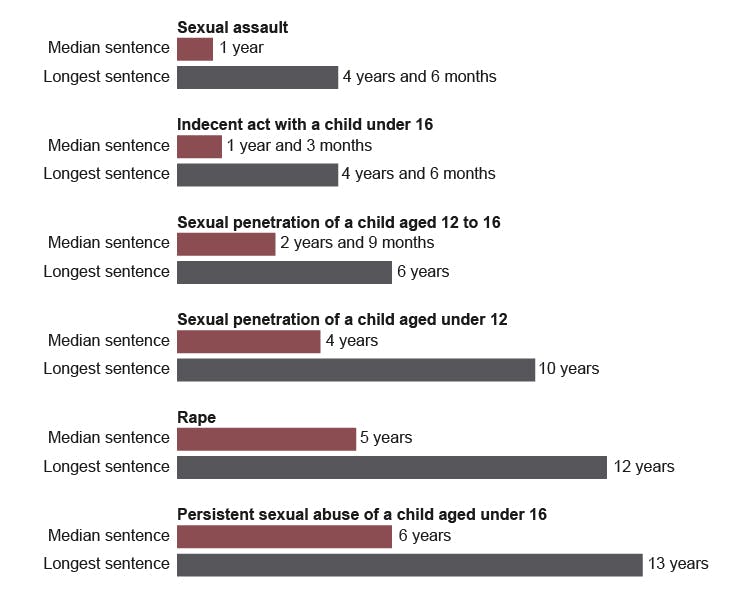 Median and longest prison sentences for sex offences in Victoria from 2013-14 to 2017-18. https://www.sentencingcouncil.vic.gov.au/snapshots-offence

The most interesting feature of the latest data released by the Sentencing Advisory Council is that the average sentence imposed for almost all of those offences increased significantly in 2017-18 compared to the average for the four previous years. In particular:

Prison sentences for sexual penetration of a child under 12, however, decreased by 2% (to four years). This is particularly concerning given that the council has previously found that sentences for this offence “re-enforce past norms” and do not reflect community expectations.

The council’s data reveal general trends, but these do not tell the whole story. It doesn’t reveal the many competing factors that judges must balance as part of the sentencing process for every case, such as the impact on the victim, whether the offender pleaded guilty, or whether the offender had mental health or substance abuse issues.

Before these statistics are used to level criticism at the courts, it is important to understand that there are complex stories behind the numbers.

Will sentences keep getting tougher?

Despite these longer average sentences for most sexual offences, many Victorians will likely still view them as not tough enough.

However, this upward trend in sentences is likely to be sustained in the coming years, due to several factors.

First, in late 2017, the High Court held that Victorian courts had been giving too much weight to past sentencing practices and that consistency should be just one of the many factors taken into account in sentencing. It should not be given primacy above other sentencing factors, such as the harm done to victims.

As a result of that High Court decision, Victorian courts have effectively been unshackled from the “gravitational pull” of past sentencing practices, especially in the context of sex offences, and can start imposing harsher sentences when appropriate.

Another factor is the government’s introduction of new standard sentencing laws for offences committed after February 1 2018. These laws require courts to consider imposing longer sentences than those currently being handed out for certain offences, especially sexual offences.

Indeed, the then attorney-general, Martin Pakula, said these laws were expressly intended to “increase sentences”.

We are yet to see the full effect of both of these changes on sentences in the state, but jail terms for sex offences are likely to only continue to increase, becoming more closely aligned with community expectations.