In 2002, I went on a bushwalk with plant taxonomist David Albrecht, and had a big surprise. He pointed to a plant I thought I knew, and said: “that’s probably a new species.”

A new species? How could it be that this plant had not already been scientifically described and named?

I was in for another surprise when I learnt there are estimated to be thousands of undescribed plant species in Australia. But just because one botanist says a plant is a new species, it doesn’t mean that everyone else automatically agrees.

As a researcher, I had the opportunity to study one of Australia’s most iconic plant groups – the eucalypts.

Herbarium records of an endagered eucalyptus species, the Northern Blue Box (Eucalyptus magnificata), showed populations from the Northern Tablelands in New South Wales scattered up to the Granite Belt in southern Queensland. 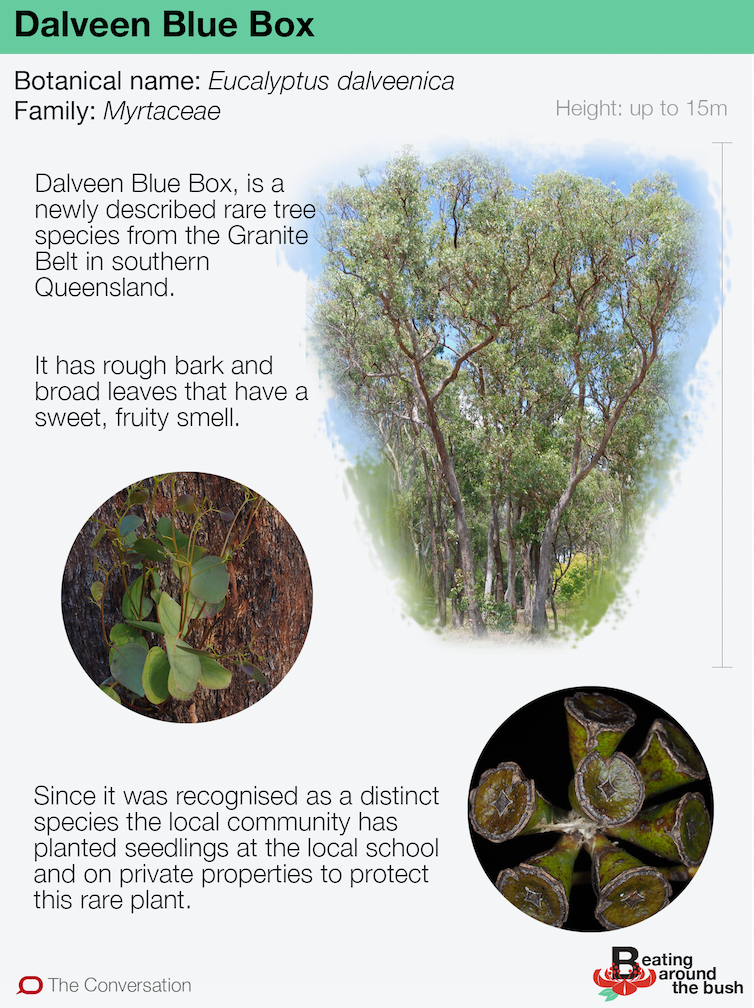 The Conversation But on closer inspection, I discovered there were different ecosystems between populations. E. magnificata, for instance, is found on rims of gorges in Oxley Wild Rivers National Park, whereas E. baueriana is typically found on riverbanks and flood plains. The question I wanted answered was: are all these populations really E. magnificata or have some been misidentified and represent other common species? Or, alternatively, are they new, undescribed rarer species? So when my supervisors, Professor Jeremy Bruhl and Dr Rose Andrew, and I visited the mystery trees near Dalveen in southern Queensland, we knew immediately they were something exciting. They just looked different to everything else we’d seen. Eucalyptus that smells sweet and fruity To find out, I’d been sampling eucalyptus (collecting, pressing and drying specimens) and had spent the past two days with my supervisors. With our heads craned back, we stared through binoculars to search the tree canopy at dozens of sites on the Northern Tablelands looking for the buds and fruits that enable eucalypt identification. 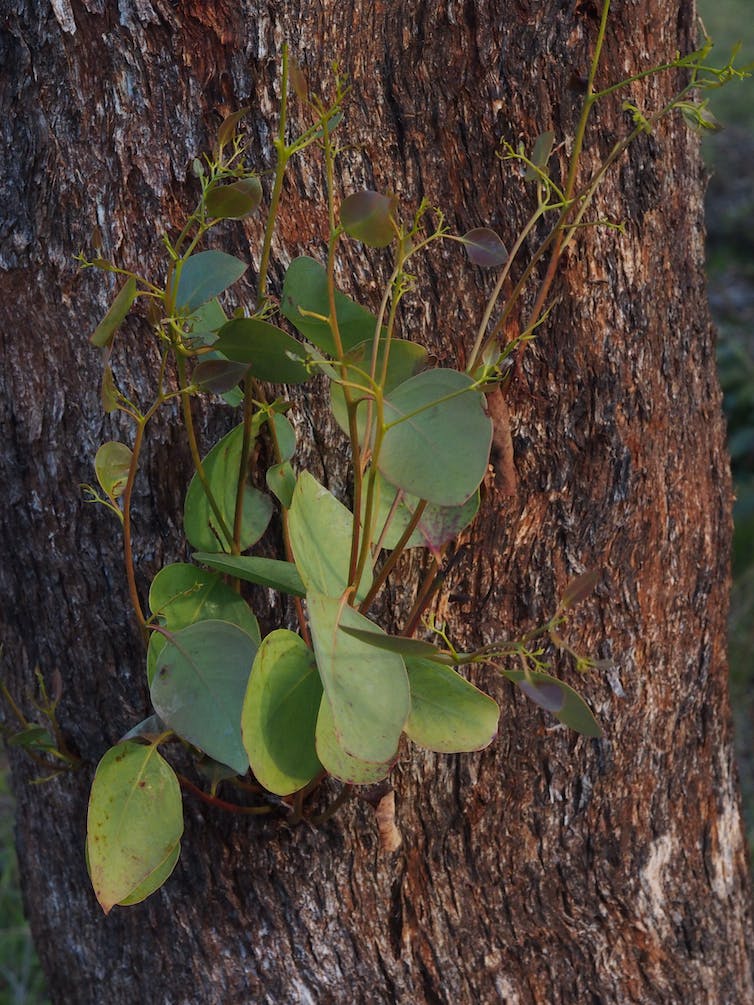 Crushing the leaves releases a sweet, mild and fruity aroma. Author provided (No reuse) Not only did these trees at Dalveen look unlike anything else we’d seen on the trip, they also had a different smell. When we crushed a leaf, the aroma was sweet, mild and fruity, quite unlike the familiar eucalyptus oil. Back at the university, I could compare the different collections. I examined and recorded differences in the size and shapes of the leaves, buds and fruits. I grew seedlings of my field collections and saw that seedling leaves were also consistently different. And I extracted the mixture of aromatic chemicals in the leaf oils collected during fieldwork. Then, I used a chemistry laboratory technique, called Gas Chromatography Mass Spectrometry, to compare their concentrations with closely related species, such as E. baueriana and E. polyanthemos. The results clearly explained why the leaves had a unique scent. That sweet and fruity aroma was due to larger molecules, called sesquiterpenes, which dominated the leaf-oil. There were only traces of the familiar-smelling cineole molecule common to most eucalypts. A new species, or just an uninhibited sex romp? Sequencing the DNA of the tree added another piece to the puzzle. We had collected samples from all of the closely related common species. We had strong evidence from the shape of the leaves, fruits and flower buds suggesting the Dalveen trees were different. But the possibility remained that they were just hybrids. Eucalyptus trees can be wickedly promiscuous and hybrid trees with similar characteristics are common. In some parts of eastern Australia, for instance, eucalypts naturally form hybrid swarms, the botanical equivalent of a wildly uninhibited sex romp! But the DNA told us the trees from Dalveen were genetically distinct, and with no suggestion of shared ancestry. Now, with three very different data sets all supporting the same conclusion, it became imperative we publish our findings and describe the new species, which we named Eucalyptus dalveenica, or the Dalveen Blue Box. New species have to be named using a universal and internationally accepted naming system. Names and descriptions must be published, and a pressed and dried specimen must be nominated to be the representative that other collections can be compared to. 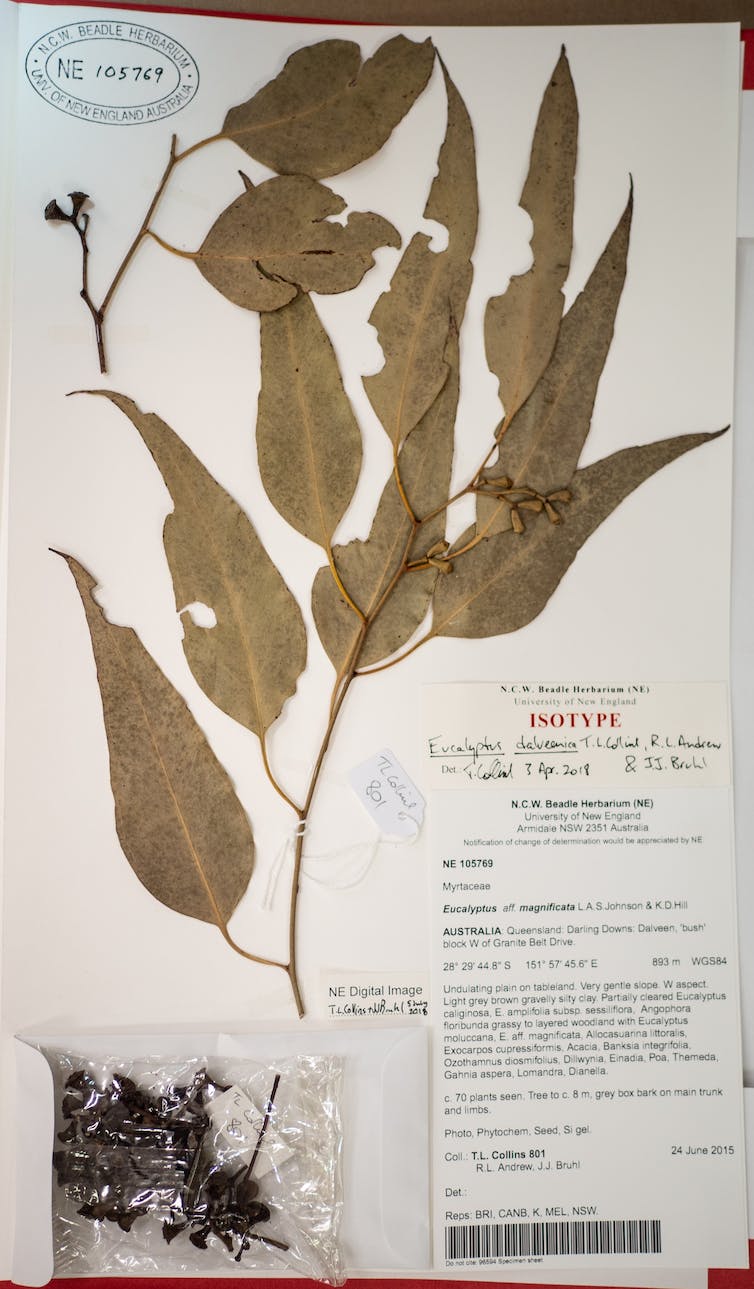 A pressed, dried specimen of a previously undescribed species is the representative other species can compare to. University of New England, Author provided (No reuse) Most importantly, convincing evidence must be presented that persuades the botanical community the newly named species should be accepted. But naming a new species is only the first step in knowing what it is. Importantly, naming tells us what it isn’t. The trees at Dalveen are not Eucalyptus magnificata, nor do they belong to another more common species, E. baueriana or E. conica. Eucalyptus dalveenica is a rare and endangered part of Australia’s natural heritage. Taxonomic description of new species (classifying, describing and naming) provides the framework for ongoing accurate identification, species conservation and further study. We are fortunate to live in a beautiful part of the world, with diverse and unique wildlife. Describing biodiversity and communicating new discoveries develops connections between people and their local environment, leading to a broader understanding of our home.