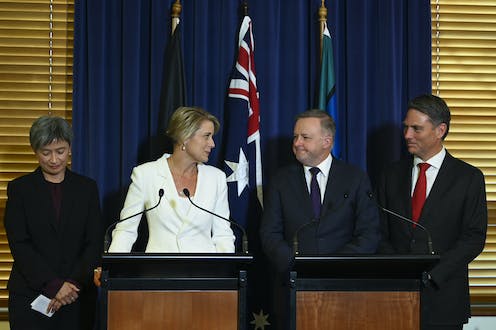 In his first excursion as leader, Anthony Albanese this week visited the Queensland electorate of Longman. This seat tells, in microcosm, the story of Labor’s success and failure, hopes and disappointment between 2016 and May 18 2019.

The ALP wrested Longman from the Liberals’ Wyatt Roy in the election in which Bill Shorten became a Labor hero by bringing Malcolm Turnbull within a whisker of defeat. Then on Super Saturday last July, Shorten held the seat, reinforcing his own leadership and undermining Turnbull’s. But on May 18, Longman went back to the government, as part of Queensland’s rejection of the ALP.

Labor this week has looked like a routed army forced to regroup while it is still bandaging wounds and burying its dead.

The leadership transition was the easy part, with Albanese the only candidate, after the party’s right couldn’t muster support for an alternative. But installing a new frontbench has been a messy process, exposing the downside of factionalism.

The factions are devotees of the “iron law of arithmetic”, so when Albanese demanded Kristina Keneally be given a place, someone in her NSW right faction had to bite the dust. It was especially unfortunate that this was Ed Husic, widely seen as a talented performer, who incidentally is only one of two Muslims in the caucus.

“It seems right that a man should step aside for a stellar woman to take over,” Husic told the ABC.

At the same time, a Muslim friend texted me, “What kind of ‘diversity’ is Albo’s ALP presiding over, when a Muslim-background MP is elbowed out from the frontbench in deeply Islamophobic times? Husic has been very supportive of Muslim communities.”

There were, one would have thought, better candidates than Husic for the sacrifice.

In the Senate, right faction player Don Farrell has also made room for Keneally, who has replaced him as deputy Labor leader there. She was able to mount a claim to this position on gender balance grounds – with Tanya Plibersek replaced by Richard Marles in the deputyship, the two top opposition posts are in male hands.

All in all, the path of the one-time NSW premier has been much smoothed. Keneally only entered the Senate at the start of last year, after a middling performance in the Bennelong byelection. Shorten made her his “bus captain” in the campaign, and planned to ensure she was in a Labor ministry. Albanese has gone out of his way to back her. Not all in caucus are impressed and she’ll have a good deal to live up to in the next three years.

Apart from the loss of Husic from the shadow ministry, the other bad outcome was the dropping of Andrew Leigh. He was shadow assistant treasurer but is non-factional, so he lacked muscle men to preserve his place. Leigh, a former economics professor, did a solid job, and Labor could always benefit from more rather than less economic talent.

And in the week when Ken Wyatt became the first indigenous federal cabinet minister, Indigenous senator Pat Dodson did not run for the frontbench. Wyatt is minister for Indigenous Australians, the post Shorten had foreshadowed Dodson would have. Dodson is likely, however, to be given some role on reconciliation.

Albanese will allocate portfolios, to be unveiled Sunday, and also announce parliamentary secretaries (the leader chooses these and this could, and should, provide an opportunity to use Husic).

Jim Chalmers, former finance spokesman, is set to be shadow treasurer. He’ll replace Chris Bowen, the architect of some controversial policies, notably the clampdown on franking cash refunds; in the pain of defeat, Bowen is being scapegoated by many. Chalmers, whom some wanted as a “new generation” leader, should be a credible economic face for the party.

Of particular interest will be what portfolio Shorten has. Of more concern, however, will be how the former leader sees his broad post-leadership role.

At this point, Shorten is not showing signs of taking much personal responsibility for the election disaster, although to be fair, he would still be in shock, and it is early days.

In the “grab” from his Thursday speech to caucus, Shorten lashed out. “We were up against corporate leviathans, a financial behemoth, spending unprecedented hundreds of millions of dollars advertising, telling lies, spreading fear.

"Powerful vested interests campaigned against us through sections of the media itself, and they got what they wanted,” he said.

“And I understand that neither of these challenges disappeared on election night. They’re still out there for us to face”.

To Labor voters he just offered “my regrets we did not win”.

Albanese, in his speech to caucus, struck a different note. “I accept my share as a senior shadow minister in the show, for the fact that we weren’t successful”.

Later at a news conference, he was open (as he has been since the election) in acknowledging the flaws in the franking policy, and the problem with “some of the language that was used” in the election (when Shorten targeted “the top end of town”).

More generally, Albanese’s emphasis before the election was different to Shorten’s and that’s also coming out in his early remarks as leader. He stresses his relationships with the business sector, the centrality of economic growth and jobs – and the importance of “aspiration”.

“ Labor will be seen, by all of us, our entire team, as being pro-business as well as pro-worker and I believe that’s exactly where Labor is and where we need to be,” he said.

Given Shorten has chosen to stay in parliament, it’s appropriate he has a shadow ministry and a substantial one at that.

But whether it is sensible for him, or good for Labor, that he remain in politics is another question.

He’s always been a factional player and he and Albanese have long been rivals. Adjusting to a diminished position, avoiding the temptation to criticise his successor even in private, being part of a team that has to move on from the Shorten-era policies – all that will be very hard.

If after a few months he feels he can’t do these things, Shorten should find another career.