Mount Agung volcano in Bali, Indonesia, has been erupting intermittently since November 2017. The volcano erupted six times in the last month and resulted in the cancellation and delay of some flights in and out of Bali’s Ngurah Rai International Airport.

Such continuous but sporadic volcanic activity is a challenge for local emergency management.

But it’s also an issue for planes.

Read more: Bali's Agung – using 'volcano forensics' to map the past, and predict the future

Captain Mike Galvin, head of fleet operations at Qantas Australia, told us volcanic ash in the air is a concern for airlines.

“The primary issue of volcanic ash for aeroplanes is the melting of ash in the engine turbines and the blocking of sensors that measure air speed and altitude. This can result in differences in flight information displayed to each pilot,” Galvin said.

“Qantas pilots are trained in these procedures during simulator training.

"Additional problems arise from reduced visibility due to the opacity of windscreens, and contamination of air entering the cabin.”

Currently the airline industry adopts a “no fly” policy for any visible or discernible volcanic ash.

“Engine and aeroplane manufacturers will not certify any level of ash tolerance,” Galvin said.

Ash is a serious problem for planes

Mt Agung is just the latest example of volcanoes interrupting flights in Indonesia and other countries.

In April 2010, an eruption of Eyjafjallajökull volcano in Iceland caused disruption to European air traffic for several days and cost the aviation industry an estimated US$250 million per day.

Volcanic ash is made up of volcanic glass, crystals and other rock fragments less than 2mm in size. Ash from explosive eruptions can reach into the stratosphere – 10-20km above the volcano, which is within the cruising altitude of commercial aircraft – and be dispersed by winds up to thousands of kilometres away. 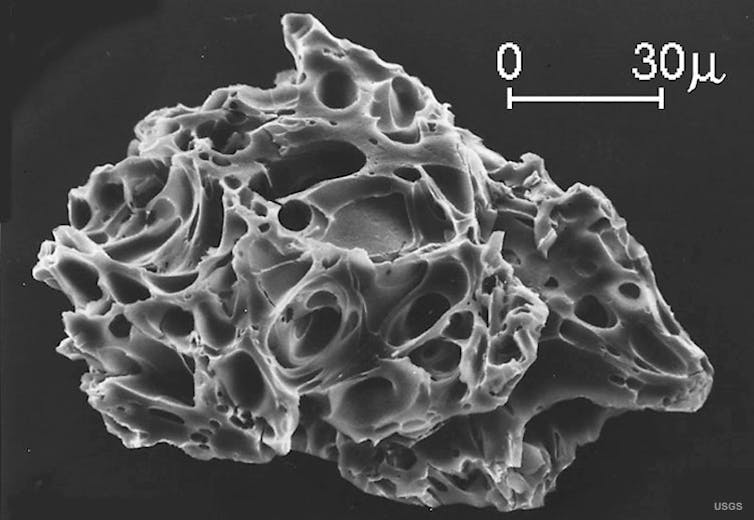 An ash particle just over 0.1mm long erupted during the 18 May 1980 eruption of Mount St Helens (magnified 200 times). USGS

The 1982 eruption of Mt Galunggung in Java, Indonesia, clearly demonstrated the potential impact of volcanic ash to aircraft.

Flight BA009 en route to Perth from Kuala Lumpur flew through ash from the eruption. This caused sulfurous fumes to enter the cabin and the failure of all four engines, which fortunately restarted after a dive to lower altitude.

Keeping watch on volcanic ash in the skies 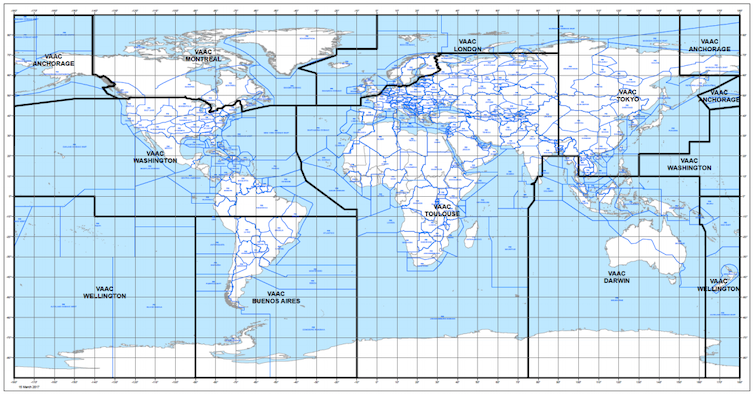 Map showing the nine volcanic ash advisory centres (VAACs) and the regions they are responsible for. Bureau of Meteorology

The role of the VAACs is to provide advice to the aviation industry about the location and movement of volcanic ash within their region. The VAACs gather information issued from local volcano observatories, satellite imagery and other available information such as volcano webcams, pilot reports, and online news.

VAACs perform detailed modelling for individual eruptions and issue images in the shape of a polygon (“ash polygon”) showing current ash-affected air, and where ash is predicted to move over the next few hours.

Qantas’ Mike Galvin said he makes safety decisions based on information gathered by his team using all available sources.

With regards to Bali’s Mt Agung, Galvin said getting the timing right is an important aspect of the process.

“Here in Australia we might be 5-6 hours away from the ash in Indonesia so we need to make decisions several hours before the plane departs,” he said.

Galvin works closely with the Darwin and Tokyo VAACs.

“But we also have our own team of five meteorologists on constant shifts, who utilise information from other sources such as satellite images from the Japanese Himawari satellite,” he said.

“If a polygon of ash lies over the destination airport or on its approach or departure path, then we will not land.” 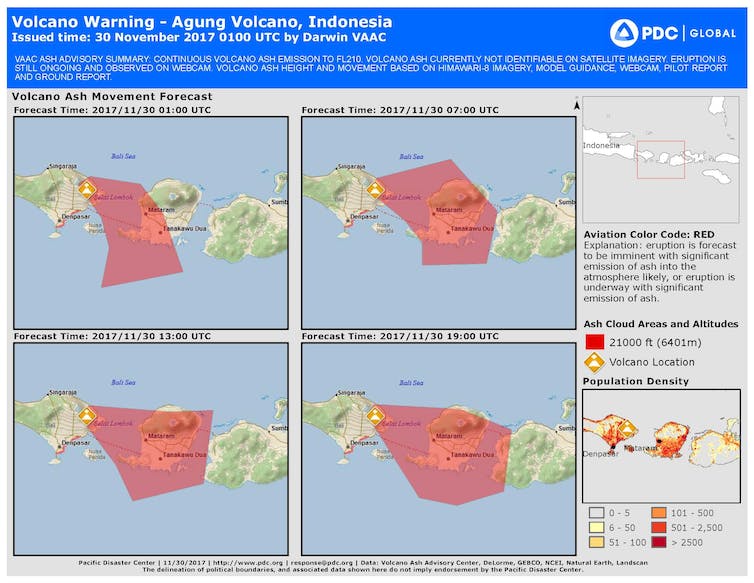 Example summary of the volcanic ash advisory from the Darwin VAAC at the beginning of the Agung eruption in November 2017. Ash polygons shown in red. Each picture shows the forecast of ash movement over a period of hours. OCHA/ReliefWeb/Pacific Disaster Centre using Darwin VAAC data

How science can help

Since the Icelandic eruption there has been increased research into volcanic ash impacts on aeroplane engines and how much ash they can tolerate.

While it is possible engines can tolerate low concentrations of ash, experts don’t yet know what the precise limit of ash that a particular engine can withstand. Further research is needed to determine this.

“Science can also assist the aviation industry though better assessment of the concentrations of ash at different altitudes such as at 20,000 and 30,000 feet,” Galvin said.

In the longer term, volcano science can help airlines understand more about volcanic ash hazards and risks to particular regions. For the Asia-Pacific region, average recurrence intervals have been calculated for each magnitude of volcanic eruption. This is measured by a Volcanic Explosivity Index (VEI).

To put VEI in context, the eruptions in the current phase of activity at Agung have been attributed a VEI of 3 on a logarithmic scale that runs from 0 to 8. It’s estimated we have 1.4 eruptions per year of this magnitude in the Asia-Pacific region. 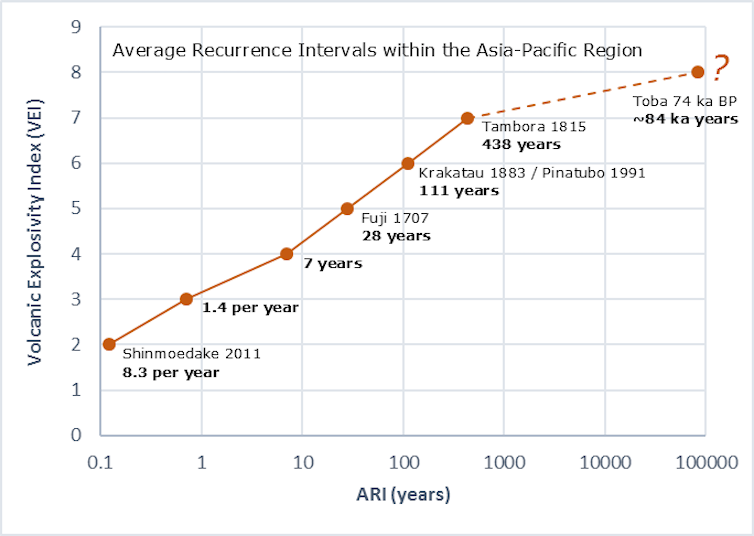 The 1883 Krakatau eruption in Indonesia and 1991 Pinatubo eruption in the Philippines were significantly larger, VEI 6 eruptions, which have been estimated to recur every 111 years in the region.

This raises the question of how well prepared the aviation industry is, and countries as a whole, for the next even larger VEI 7 eruption, such as that at Tambora in Indonesia in 1815, which erupted 175 cubic km of fragmented volcanic material in just 24 hours.

Recent scientific research on Agung suggests that the molten rock (magma) feeding Agung volcano below may also be connected to the neighbouring volcano, Batur. The connectivity of magma plumbing systems may explain the joint eruptions of both Agung and Batur in 1963 and may present an additional volcanic hazard to consider for Bali. 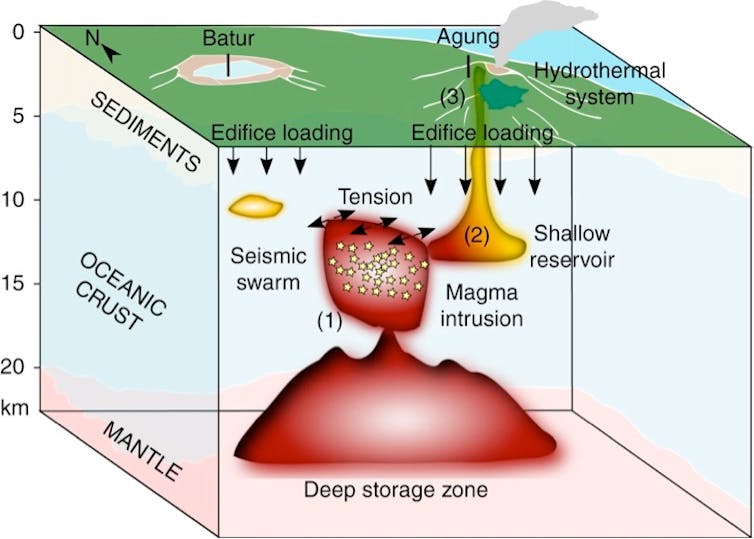 Intrusion of molten rock (magma) between the neighbouring volcanoes of Agung and Batur on Bali that was responsible for 2017 pre-eruptive seismic swarm at Agung. Albino et al., 2019, CC BY