The Melbourne-Sydney air corridor is now the second-busiest in the world. That’s true for either the number of passenger planes flying between the two airports or by counting actual passenger numbers, now over 9 million passengers a year. That’s an increase of 28% since 2009.

On an average day, some 12,330 people get on a plane in Sydney to fly to Melbourne. A similar number make the reverse journey.

Most passengers will have taken some time to get the airport and waited well over half an hour at the airport just to get on the plane. Once on board, the cramped conditions in economy once prompted comedian Jean Kittson to observe that even battery hens feel sorry for the passengers.

Read more: Let's get moving with the affordable medium-speed alternatives to the old dream of high-speed rail

Contrast this with getting on a high-speed rail (HSR) train that can travel at speeds of 250km/h or more from city centre to city centre on selected routes. Starting with Japan in 1964, these trains now operate in 12 countries in Asia, Europe, the UK, and now Morocco.

Australia’s high-speed rail investigations since 1984 have cost an estimated A$125 million in today’s terms. However, not even one kilometre of corridor has been reserved. High-speed rail has often been promised, often before elections (including a Melbourne-Geelong service in the latest one) – as The Chaser observed in 2016 – only to vanish afterwards. 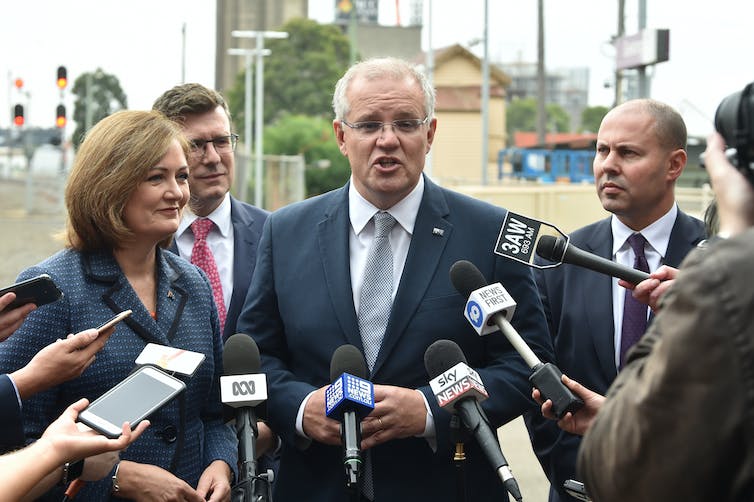 The Coalition’s election promises included A$2 billion for high-speed rail that would halve travel time between Melbourne and Geelong. James Ross/AAP

How does this compare to other countries?

Japan’s network has been slowly but surely extended, from the initial Tokyo-Osaka 515km Shinkansen in 1964 to more than 2,750km of lines on new dedicated track. More lines are under construction. To date, there have been more than 10 billion passenger movements with no loss of life from collision or derailment. 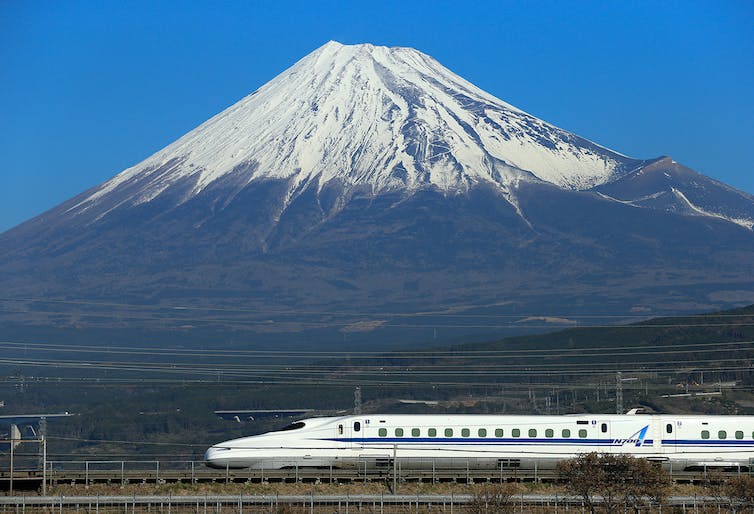 China has had a rapid rollout of trains moving up to 350km/h. Starting in 2008 with Beijing to Tianjin taking 30 minutes to cover 120km, China’s high-speed rail network now extends over 20,000km. This includes Beijing-Shanghai (opened in 2011 with a fatal collision that year) and Beijing-Guangzhou (the longest HSR route in the world). In 2018, the short Guangzhou-Hong Kong section opened.

Germany’s high-speed rail is of interest to Australia, with a mixture of new track construction (Neubaustrecken) one section at a time and upgrading of existing track. This progressively improves rail capacity and reduces travel times.

Many other countries have medium-speed rail, with trains moving at speeds of 160-240km/h. In Uzbekistan, for example, Talgo tilt trains take about 2 hours to move between Tashkent and Samarkand. This is a distance similar to Sydney to Canberra, which is currently a train journey of over four hours. 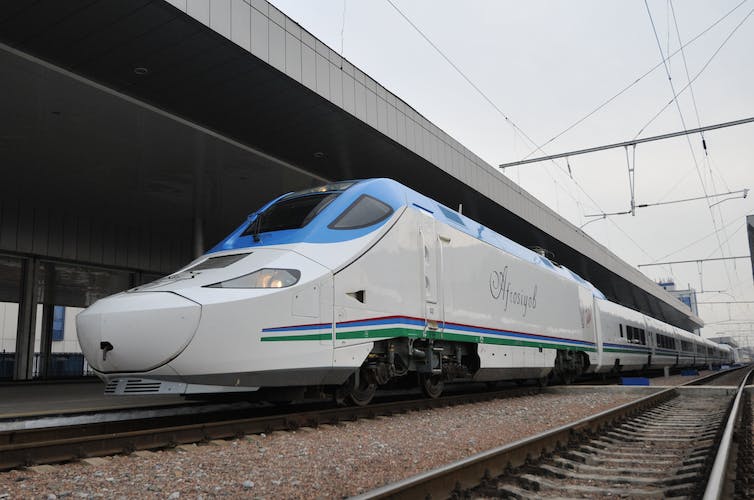 A Talgo Afrosiyob tilt train in Uzbekistan covers the same distance as the Sydney-Canberra line in half the time. Talgo, Author provided (No reuse)

High-speed rail has been studied repeatedly since 1984 in Australia. The Howard government raised expectations before the 1998 election with a Sydney-Canberra Speedrail proposal. John Howard said this “nation-building project” would deliver “ourselves – and our children – a visionary new transport system of which we can all be proud”.

The proposal was to use existing track from Sydney’s Central Station to near Campbelltown, then new track to Canberra airport. The train would take just 84 minutes to complete the trip. The cost was then about A$4.5 billion, with the private sector to finance all but about A$1 billion.

The Howard government withdrew support for the project in December 2000. Instead, it commissioned yet another study and shut down high-speed rail for another decade. 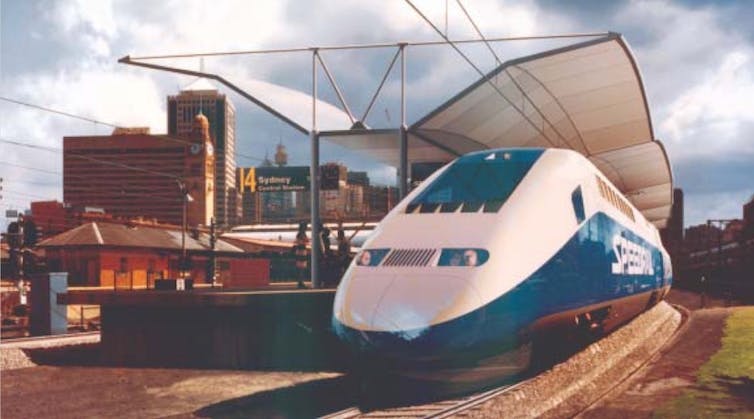 An image of how the Sydney end of the Sydney-Canberra Speedrail line would have looked. ARHSnsw Rail Resource Centre, Author provided (No reuse)

The Gillard government commissioned more studies. In 2013 the cost of a new Sydney-Canberra high-speed rail sector was estimated at A$23 billion with an east coast network to cost A$114 billion.

In its 2017 budget, the Turnbull government moved the focus to medium-speed rail or “faster rail”. The National Faster Rail Agency will come into being on July 1.

What are the prospects for faster rail?

There is a good case for pursuing “faster rail”, given the difficulties of making progress on high-speed rail. Australia could follow the lead of Germany and other countries in building isolated new sections of track to high-speed standards, one at a time. These sections can link with existing mainlines, to allow for new trains to run faster than cars.

This has worked well in Victoria since 2006 with the introduction of regional fast rail on four corridors. These trains run at up to 160km/h on upgraded tracks. Further track upgrading is under way in Victoria.

Queensland and Western Australia also have trains that can move at 160km/h on good tracks.

However, in New South Wales, the preponderance of mainline track with “steam age” alignment with many tight curves means intercity train speeds are too slow. The NSW government, along with ordering new intercity trains, has retained an overseas expert, Professor Andrew MacNaughton, to advise on high-speed rail versus faster rail and track upgrades to speed up trains. This is for the four main lines from Sydney to each of Newcastle, Orange, Canberra, and Wollongong.

These lines offer good potential to speed up trains by rebuilding old sections of track. In fact, between Sydney and Junee, there is scope to reduce the point-to-point distance by 60km to speed up freight trains plus reduce fuel use and emissions.

This track upgrade, along with tilt trains, would also allow the 11-hour Sydney-Melbourne XPT travel time to be cut to about six hours or less.