Australian news consumers access news less often and have lower interest in it compared to citizens in many other countries. At the same time, Australians are more likely to think the news media are doing a good job keeping them up to date and explaining what’s happening.

In comparison to the other countries, the survey of 2,010 online adults shows that Australian news consumers:

Read more: Australian political journalists might be part of a ‘Canberra bubble’, but they engage the public too

The survey finds almost half (48%) of Australian news consumers are “light” users, who access news once a day or less, whereas the global average across the 38-countries was one-third (34%).

Correspondingly, Australia also has the lowest number of “heavy” news consumers, who access news more than once a day, at 52%. This is compared to an average of 66% across the other countries. 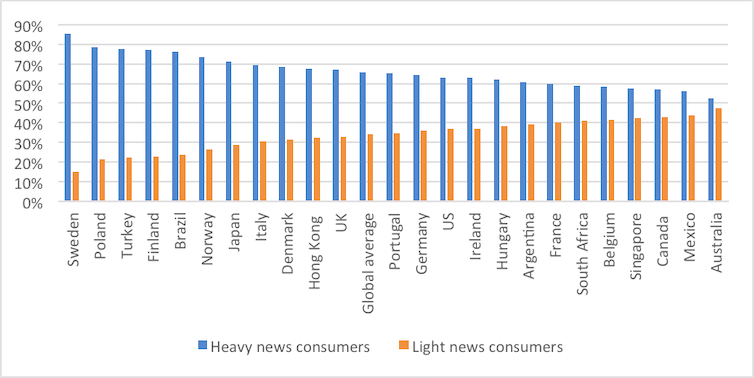 Reliance on a single news source

Australians also use fewer sources or platforms to access news. Just one third say they get their news from four or more sources, such as online, social media, TV, newspapers, social media and so on. This is well below the 38-country average of 44%.

The data tell us that Australians who rely on just one source of news also tend to consume less of it. Those who use four or more sources to get their news, also seek news more often. 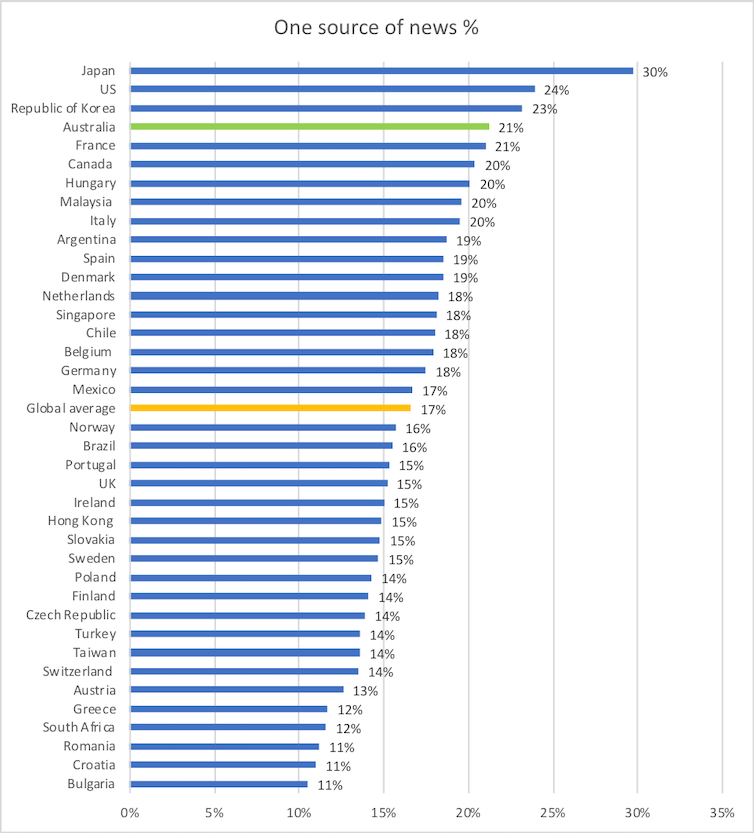 Participants were asked which, if any, of the following they have used in the last week as a source of news. Author provided

Preference for Netflix over news

Globally, news consumers are more likely to pay for video streaming services such as Netflix than news, but Australians have a stronger preference for entertainment over news than consumers in other countries.

This year, survey participants were asked whether they thought the news media in their country was doing a good job across five areas: 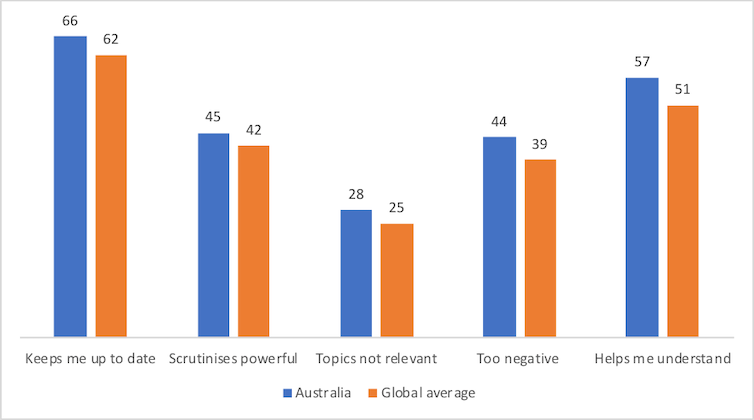 Participants were asked to indicate whether they thought the news media in their country was doing a good job or not according to five criteria. Author provided

According to the data, perceptions of news performance are strongly influenced by age and gender. Younger news consumers are the least likely to feel the news is relevant to them, particularly Gen Z women. This points to opportunities for more content that speaks to this age group.

Significantly, Australian news consumers who rely on legacy media for their main source of news, such as TV and newspapers, are more likely to think journalism is performing well. This highlights the ongoing importance of well-resourced traditional news brands as part of the hybrid mix of online and offline news sources.

The lower rates of news consumption in Australia can perhaps be explained by the fact that Australian news consumers are less interested in both news and politics.

58% of Australians say they have a high interest in news, which is below the 38-country average (60%). When compared to other English-speaking democratic countries (UK, US, Canada and Ireland), Australians and Canadians are the least interested in news, and Americans and UK news consumers are the most interested (67%).

When compared to other English-speaking democratic countries Australians are the least interested in politics, and news consumers in the US are the most interested (59%).

Participants were asked how interested, if at all, they would say they are in politics. Author provided

The connection between political interest and news interest is supported by a range of academic studies examining citizen participation in politics and the role of the news media. Generally speaking, the research finds a reciprocal relationship, but some types of news consumption inspire greater interest in politics than others.

Interest in news by age and gender

It’s possible that people’s interest in news and politics has been displaced. Rather than adverse events causing people to disconnect, their interest and attention has been drawn to other things. This is the primary thesis of the “attention economy”, and we see evidence of this in the levels of interest in news between genders and generations, and the platforms they tend to get news from.

Participants were asked how interested, if at all, they would say they are in news. Author provided

Read more: Mounting evidence the tide is turning on News Corp, and its owner

Trust in news and politics is low overall

A further contributor to Australians’ low interest in news could well be the general malaise among the Australian population toward the news media and politics. Research shows trust in politics, politicians and the news media to be at an all-time low.

This year’s Digital News Report also finds general trust in news is low, at 44%. Trust in news found on social media (18%) and search engines (32%) is even lower. Given that more Australians (57%) use online sources as the main source for news, this isn’t surprising.

Over the past year, there has been a lot of turbulence in the news media, with takeovers, closures, job losses and a leadership crisis at the national public broadcaster. This general turmoil in the news media was echoed in the corridors of power, with a third prime minister installed in as many years.

This overall climate of instability reflects a degraded political and news environment, which can be seen in some of the findings this year.