A parasite known to infect beaks in some iconic Darwin finches on the Galapagos Islands is changing the mating song of male birds.

Our research, published today in Proceedings of the Royal Society B, reveals how the parasite deforms the beak. This has the effect of weakening the male bird’s mating call, and making it no longer clearly distinguishable from that of other closely related species.

A changed song can have an important effect on the male finch’s ability to find a mate.

Read more: Simply returning rescued wildlife back to the wild may not be in their best interest

It’s another factor that could contribute to declining numbers of these already threatened birds on the Pacific archipelago, about 1,000km off the coast of South America.

A family song to impress

A male finch learns the mating song from his father, and produces the same song for the rest of his life.

Whatever species of finch you belong to, hitting the high notes is important – because females prefer males who can produce such vocally challenging songs.

In the case of the Medium Tree Finch (Camarhynchus pauper), a critically endangered species that only occurs on Floreana Island of the Galapagos Islands, its species-typical song has a bright resonance that rings across the forest canopy.

An accomplished male singer that can hit the high notes is quickly swooped up by a female looking to pair with a proficient singer.

The Vampire Fly – a suggested name for the parasite Philornis downsi given its blood feeding habits from dusk until dawn – was first discovered in a Darwin’s finch nest in 1997. 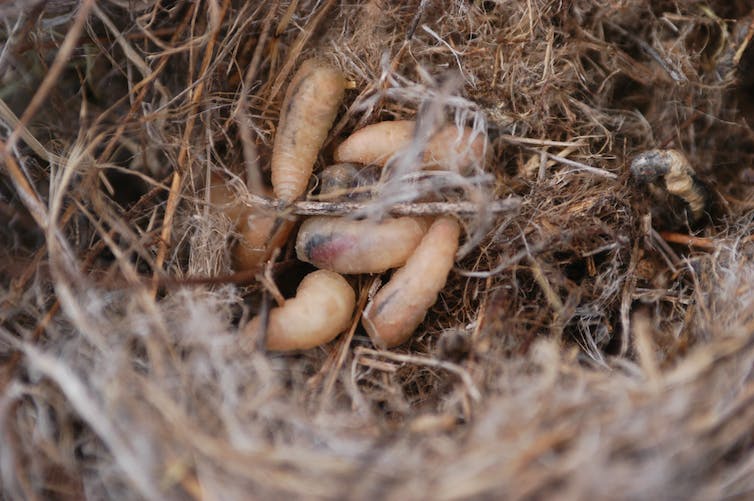 Since then, the devastating impacts of its larval feeding habits on nestling birds have been coming to light. The adult fly is vegetarian, but the females lay their eggs into bird nests and their larvae feed on nestling bird beaks from the inside out.

Many Darwin’s finch species now have beaks with massively enlarged nostrils because of damage the feeding fly larvae have caused during the nestling stage. We discovered that a changed beak apparatus measurably affects the song of Darwin’s tree finches with consequences for pairing success.

A Medium Tree Finch male with extremely enlarged nostrils is unable to hit the high notes.

Male finches that produce song with a narrower frequency bandwidth, because their song has a lower maximum frequency, have poor quality song. These males are less likely to be chosen by females, a pattern we documented in both the Medium Tree Finch and the Small Tree Finch.

But confusion among the species and their mating songs may not necessarily be a bad thing for the future survival of individual finches – though it could herald the collapse of species lineages.

Previously, we discovered evidence of hybridisation in Darwin finches. This is where two separate species of finch breed which could potentially produce a new species, phase out one of the species, or cause the collapse of the two existing species into one.

When a female Medium Tree Finch inspects male Small Tree Finches in the forest, she pairs with one who produces high quality song, even if that male is from another species. 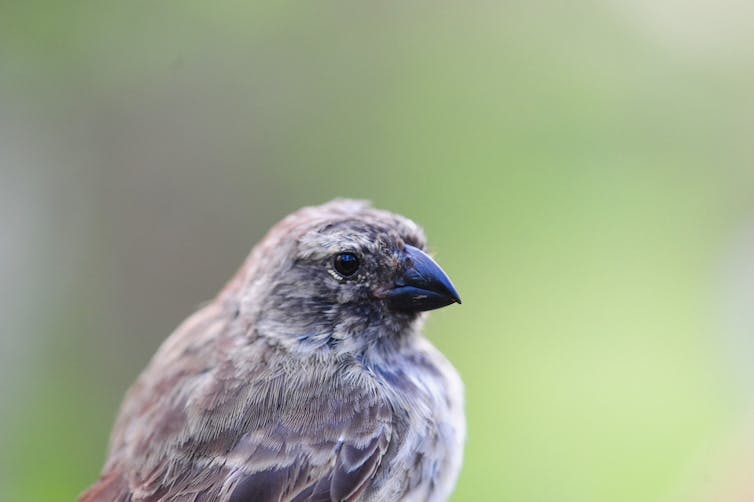 A Tree Finch with a normal beak and nostril size, so no infection from the parasite. Katharina J Peters, Author provided

This female choice seems to be paying dividends, because hybrid pairs with greater genetic diversity also sustained fewer of the parasitic larvae in the nest. And that could lead to fewer birds with infected beaks.

Read more: Galapagos species are threatened by the very tourists who flock to see them

There are concerted efforts underway to develop control and eradication methods for P. downsi on the Galapagos Islands, building on a collaborative relationship between the Charles Darwin Foundation and the Galapagos National Parks. The Philornis downsi Action Group is an international consortium of concerned scientists working to develop biological control methods.

Our new research is an important step towards understanding how this invasive fly may be changing the evolutionary pathway of Darwin’s finches by literally changing the beak of the finch.